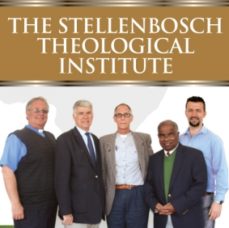 Historically it has always appeared that the Traditional and the Charismatic churches have been at odds with each other because of theological and liturgical differences. Yet with the proliferation of liberalism in and out of the Church, Christians with a Biblical worldview and correct theological application of the Word of God are uniting – from all sides of the denominational spectrum.
An example of this on our doorstep would be the new found relationship between two significant role players in the Body of Christ, who have partnered together to form a Bible-based Theological Institute in the heart of South African Liberaldom. JOY! found out more from the stakeholders, extracted below.

‘Coincidence’
“There are many combinations in life that just work and seem to form a better product in the end: peanut butter and jam, salt and pepper, boerewors and pap. Yet somehow the Anglican Church and the Shofar Movement don’t immediately jump to mind when considering successful synergy.
So how then can an Evangelical Charismatic pastor from Shofar and a priest from an established Traditional Anglican Church see eye to eye on anything? We’re talking chalk and cheese! But add a Mighty Lord, two intuitive, God-fearing wives and a prophetic word – and you’ve got yourself a great friendship that has led to significant and strategic things.

Crisis
It all started several years ago when pastor Fred May received a prophetic word during a Sunday service in Stellenbosch that the Lord was going to send them ‘unlikely bedfellows’ or ministry partners. In another part of the Cape, Father Gavin Mitchell a local Anglican priest, was experiencing what can only be described as persecution in the politics of his local church.  Disillusioned and disappointed, Gavin contemplated moving to the Church of England or leaving the ministry entirely. Eventually he accepted a posting to another church to relieve the pressures of ‘local church politics’.

Communication
At this time, Gavin and Fred’s wives “coincidently” met each other. Lynn and Lucille, both God-fearing women, served as the catalyst for their husbands’ friendship.

Conviction
As the relationship deepened, both Fred and Gavin realised that despite their different ministry environments, they both laboured for the same Almighty God and that the areas of agreement far outweighed the points of disagreement. They shared convictions about truth, the authority of Scripture, and the centrality of Christ, His Spirit and His Word. After all, the core beliefs of both Shofar as a charismatic renewal church and Orthodox Anglicanism are Evangelical. Both men were “eager to maintain the unity of the Spirit in the bond of peace”  and “to equip the saints for the work of the ministry for building up the Body of Christ…”
With an urgency to see the Kingdom established, the men acknowledged that in a broken world they would need to fight side by side in God’s army.

Conflict
In the years since the providential meeting of these two friends in faith, the Anglican Communion has been thrust into a world-wide crisis over the position of Scripture as the final authority for both doctrine and morality. The Fellowship of Confessing Anglicans (FCA) was formed in response to the crisis by Orthodox Anglican leaders from across the world and Father Gavin was appointed as Secretary of FCA Southern Africa in 2009.
The so-called ‘Anglican Crisis,’ which has been well documented in previous issues of JOY! Magazine and has crystallised around moral issues, continues to be about the authority of Scripture and whether God, through His Word, has the right to tell us what is morally acceptable or not (Biblical Christianity), or whether people have the right to decide for themselves (Secular Humanism).

Convergence
Was this the battle that God had intended these two men, representing two spiritual streams, to engage in? Their ‘coincidental’ meeting had been orchestrated by God years before and His reason for doing so was becoming apparent. Shofar has always been eager to stand with those who stand for the Gospel, and that meant amongst others, standing with the FCA in the battle for the Bible.

Completion
In light of this, both leaders have identified the need to deepen the Theological training of Pentecostal/Charismatic pastors and to re-establish the centrality of the Bible in the Theological training of Anglican clergy, as priorities. For this reason they have jointly launched the Stellenbosch Theological Institute (STI) as an academic training institute which endeavours to be Bible-based, contextually relevant, and academically excellent.
So, like peanut butter and jam, these two streams seem to work well together in the form of STI, drawing from the established and the emerging.
With the January intake for academic centres looming, we spoke to Hennie Swart, Director of the Stellenbosch Theological Institute to find out about their mission and mandate.

Why have you become involved in theological education?
I come from a tradition that is rather suspicious of theological education because of the damage done by many liberal theologians, but I also read a Bible in which the greatest church planter of the early church is a theologian – the Apostle Paul. Theology clearly isn’t all bad, and the remedy for bad theology is not no theology, but rather good theology. For my tradition, therefore, theological education can and should be redeemed.
The Stellenbosch Theological Institute (STI) is intending to do just that by providing accessible education and training that is Bible-based, contextually relevant, and academically excellent.  We seek to develop leaders with the competence, character, and courage to engage their cultures in a constructive way. Another defining feature of STI is that it’s a collaborative partnership between Shofar Christian Church – a Pentecostal-Charismatic church movement, the FCA Southern Africa, which is part of the mainline Anglican Church, and the Oxford Centre for Religion and Public Life – a UK based research centre.

Why did the role players start STI?
Most of the modern world no longer has a reading culture and many, if not most, Christians are Biblically illiterate and don’t have a Biblical Christian worldview.
The most effective way to address this problem is to develop Christian leaders with a love for the Bible which they can impart to those around them; the Church needs Scripturally trained leaders.

Can anyone study with STI?
Any graduate, even from a non-theological discipline, can study with STI.  We cater for those who are in full time ministry as well as Christians in other fields ((such as business, politics, media, or education) who are passionate about Scripture and its application in their personal and professional spheres. Because the course is internet-based, it is accessible and affordable.

Why start another theological institute; aren’t there enough in SA?
Many state-funded institutions are becoming more and more liberal and eventually end up as schools of comparative religion. Much of the Church seems to be losing faith in these liberalising institutions and no longer trust them to train their future leaders.
STI, in contrast, will be held accountable by the Church so that it can continue to produce leaders who are actually useful and beneficial to the Body. In addition there are few, if any, institutions that currently cater for a Pentecostal-Anglican convergence and facilitate dialogue between these traditions.

How does the School of Anglican Studies fit into the programme?
The Anglican studies leg of the programme is in development and will be nested in the generic Honours in Theology.  Anglican students will be required to complete certain prescribed options like Anglican -foundations, -worship, -mission, and -ecclesiology when doing their degree.

Who is involved in STI?
Shofar Christian Church, FCA Southern Africa (Fellowship of Confessing Anglicans) and OCRPL (Oxford Centre for Religion and Public Life) are the founding partners of STI. The following world class lecturers will be presenting the different modules:
• Dr. Rollin Grams: is an Associate Professor of New Testament at Gordon Conwell Theological Seminary in America
• Canon Dr. Vinay Samuel: is recognised internationally as a mission theologian. Together with Dr. Chris Sugden, he founded the Oxford Centre for Mission Studies in the UK. He is the Executive Director of the Oxford Centre for Religion and Public Life which he presently leads
• Canon Dr. Chris Sugden: is an ordained minister of the Church of England. He was part of the founding team of the Oxford Centre for Mission Studies. He serves as secretary of the Anglican Mainstream Network and several other organisations
• Dr. James B Krohn pastors Cates Hill Chapel in Canada. He taught theology for more than a decade at two of South Africa’s most respected theological colleges after completing his Masters Degree under Prof JI Packer at Regent College in Canada, and his Doctorate at Stellenbosch University. 

Fred May
• Biography: Fred and his wife Lucille founded Shofar Church in Stellenbosch in 1992.  He has been committed to ministry establishment since his high school years.  The dynamic of cultural and generational integration has always been a mark of Shofar’s ministry where the focus areas are disciple making, leadership development and church planting.  At present there are 29 Shofar churches in South Africa and abroad – besides scores of missions partner churches planted in Africa and Asia.  Fred and Lucille have two sons, Stephan and Matthew.
•  Contact details:
www.shofaronline.org

Gavin Mitchell
• Position: Secretary of Fellowship of Confessing Anglicans – Southern Africa. Director of the Anglican Studies programme of the STI. An Anglican priest presently serving in the Cape

• Comments about The Stellenbosch Theological Institute: “This joint initiative for training is one of the most exciting developments for the Church for more than 50 years. For two such different traditions to work to provide church planting and mission focussed leaders for our churches is truly of God.”

• Contact details:
www.fca.net
Details
• Courses: In January we offer an Honours in Theology in partnership with SATS (The South African Theological Seminary).  The course is structured as a part-time, distance learning programme which is internet based

• Prerequisites: The Honours qualification mentioned above is a conversion course, in the sense that students do not need an undergrad degree in Theology to be admitted to the programme.

• Exceptions: Students will be admitted providing they graduated in a cognate degree like Humanities/Social Sciences or have sufficient ministry experience and a non-cognate degree

• Format: The programme is an internet based course, available locally and internationally

• Future plans: In the short term, we intend to develop Masters, PhD, and possibly undergraduate programmes and have them accredited by the relevant authorities. Long term we may launch a Business-, Media-, and Leadership School

• Contact details: To register for an Honours in Theology (Bth Hon) visit www.stionline.org.za