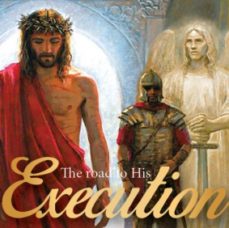 It’s early in the final week. The props and players for Friday’s drama are in position. Five-inch spikes are in the bin. A crossbeam leans against a shed wall. The players are nearing the stage – Pilate, Annas and Caiaphas, Judas, the centurions.
Players and props. Only this is no play; it’s a divine plan. A plan begun before Adam felt Heaven’s breath, and now all Heaven waits and watches. All eyes are on one figure – the Nazarene. Commonly clad. Uncommonly focused. Leaving Jericho and walking toward Jerusalem. He doesn’t chatter or pause. He’s on his final journey.

His final journey
Even the angels are silent. They know this is no ordinary walk or week. For hinged on this week is the door of eternity. He knew the end was near. He knew the finality of Friday.

Let’s walk with Him. Let’s see how Jesus spent His final days. Enter the holy week and observe. Feel His passion. Sense His power. Hear His promise that death has no power. Let’s follow Jesus on His final journey. For by observing His, we may learn how to make ours.

In the Garden
“Then they came to a place which was named Gethsemane; and He said to His disciples, “Sit here while I pray.” And He took Peter, James, and John with Him, and He began to be troubled and deeply distressed.”  Mark 14:32–33.
Go with me for a moment to witness what was perhaps the foggiest night in history. The scene is very simple; you’ll recognise it quickly. A grove of twisted olive trees. Ground cluttered with large rocks. A low stone fence. A dark, dark night.

A true reflection of Christ’s turmoil
Now, look into the picture. Look closely through the shadowy foliage. See that solitary figure? Flat on the ground. Face stained with dirt and tears. Fists pounding the hard earth. Eyes wide with a stupor of fear. Hair matted with salty sweat. Is that blood on His forehead?

That’s Jesus. Jesus in the Garden of Gethsemane. Maybe you’ve seen the classic portrait of Christ in the Garden. Kneeling beside a big rock. Snow-white robe. Hands peacefully folded in prayer. A look of serenity on His face. A halo over His head. The painter didn’t use the gospel of Mark as a pattern. When Mark wrote about that painful night, he used phrases such as these: “Horror and dismay came over Him,” “My heart is ready to break with grief,” and “He went a little forward and threw Himself on the ground” Mark 14:32-42.

Mark used black paint to describe this scene. We see an agonising, straining, and struggling Jesus. We see a “Man of sorrows” Isaiah 53:3. We see a Man struggling with fear, wrestling with commitments, and yearning for relief. We see Jesus in the fog of a broken heart.

When you suffer, think of Him
The next time the fog finds you, remember Jesus in the Garden. The next time you think that no one understands or cares, reread the 14th chapter of Mark and pay a visit to Gethsemane. And the next time you wonder if God really perceives the pain that prevails on this planet, listen to Him pleading among the twisted trees.
The next time you are called to suffer, pay attention. It may be the closest you’ll ever get to God. Watch closely. It could very well be that the hand that extends itself to lead you out of the fog is a pierced one. No wonder they call Him the Saviour.

The Cross
To the casual observer the six hours of the crucifixion are mundane. A shepherd with his sheep, a housewife with her thoughts, a doctor with his patients. But to the handful of awestruck witnesses, the most maddening of miracles is occurring. God is on a cross. The Creator of the universe is being executed.

Spit and blood are caked to His cheeks, and His lips are cracked and swollen. Thorns rip His scalp. His lungs scream with pain. His legs knot with cramps. Taut nerves threaten to snap as pain twangs her morbid melody. Yet, death is not ready. And there is no one to save Him, for He is sacrificing Himself.

It is no normal six hours. it is no normal Friday. For worse than the breaking of His body is the shredding of His heart. His own countrymen clamour for His death. His own disciple planted the kiss of betrayal. His own friends ran for cover. And now His own Father is beginning to turn His back on Him, leaving Him alone.

You need to respond!
Let me ask you a question: What do you do with that day in history? What do you do with its claims? If it really happened…if God did commandeer His own crucifixion…if He did turn His back on His own Son…and if He did storm satan’s gate, then those six hours that Friday were packed with tragic triumph. If that was God on that Cross, then the hill called Skull is granite studded with stakes to which you can anchor your soul forever. 