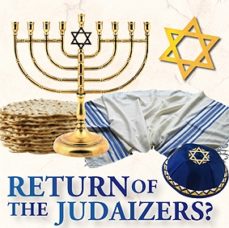 The Return of the Judaizers
More and more Christians are being confronted by an increasingly vocal and volatile movement which is hostile to the Christian calendar and vehemently insisting that to be a true Christian you have to adopt the Jewish culture and calendar.

Confronting controversy
One would have thought that this controversy had been settled at the first Church Conference in Jerusalem recorded in Acts 15. The Judaizers were insisting that you could not be saved without adhering to the Jewish law.

The Apostle Peter opposed the Judaizers by reporting on how God poured out His Holy Spirit on the gentiles: “So God, who knows the heart, acknowledged them by giving them the Holy Spirit, just as He did to us, and made no distinction between us and them, purifying their hearts by faith. Now, therefore, why do you test God by putting a yolk on the neck of the disciples which neither our fathers, nor we, were able to bear?” Acts 15:8-10. The Apostle Paul and Barnabas testified to the miraculous works of God among the Gentiles. James pointed out how this was the fulfilment of many prophecies and he declared: “Therefore I judge that we should not trouble those from among the Gentiles who are turning to God, but that we write to them to abstain from things polluted by idols, from sexual immorality and from things strangled and from blood.” Acts 15:19-20

The conclusion of the Jerusalem Conference is recorded in Acts 15:22-29. In it the Apostles, elders and brethren of the church in Jerusalem dissociated themselves from the Judaizers who were “unsettling your souls” by requiring observance to Jewish ceremonial law “to whom we gave no such commandment.”

The council decreed: “For it seemed good to the Holy Spirit, and to us, to lay upon you no greater burden than these necessary things:” to abstain from idolatry, immorality and blood. There is no mention here of the Jewish Sabbath, or any of the many distinctives being insisted on by modern Judaizers.

The Books of Galatians, Colossians and Hebrews were particularly written to oppose the false teachings and legalism of the Judaizers. “I marvel that you are turning away so soon from Him who called you in the Grace of Christ to a different gospel, which is not another, but there are some who trouble you and want to pervert the Gospel of Christ. But even if we, or an angel from Heaven, preach any other gospel to you than what we have preached to you, let him be accursed. As we have said before, so now I say again, if anyone preaches any other gospel to you than what you have received, let him be accursed.” Gal 1:6-9

A new bondage
Paul pointed out that “not even Titus who was with me, being a Greek, was compelled to be circumcised.” Gal 2:3. Paul described the Judaizers as “false brethren” opposed to “our liberty which we have in Christ Jesus that they may bring us into bondage, to whom we did not yield submission, even for an hour, that the Truth of the Gospel may continue with you.” Gal 2:4-5
Paul rebuked those who “were not straightforward about the Truth of the Gospel… knowing that a man is not justified by the works of the law but by Faith in Jesus Christ… that we might be justified by Faith in Christ and not by the works of the law; and by the works of the law no flesh shall be justified.” Gal 2:14-16

Bewitched!
“I do not set aside the Grace of God, for if righteousness comes through the law, then Christ died in vain.” Gal 2:21 Those who today are seeking to reject our Christian calendar and Reformation heritage and bring us back under Jewish culture and law need to read the words of the Apostle Paul:
“O foolish Galatians! Who has bewitched you that you should not obey the truth, before whose eyes Jesus Christ was clearly portrayed among you as crucified? This only I want to learn from you: Did you receive the Spirit by the works of the law, or by the hearing of Faith? Are you so foolish? Having begun in the Spirit, are you now being made perfect by the flesh?” Gal 3:1-3

Christianity did not embrace Judaism. Rather the reverse
There is no need for us to insist that all Christians only refer to God by His Hebrew Names. It is God’s express Will that He be worshipped in every language and tongue (Rev 5:9-13). This has always been a Protestant distinctive, to translate the Scriptures into every language and tongue. After all, the New Testament was not written in Hebrew, but in Greek.

The Church father Ignatius wrote in AD100: “It is absurd to profess Christ Jesus and to Judaize. For Christianity did not embrace Judaism, but Judaism Christianity, that so every tongue that believeth might be gathered together to God.”

Christian liberty
“Stand fast therefore in the liberty by which Christ has made us free, and do not be entangled again with the yoke of bondage … and I testify again to every man who becomes circumcised that he is a debtor to keep the whole law. You have become estranged from Christ, you who attempt to be justified by law; you have fallen from Grace.” Gal 5:1-4

The Sabbath
Modern Judaizers claim that we are not observing the true Sabbath unless we are observing it on Saturday. Instead of being concerned about the why of the Lord’s Day, they are more obsessed with the when. Some even claim that the Emperor Constantine is the one who changed the Sabbath from Saturday and the reason we observe it now on Sunday is because this Caesar of Rome established the tradition in AD325.

Celebrating Christ’s Resurrection
Whereas, in the Old Testament, the Jewish believers observed the last day of the week as the Sabbath in commemoration of the Lord’s work of Creation, Christians celebrate the Resurrection of Christ Jesus from the dead and His work of re-creation, looking forward to the New Heaven and the new earth – the everlasting Kingdom of God brought about by Christ’s victory over death, hell and the grave – in His Resurrection.

The Church fathers
The early Church fathers, long before Constantine, taught that Christians should set aside the first day of the week as the Lord’s Day. These included Barnabas and Polycarp. Justin Martyr in AD150 wrote: “Sunday is the day on which we all hold our communion assembly, because Jesus Christ, our Saviour, on the same day, arose from the dead.”

Clement of Alexandria, in AD194 wrote that: “Believers (in fulfilment of the precepts according to the Gospels), keep the Lord’s Day.” Tertullian, in the second century, wrote that on the first day of the week, “on the Lord’s Day, Christians, should, in honour of the Resurrection of the Lord, defer all worldly business.”

“Now on the first day of the week, when the Disciples came together to break bread …” Acts 20:7. The Scriptures further teach: “Let no one judge you in food or in drink, or regarding a festival or a new moon, or Sabbaths, which are a shadow of things to come, but the substance is of Christ.”  Col 2:16-17