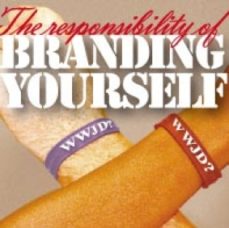 The Responsibility of Branding Yourself

In a world dominated by brands, many Christians have taken to wearing the popular What Would Jesus Do (WWJD) bangles and other attractive Christian accessories such as cell phone pouches, keyrings and bumper stickers.

The idea behind these Christian emblems, and in particular the WWJD bangles, is to identify oneself as a Christian, who is committed to living and behaving the way Jesus would. WWJD asks a question, it confronts one with a choice of how to act in a Godly way in any given situation. The armbands were designed to firstly challenge the Christian to behave uprightly, and to act as a mark for unbelievers to see Christian’s living the example of Christ.

In theory, these emblems are excellent markers and tools for Christians to reflect the Gospel in their daily activities. The problem creeps in when the bracelets function as ‘fashion’ items and lose their purpose.

The choice hovers between our natural response or Jesus’ response. For example; I’m driving my car and some guy pulls right in front of me and slows down. I’m about to lose my rag when I’m aware of WWJD on my armband so my temperature drops and I calmly proceed, with a smile, till I can drive past – because this is what Jesus would do if He were in this situation. My two passengers, one a Christian and the other not, are very impressed with my reaction and I feel like I’ve achieved something. I have displayed, in a practical way, what Jesus would do.

“What would Jesus do?” It’s more than a question.
The WWJD phenomenon is a wonderful, Holy Ghost inspired idea. It has borne immense righteous fruit to the good of the Kingdom. Many have testified of the challenge that has come to their lives through WWJD, serving to bring our Heavenly Father honour. The emergence of the WWJD culture has taken the Christian world by storm. Every Christian knows what it’s all about. While you’re reading this, you’re either wearing WWJD or you know someone who does. In all probability, you will see it displayed somewhere within the next 24 hours.

WWJD is not hidden. In other words, it’s not a subliminal message or disguised.  It is emblazoned where everyone can see it. A stark declaration of our intent and allegiance. We who wear it want people to see it. It is our flag. It distinguishes us as one who follows the Way. We are Christians and proudly ask “What would Jesus do?” It stands out like one of those lit–up crosses you’ve seen on a hilltop at night as you pass through a town in the dark.

Accountability is the key
It is admirable that Christian people are prepared to bring themselves to accountability with such a compelling question. As I’ve explained, this is by no means a private affair. We ask the question before the whole world so we must answer it before the whole world. The world is not ignorant and the world is not inhabited by idiots who cannot see when they’re being patronised. They know as well as you and I what Jesus would do.  They care more about what you do. The world hates hypocrites.

As Christians, we have to be critically aware that we bare overwhelming testimony to our faith in Jesus Christ. We can also just as quickly destroy someone’s positive perception of our Lord and be a bad testimony. The very credibility of the Gospel is at stake if we abuse our witness and get drunk, treat others badly, steal, lie and succumb to road rage. It is a stark reality that for all the good fruit that WWJD has produced, in the wrong hands, it can be a real tool of the enemy of the Gospel if abused by irresponsible believers.

When a believer slips on the WWJD armband, he’s shouting out his commitment. He’s saying, “What Would Jesus Do? Watch me. I will show you.!” By publicly displaying WWJD, he is announcing his intent. He’s stating his acceptance of accountability and openness to scrutiny regarding his character, behaviour, integrity and his decisions. He’s saying I will ask the question before I act and when I act, watch me, you’ll see what Jesus would do right now if He were here in the flesh.

Does he then really have the right to present anything less through his lifestyle choices? I understand that none of us can claim perfection but that’s the whole point! It’s our very fallibility and humanness that gave birth to WWJD in the first place. This is not an excuse for behaving badly. God teaches us to count the cost and we must proceed seriously and cautiously before we pursue any Christian endeavour.

Don’t become a fashion victim! Lead the way.
Often the one to pay the price for our shortcomings is someone else. In the case of a believer not doing what Jesus would do, despite his public announcement to the contrary, the Kingdom of God pays the price. The testimony of the whole Church is mocked and degraded when WWJD becomes a mere fashion item or identity badge.

The enemy can’t take WWJD away but he can neutralise it by turning it into some meaningless jargon, lost among so many other weak, garbled voices. We must not let that happen. We must protect the validity and the authority of the Christian witness through the statement of WWJD. We must watch ourselves and each other. It must be an honour to wear it. It must work for the Kingdom. We’re ambassadors for Jesus Christ.

The only way we can truly be representatives of God, and know what He would do in a situation, is to know Him and His Word. Start today, and find out from the Scriptures, what Jesus would do and say!