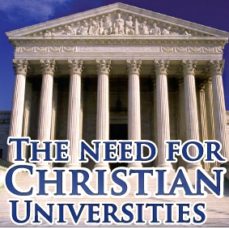 The original formation of universities, as centres of learning, was a Christian idea despite most modern universities being distinctly secular institutions. It was the early church fathers who nurtured the idea of assimilating and integrating early classical philosophy into learning, giving Christendom a rich heritage of intellectualism and scholarship.
In medieval Europe and Britain, universities arose with the involvement of the Church and in America the first universities were founded as Christian centres of learning.

The Christian foundation of learning
However, this all began to change with 18th Century Enlightenment when reason became a central concept and the primary source of authority, giving rise to secular academies with Biblically and theologically-independent methods of acquiring true knowledge. This loss of the overarching theological universals, combined with new faculty who cared little for the faith, led to division between different learning disciplines and to islands of knowledge and learning. Today faith and reason are no longer entwined in the search for truth and these institutions have little or no desire “to think God’s thoughts after Him”. They now consider themselves merely sources of knowledge (or expertise) and moral wisdom, meaning and purpose have become largely passé with little rationale for character development.

Growth within Christian education
Today the argument for Christian universities is compelling as they can again be centres of comprehensive learning where the fear of the Lord, and theology, once the queen of all sciences, can be integrated into the beginning of wisdom and moral character. Different worldviews may be explored and articulated as components of developing of the authentically Christian mind.
Considering Christianity’s historic role in fostering education it should not be surprising that the number of Christian universities is rising around the world in the wake of the unprecedented Church growth in Africa, Asia and Latin America. Even in sub-Saharan Africa, the historically most educationally disenfranchised region of the world, the demand has continued to grow.

The benefits of private education
As higher education comes under the strains of needing to accommodate expanding numbers of students and the costs associated with education, the temptation is to take a reductionist approach and simply provide information and expertise at the expense of the combined formation of character in serving God, the common good and the welfare of nations.
Here, private education is most at risk to being driven by cost-cutting enterprise; this is where Christian private higher education is uniquely positioned to be a blessing in providing a value driven education.

The looming crisis in government tertiary education
Since the advent of public schooling about two hundred years ago, education systems all over the world had to grapple with two challenges: one is provision and another is delivery of teaching and participation in learning.  Very few education systems can cope with these two challenges equally well and our country is no exception.
We do not have to look very far to see that education in South Africa is in a mess. Any assumption that we need not be concerned will be quickly washed in the sea of anomalies provided by the plethora of evaluations, assessments and other comparative constructs that emerged over the last ten years. We lag so far behind in almost any measure of achievement in the important areas of numeracy, mathematics and literacy. The recently published Annual National Assessment (ANA) results provide further evidence:
• We are a very high-cost but low-performing education system
• South Africa was the worst scoring country out of the 40 countries on the 2006 PIRLS (Progress in International Literacy Study)
• In  the SACMEQ (The Southern and Eastern Africa Consortium for Monitoring Educational Quality) South Africa was place 9th out of the 15 countries participating in Mathematics and Science – and these are countries which spend less on education and are not as wealthy as we are
• In the ANA of 2011 Grade 3 learners scored an average of 35% for literacy and 28% for numeracy while Grade 6 learners averaged 28% for literacy and 30% for numeracy.
It is clear that we are in trouble and that it will take a long time to turn the ship around because the problems are deep. South Africa consistently spends about 4.5% of its GDP on education compared to 3.1% and 2.9% in developing and sub-Saharan countries respectively and three times more than Latin America spends on each learner.
Our problem is rather poor returns on investment. In addition to poor learner performance, the South African education system seems to do poorly on basic systems of efficiency indicators: the learner dropout rate almost trebles from 1% in grade 2 to 2.7% in grade 7 and further burgeons to 11.8% in grade 11.  In 2009 only 60% of the population up to 23 years of age completed grade 11 and only 44% completed grade 12.
Higher education has to deal with three intertwined challenges within this context: access, massification (expansion) and quality.

Challenges for higher education
Given the interest in higher education and the intense battle for the limited number of places at public universities, it is clear that there is no poverty of aspiration among our school leavers. We see the intense struggle for admission at some of our universities every year.
Secondly there is the challenge of massification: there are plans to increase the student numbers at public universities from about 850 000 to 1.5 million over the next 20 years and at FET colleges it is hoped to increase the numbers from 400 000 to 4 million in the same period.
Thirdly there is the important issue of quality. It is unfortunately the case that although there are some pockets of excellence, the majority of public schools do not fit any definition or description of a quality school. If there is one word that describes what we see in most situations, it would be dysfunctionality. Dysfunctionality in school is directly linked to weak leadership and management. If this capacity is not there, then simply to add resources or teachers will not bring about the necessary change.  Universities are facing a tremendous challenge to be flexible about entrance standards while remaining rigid about exit standards.

Training citizens for life
One important consequence of the focus on the immediate need to provide learners with the knowledge, skills and competencies to participate in an economy of the 21st Century, is that we forget to ask ourselves the more fundamental question: What kind of people do we want to see coming out of our school system as the citizens of a transformed and admirable society? And universities have to ask the obvious follow-up question: What kind of teacher, curriculum and educational ethos will be needed in order to produce such people?

The need for Christian universities
The South African tertiary education landscape is dominated by the 23 public universities that in 2011 enrolled nearly 900 000 students (nearly 300 000 in UNISA alone). Although enrolment figures are not readily available for the 117 private tertiary institutions that are registered or provisionally registered with the Department of Higher Education and Training, it is safe to assume that students in private tertiary institutions comprise less than 10% of the total. Among the 117 private institutions in South African, approximately 23 (20%) identify themselves as Christian institutions. However, only a handful of those offer subjects other than theology.

Imparting Biblical values
This is usually maintained by the practice of hiring only Christian faculty, by cultivating a Christian ethos and by designing curriculum that reflects a Biblically-shaped and Christ-centred worldview. Such an approach to higher education provides students with a solid Christian foundation for their chosen field of study.
Christian universities also provide the opportunity for students to reinforce and further develop alternative values to those generally accepted by society. For example, one could expect that discussions of ethics in a Christian university would be informed by a Christian value system rather than a utilitarian or humanistic value system.
This difference in values is often evident even in the way Christian students approach higher education. Many of them have a clear sense of a call to service, whether through vocational Christian ministry or through service in another career.

Excellent education standards
Christian universities provide a supportive environment in which such students can be encouraged to see such vocations as an extension of their Christian commitment, giving of themselves in service to God by serving others.
There are a handful of Christian higher education institutions in South Africa that offer academic programmes in disciplines other than theology. Although these insti tutions are small in comparison to public universities, they must meet all the same quality assurance requirements as any other higher education institution in South Africa and often deliver a quality of academic programmes on par with or surpassing the standards of public universities.

Consider Cornerstone Institute
For example, Cornerstone Institute in Cape Town, which offers psychology qualifications at the bachelors and honours levels, recently had one alumni and one current student accepted into a psychology masters programme for 2013 at one of the public universities – out of only six candidates accepted into the programme!
Such an achievement is a clear indicator of the academic quality that Christian universities in general – and Cornerstone Institute in particular – are able to provide.
Christians looking at varsity options should consider the programme offerings available through such institutions. Churches and Christian individuals can also make a real difference in society by supporting Christian universities through donations and/or support of deserving students. In these ways the whole Christian community can be involved in reshaping the worldview and values of our society.

Holistic Christian higher education
Within educational circles there is an oft-repeated expression, “head, hands and heart,” referring to a holistic approach to education. Such an expression underscores the fact that knowledge is not only about thinking, but also about doing and being. A head-hands-heart approach focuses on humans as tripartite beings, comprised of mind, body and soul. Teachers that adopt such an approach focus on engaging the head (mind), hands (body) and heart (soul) of the learner.

Teaching learners to live like Christ
Admittedly, it is much easier to measure the achievement of outcomes that focus on knowledge and actions (skills) than those that focus on feelings or choices. But it is possible to design curricula that provide opportunities for students to engage in learning activities that incorporate all elements. Thus at Cornerstone Institute lecturers are encouraged to design learning sessions that not only stimulate students’ minds, but also their other faculties.
In the context of Cornerstone, this is done by addressing spirituality as a subject throughout the curricula of various programmes. But spirituality is also developed through a weekly chapel experience for both staff and students, through providing counselling and mentoring opportunities, and through shared meals.
Holistic Christian higher education should ultimately lead not merely to an academic qualification, but to a life that is increasingly reflective of Christ.