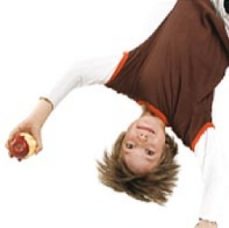 The Myth of ADD – Biblically Redefined

THE CHILDREN OF OUR NATION are in trouble.  A million AIDS orphans, school violence, teenage pregnancies, drug abuse!  Sin and worldly parenting approaches are wreaking destruction among our children.
However, another devastating, silent, destructive epidemic is sweeping our nation – that of ADHD (Attention Deficit Hyperactivity Disorder).  The real danger here though is that many well-meaning parents are being led astray rather than finding help for their children. They are desperately seeking answers to this problem but are being caught between the crossfire of inadequate medical approaches, and the huge lucrative pressure of the pharmaceutical industry that is pushing a drug which offers limited and temporary help at best, as it primarily treats only some of the symptoms of the problem.
In this brief article on ADHD we wish to point to a secure direction that will effectively give help, hope and a solution to Christian parents and children battling with the ADHD dilemma.  We begin by clarifying what ADHD is NOT.

ADHD IS NOT EASY TO DEFINE
Recent literature emanating from the medical and psychological world begins with the presumption that ADHD is now a defined medical disorder.  This is not the case at all.  Behind this apparently specific definition lies a fog of evolutionary influence. Their definition has ultimately been formulated not around any clinical source or physiological condition, rather, observed behavioural problems and concentration difficulties that have been progressively categorised, and then labelled.  Over the years, as new symptoms have been observed, so the label has been extended from ADD to ADHD and so on. In their quest to respond to these ever increasing behavioural problems, widespread confusion exists as new symptoms have been incorporated into the evolving definition as the wave of behaviourally unstable children has increased.

ADHD IS NOT ABLE TO BE OBJECTIVELY DIAGNOSED
Having categorized the behavioural and concentration symptoms, the psychological world has then made the great leap to subjectively define these categorized symptoms as a ‘disorder’.  This  despite the fact that there is no medical diagnostic test to verify that ADHD is indeed a physiological condition, or has any resultant physiological impact that is traceable in the body.   On the basis of this unfounded leap, their next dangerous step was to deduce that one of the major means to deal with this now classified ‘disorder’ is via the use of strong Schedule 5 or 6 medications in order to try to suppress aberrational behaviour and thus stimulate more focused concentration.
This is all based on the subjective observation of expressed symptoms and the subjective determination that these symptoms constitute a medically treatable disorder.  Very little attention has been given to whether such aberrational behaviour and concentration difficulty could be directly precipitated predominantly by reversible developmental and environmental influences.

DHD IS NOT GENETIC
Although in the medical world there are numerous dogmatic claims that ADHD is genetic, there is no medical evidence that can validate this claim.   How can it possibly be genetic if it is impossible to trace any objective clinical or physiological source?

WHERE TO FROM HERE?
The loudest voices speaking today about ADHD are that of the world.  But where is the voice of the Christian?  What does God have to say about ADHD?  Rather than find the answer to this question, most Christian parents are trying to find the best specialist, the latest medication, the next programme.  Many do not realise that Biblically-directed Christian parents are the ones mandated by God as the only adequate specialists for dealing with behavioural problems in their children.
Life Enrichment Ministries has worked with many families battling with ADHD.  This ministry is fundamentally a Biblical counselling ministry where people are discipled to grow and walk in God’s way with His help through His Word.  Our conviction that principles from God’s Word hold the answer to this vexing problem, led us to write the book “The Myth of ADD Biblically Redefined” in order to give Christians much needed spiritual insight.
The principles and methods in this book have been put into practice by many families with whom we have worked over the past years. God has transformed ADHD children into people pleasing to Him and others. We are not surprised at this “success” because we firmly believe that God’s Word gives “all that we need for life and Godliness” (2 Peter 1:3), especially when it comes to effective and balanced living.

WHAT LIGHT DOES GOD’S WORD SHED ON THE PROBLEM OF AN ADHD CHILD?
The common understanding is that ADHD is either seen as a physiological disorder or a disability with regard to the intellect of the child, which results in him/her being unable to behave or think in a concentrated, focused way without distraction. We agree that the behavioural and concentration symptoms categorised by the psychologists are present.  We strongly disagree as to their cause and remedy.  Our contention is that the problem does not lie in a physiological disorder, nor in the intelligence capability of the child, but in emotional age-typical immaturity.   One of the important goals of parenting is to developmentally shape a child progressively through Biblical culture and structure in the home, so that stage-by-stage they will reach age-typical emotional maturity.  Emotional maturity is attained as the parent works daily on a consistent basis with the child.   This work is done in the context of a deliberately formulated Biblical family culture and structure.
Family culture is an environment that the child is born into – created beforehand in the home by Godly parents, who in a Godly marriage have already established a home run on Godly standards.  The child born into this home imbibes Biblical principles taught and modelled in a structured, principled way, which moulds and shapes the child into progressive emotional maturity, a maturity that assists them to handle their intellect and interpersonal interactions in a balanced manner.
When Biblical family culture and structure are lacking or temporarily disturbed in the home, the particular emotionally affected child will independently and immaturely attempt to control his/her world so that he/she can create their own security.  The emotional immaturity and selective focus of the child will primarily be demonstrated in behavioural and concentration problems with focused application of themselves being a significant difficulty.
Well-meaning parents who desire the best for their children, may be experiencing this in their home and not know how to rectify this, because they have been unable to define the cause.  The answer lies in following God’s way, but this will not be a quick fix.  It involves hard work and time commitment.  It involves remedially confronting issues that have needed to be dealt with, but which may have been avoided or inadvertently overlooked, this particularly around structure in the home.   The remedial implementation of God’s plan is not the easiest way, but it is a road that will lead to lasting rewards.  God is faithful.  He does give families the strength to do all that is needed, and He will ensure they see fruit for their labours.