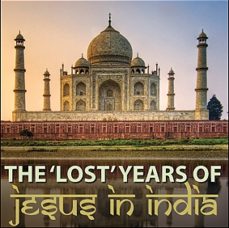 The ‘Lost’ Years of Jesus in India
The Bible’s silence concerning the 18 years of Jesus’ life between the ages of 12 to 30, has caused a number of speculations about this period in the life of Jesus Christ by New Agers and Buddhists and Hindus [whom they refer to as Issa]. Of these, the most notable is the idea that Jesus travelled widely [between India and Tibet] where he studied with  Buddhist and Hindu teachers. He is apparently buried in Kashmir, having survived His crucifixion.

Claims made by New Agers
In his book, ‘Jesus Lived In India’, Holger Kersten claims that Buddhism had a significant influence on the life and teachings of Jesus during this period. While his work is regarded as ‘scholarly’ in New Age circles, Kersten asserts that Jesus lived the life of a Buddhist, practiced Buddhism and that Jesus taught Buddhist ideals to His disciples, something that, according to Kersten, “can be discerned in His Sermon on the Mount”! Kersten furthermore avers that “many of the teachings of Jesus – things like Karma and reincarnation – have been edited out of the modern Bible by the Church who are intent on keeping Christ in their doctrinal top pockets in order to constrain the entire Western culture within the narrow teachings of blind faith, organised religion and original sin!” (sic).

Exposing satan’s strategies
Throughout the history of the world, satan has consistently employed three stratagems in his assault upon the Christian faith. He has focussed his attack upon:

Scripture: satan has worked to dispute the historicity, the authority, the veracity, the accuracy as well as the authenticity of the Bible as the revealed Word of God
Christ: satan has schemed to challenge the person, the incarnation, the life, the teaching as well as the Resurrection of Jesus the Christ
Gospel: satan has tried every ploy to twist God’s plan of salvation by grace alone through faith alone in Christ alone.

Counterfeit assumptions
When Jesus is presented as nothing more than just another ‘sage’ whose teachings were strongly influenced by His Eastern masters, we are able to spot every one of satan’s devious wiles at work. What attempts to pass for ‘scholarly’ investigation into the life of Jesus, instead fails as a feeble effort by the god of this age (2 Cor 4:4) to assail the magisterium of the Bible, strip Jesus of His Divinity, and to adulterate the Gospel. There are several arguments that refute the idea that Jesus spent His ‘lost years’ travelling widely and especially into India where ‘He came under the influence’ of and in fact, ‘adopted a Buddhist lifestyle’, that He somehow ‘survived His crucifixion and now lies buried in Kashmir in India’. Very briefly they include:
1. Scripture: it has been shown that the Bible is the best-attested manuscript from ancient history that we have in our possession with +24 000 manuscripts available for us to study.

To quote a source that can hardly be regarded as sympathetic to the Christian cause (Time Magazine): “After more than two centuries of facing the heaviest guns that could be brought to bear, the Bible has survived, and is perhaps better for the siege. Even on the critics’ own terms – historical fact – the Scriptures seem more acceptable now than they did when the rationalists began the attack.”

In short, we can trust the Bible to be the revealed Word of God: not only is the historical authenticity of the Bible beyond objective dispute, but its explanatory power has no equal.

Proof of the truth
2. Christ: concerning the life of Christ, the Bible says nothing about Jesus travelling outside of Israel. Instead, it describes the ‘lost years’ of His life with one verse: “And Jesus grew in wisdom and stature, and in favour with God and men” Luke 2:52. This covers roughly the time between the ages of 12 and 30, after which Jesus began His public ministry. Since the writers of the Gospels had been with Christ and had direct access to His history, we can assume that they would have mentioned something as important as Jesus travelling outside of Israel during those years. And they did not. Moreover, historical logic argues against such a claim: Jesus was not known as a world traveller, but rather as “the Carpenter” Mark 6:3, and “the carpenter’s Son” Matt 13:55.

Biblical and logical thought
Furthermore, the New Testament records that Jesus the Christ fulfilled a score of Old Testament prophecies concerning His birth, life, death and Resurrection, none of which mention any journey to the East. Rather, the East came to Him when the Magi, after spotting a star in the East, travelled to Jerusalem “to behold the King of the Jews” Luke 2:1-2. “And we have the word of the prophets made more certain, and you will do well to pay attention to it, as to a light shining in a dark place, until the day dawns and the morning star rises in your hearts.” 2 Peter 1:19. The only journey to the East mentioned in the Bible is the one included in Christ’s Great Commission to take the Gospel to all nations (Matt 28:18-20).

Disproving New Age and Buddhist theories about Jesus
3.Gospel: perhaps the most compelling argument against the idea of ‘Jesus the Indian Buddhist’, is the fact that the pantheistic tenets espoused by Buddhism  simply do not square with the message of the Gospel of grace taught throughout the Scriptures (Old and New Testaments) and that are fully expressed in Jesus the Christ. This fact is especially significant if one considers that the Gospel represents the most coherent but also the only satisfactory response to the human condition!

Contradictory teachings
Pantheism is the idea held by most Hindus, many Buddhists and New Age religions which says that ‘God is all in all’. In other words, pantheism holds that God pervades all things, contains all things, subsumes all things, and is found within all things.

Two incompatible belief systems
Pantheism fails as a coherent world-and-life view on several counts: because of this view of the ‘oneness of God and reality’, it teaches that all forms of individuality are ‘mere illusions caused by the mind’. But if that is the case, then so too the very claim itself is an illusion! In this we see that pantheism refutes itself as a world-and-life view on just this one count! Biblical theism on the other hand, recognises objective reality, something that is absolutely necessary in order to qualify all truth claims as well as value judgements to be meaningful.

As a religion of immanent moralism and because it disavows any objective reality, Buddhism is simply not able to advance any basis for its moral teaching – it simply cannot tell you why it teaches whatever it teaches! And the only response that it is able to offer its proponents when they fail to live up to its standards of morality (and man can always only fail whatever standard it sets for himself – it does not matter how low he sets the bar), is… “try again!”

OK, but what if I fail? “Try harder!” But what if I still fail? “Try even harder!” is the only remedy that Buddhism (and in fact, every worldview apart from Biblical theism) is able to offer its adherents! And of course, then there is the consequent guilt of failure which all other worldviews still have to deal with.

The bottom line
The Gospel of Jesus Christ on the other hand recognises that man is just not able to measure up to any standard of ‘good’ that he is able to set for himself, and certainly not up to God’s perfect standard of ‘good’! He cannot just pull himself up by his bootstraps and ‘save his life’.

For that he needs none other than God Himself to reach out and rescue him from his desperate condition! “Salvation is found in no one else, for there is no other name under Heaven given to men by which we must be saved.” Acts 4:12

The bottom line is this: man is born into sin and lives in rebellion against God. Mankind has tried everything to avoid submitting to God, through Christ, and as such, will try find any excuse not to believe and follow. No matter how people may try to discredit the Word of God, and the person of Jesus Christ with outrageous theories, they will fail – because Jesus Christ is God, and the God of the Bible is the only living God who reigns forever.