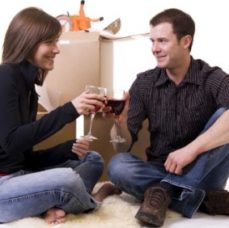 The Living Together Lie

25 years ago morality was a known, even if some chose to ignore it.  Today, don’t presume anything!  Many really don’t know, and few care. A minister friend of mine had concluded his ministry as a guest speaker in a church when a young couple asked to talk to him privately.  Drawing them to one side, they stumbled over their words:  “We thought you may have meant?….Umm.  Did you actually imply?…Umm.  Does the Bible really say it is wrong to live together before marriage?”  They stood quietly as colour began to discernibly drain from their faces.

Gently my friend showed them God’s counsel in His Word as he realised that they knew no better.  I can just about hear the outrage now:  That would never happen in my church!  But, it did and it does!  Let’s not get defensive; let’s provide a better answer for many of today’s new converts. The couple in question had wandered into the church together a few weeks earlier, not knowing anyone there.  They were searching for God.  That first night they both committed their lives to Christ.  From that point onwards, they were on fire for God.  They arrived in the same car, left in the same car and lived in the same house.  Only using their first names everybody presumed they were married. Fortunately for the couple, they could settle the issue.  After finding out what God’s Word said, they separated for the few weeks prior to their local minister solemnising their marriage.

Keep The Standard High
Without being sanctimonious we can keep the standard high for moral purity in a perverse world.  Though we, the Church, have always stated that it is God’s best for a couple to wait for marriage before cohabitation, it has been more a statement of conviction (although rightly based on the Word of God), rather than justifiable facts.  We, as ministers, may know that the Bible and a dynamic Holy Ghost filled life has the answers.  But, believe me, the world doesn’t and doesn’t even care to know.  They are no longer brought up on the Bible’s standards.  Presume nothing!

We want to encourage our young people to make intelligent decisions about entering into marriage.  Mostly cohabitation produces what is termed ‘Relationship Inertia’.  The central idea of ‘Relationship Inertia’ is that some couples, who otherwise would not have married, end up married partly because they cohabit. ‘Well, we may as well live together to save on expenses’, or some other meaningless reason. This leads to ‘We may as well marry’.  They ‘slide’ into decisions rather than positively making them.  Therefore it is easier to ‘slide’ out of them.  Research shows they tend to ‘slide’ into marriage (a negative approach or at best inertia), rather than ‘decide’ (a positive deliberate decision) to marry implemented by non-cohabiting individuals.  Again research then shows that the cohabitation couples who ‘slide’ into marriage separate and divorce more readily, as they have not made as conscious a decision to marry in the first place.

Because of our work in Marriage and Family areas, we keep abreast of the latest research and facts.  Progressively more is coming to light to validate our Christian position and stand.  We have listed below the findings of some of the latest research on the ill-effects of cohabitation outside of marriage.  Trust they will be helpful for you in gently and wisely helping couples who are coming direct from the world into our churches.

Key Facts on Cohabitation Before Marriage
·         By 2000 well over half of all first marriages are preceded by cohabitation [Uni. Wisconsin doc.]  Now it is 76% [ABS].

Cohabitation doesn’t reduce the likelihood of divorce; in fact it leads to a higher divorce rate.  One study showed it has a 46% higher risk than the normal divorce rate [1992 Journal of Marriage and the Family].
No positive contribution of cohabitation to marriage has ever been found, not even sexual compatibility as usually suggested [1993 Journal of Marriage and the Family].
Cohabitants tend not to be as committed as married couples, or prepared to work on their differences [1995 Journal of Family Issues].  Generally it is unusual for cohabitation to last more than five years.
Particularly problematic is the area of serial cohabitation.  It generates a greater willingness to dissolve later relationships [1993 Journal of Family Issues].
About 60% of cohabitation end in marriage [1989 National Study on Cohabitation].
In general cohabiting relationships tend to be less satisfactory than married relationships, with cohabiting couples reporting lower levels of happiness, lower levels of sexual exclusivity and sexual satisfaction and poorer relationships with parents [Bumpass, Sweet & Cherlin’s 1991 study].
Cohabitation has been consistently associated with poorer marital communications, lower marital satisfaction, higher levels of domestic violence and a greater probability of divorce [Uni. Of Denver, Ct. for Marital/Family Studies].
After five years only 10% of cohabiting couples are together.  They do not tend to permanency [Bumpass, Sweet’s 1989 study].
Married couples have substantial benefits over the unmarried cohabiters in terms of labour force productivity, physical and mental health, general happiness and longevity [1994 American Journal of Sociology].
Annual rates of depression among cohabiting couples are more than three times the married rate [1990 Psychiatric Disorders in Australia].
Physical and sexual abuse of female is much higher.  One study showed at least twice as high; another study nearly three times [1991 Journal of Marriage and the Family].
Abuse 20 times higher for children with cohabiting, biological parents, but 33 times greater if parent cohabiting with non-parenting male partner [1993 Family Education Trust: London].
1996 poverty rate was 6% with married parents, but 31% with cohabiting parents [1996 Journal of Marriage and the Family].
Cohabiters have on average lower incomes and less education [1999 Social Forces].
Australian National University found unmarried people need an income of $70,000 to display the same happiness as married persons with income of only $20,000 [Readers Digest May 1993].
One of the annoying features is that there is growing evidence that tax reforms make it beneficial to stay single.  This has been blamed for falling numbers of weddings [Daily Telegraphy, July 7th, 2007].
Many cohabiting couples waste their young adulthood in relationships going nowhere [Weston, Qu: Aust. Institute of Family Studies].  It may contribute to later pregnancies than personally wanted and research has shown cohabitating relationships are becoming more unstable and less likely to lead to marriage [Melbourne Herald Sun Nov. 22, 2007].

Ivan Herald
Ivan & Pauline Herald head up OzFAME (Australian Family And Marriage Education).  They have the largest Marriage Seminar in Australia in either the Secular or Christian realm.  It is officially ratified by the Australian Federal Government.  They travel regularly throughout New Zealand and can be contacted, for inquiry or inclusion into their schedule, at/through:    ozfame@bigpond.com
www.ozfame.com