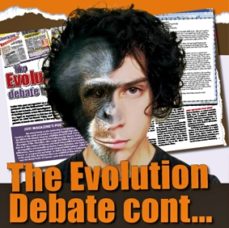 The Evolution Debate Continued…
Earlier this year we reported on a joint-venture between the South African Education Department and the Netherlands’ Government to plough R 160m into the teaching of evolution in our schools. JOY! investigated further to garner the opinion of several headmasters at leading schools across the country. It was not easy and many declined to comment – pity, as a topic as important as this has irreversible consequences on society. Nevertheless, we report on what we found. Enjoy, and remember that ultimately it is our responsibility as parents to teach our children in the way they must go (Proverbs 22:6).

It is imperative that when it comes to evolution, we have a Biblical worldview (ie: an opinion or perspective on a subject that is formed by an accurate understanding of the Bible’s teaching).
If we do not have a Biblical worldview on contemporary issues or ‘intellectual’ concepts, it will lead to one of three consequences:
• We will either disengage from society and become ostrich Christians who have no idea what is happening “out there” in the world;
• We will lose our faith or have it significantly damaged when others who are more learned or outspoken challenge us on contemporary issues and supposed inerrancy in Christian teaching; or
• We will have a fragmented Body of Christ at odds with itself because of many sincere Christians who walking around with saved hearts but “unsaved” (or unrenewed) minds. (Read Romans 12:2)

WE MUST BE INFORMED
You may be asking yourself, what does a Biblical worldview (or evolution for that matter) have to do with my faith? Well, actually everything!
The reason being that ‘the world’ is growing more militant in its attempts to disregard Biblical values and is constantly pushing the boundaries of morality (which we know comes from God, to mankind, for our own good).
If the devil finds an opportunity to deceive people, he will seek to destroy families. If he destroys families, he fragments society. If he fragments society, he enslaves nations. If he enslaves nations, he ruins generations. And it all starts with an idea. Which develops into a belief. Which in turn becomes a way of life. Which ultimately affects others.

WHY ARE THERE SPLIT VIEWS
That is why Christians, as carrier’s of God’s Truth, have to confront misguided thinking and breakdown liberal theologies. Ideas have consequences – so when one believes anything that is contrary to God’s Word, it will inevitably bring destruction.
Evolution is not simply a scientific theory, it the foundation of a belief system. It is also no coincidence that almost every atheist and/or secular humanist subscribes to evolution as a factual explanation for their origin. So, let us now examine this theory… To read the full article, buy the latest issue of JOY! Magazine.