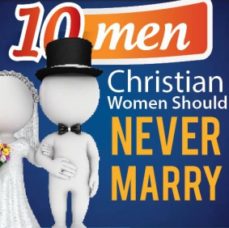 My wife and I raised four daughters – without shotguns in the house! – and three of them have already married. We love our sons-in-law, and it’s obvious God handpicked each of them to match our daughters’ temperaments and personality.

Today I have several single female friends who would very much like to find the right guy. Some tell me the pickings are slim at their church, so they have ventured into the world of online dating. Others have thrown up their hands in despair, wondering if there are any decent Christian guys left anywhere. They’ve begun to wonder if they should lower their standards in order to find a mate.

My advice stands: Don’t settle for less than God’s best. Too many Christian women today have ended up with an Ishmael because impatience pushed them into an unhappy marriage. Please take my fatherly advice: You are much better off single than with the wrong guy!

Speaking of “wrong guys,” here are the top ten men you should avoid when looking for a husband:

The unbeliever. Please write 2 Corinthians 6:14 on a post-it note and stick it on your computer at work. It says, “Do not be bound together with unbelievers; for what partnership have righteousness and lawlessness, or what fellowship has light with darkness?” This is not an outdated religious rule. It is the Word of God for you today. Don’t allow a man’s charm, looks or financial success (or his willingness to go to church with you) push you to compromise what you know is right. “Missionary dating” is never a wise strategy. If the guy is not a born-again Christian, scratch him off your list. He’s not right for you. I’ve yet to meet a Christian woman who didn’t regret marrying an unbeliever.
The liar. If you discover that the man you are dating has lied to you about his past or that he’s always covering his tracks to hide his secrets from you, run for the nearest exit. Marriage must be built on a foundation of trust. If he can’t be truthful, break up now before he bamboozles you with an even bigger deception.
The playboy. I wish I could say that if you meet a nice guy at church, you can assume he’s living in sexual purity. But that’s not the case today. I’ve heard horror stories about single guys who serve on the worship team on Sunday but act like Casanovas during the week. If you marry a guy who was sleeping around before your wedding, you can be sure he will be sleeping around after your wedding.
The deadbeat. There are many solid Christian men who experienced marital failure years ago. Since their divorce, they have experienced the Holy Spirit’s restoration, and now they want to remarry. Second marriages can be very happy. But if you find out that the man you are dating hasn’t been caring for his children from a previous marriage, you have just exposed a fatal flaw. Any man who will not pay for his past mistakes or support children from a previous marriage is not going to treat you responsibly.
The addict. Churchgoing men who have addictions to alcohol or drugs have learned to hide their problems – but you don’t want to wait until your honeymoon to find out that he’s a boozer. Never marry a man who refuses to get help for his addiction. Insist that he get professional help and walk away. And don’t get into a co-dependent relationship in which he claims he needs you to stay sober. You can’t fix him.
The bum. I have a female friend who realised after she married her boyfriend that he had no plans to find steady work. He had devised a great strategy: He stayed home all day and played video games while his professional wife worked and paid all the bills. The apostle Paul told the Thessalonians, “If anyone is not willing to work, then he is not to eat, either” 2 Thess 3:10. The same rule applies here: If a man is not willing to work, he doesn’t deserve to marry you.

The narcissist. I sincerely hope you can find a guy who is handsome. But be careful: If your boyfriend spends six hours a day at the gym and regularly posts close-ups of his biceps on Facebook, you have a problem. Do not fall for a self-absorbed guy. He might be cute, but a man who is infatuated with his appearance and his own needs will never be able to love you sacrificially, like Christ loves the Church (Eph 5:25). The man who is always looking at himself in the mirror will never notice you.
The abuser. Men with abusive tendencies can’t control their anger when it boils over. If the guy you are dating has a tendency to fly off the handle, either at you or others, don’t be tempted to rationalise his behaviour. He has a problem, and if you marry him you will have to navigate his minefield every day to avoid triggering another outburst. Angry men hurt women – verbally and sometimes physically. Find a man who is gentle.

The man-child. Call me old-fashioned, but I’m suspicious of a guy who still lives with his parents at age 35. If his mother is still doing his cooking, cleaning and ironing at that age, you can be sure he’s stuck in an emotional time warp. You are asking for trouble if you think you can be a wife to a guy who hasn’t grown up. Back away and, as a friend, encourage him to find a mentor who can help him mature.
The control freak. Some Christian guys today believe marriage is about male superiority. They may quote Scripture and sound super-spiritual, but behind the façade of husbandly authority is deep insecurity and pride that can morph into spiritual abuse. First Peter 3:7 commands husbands to treat their wives as equals. If the man you are dating talks down to you, makes demeaning comments about women or seems to squelch your spiritual gifts, back away now. He is on a power trip. Women who marry religious control freaks often end up in a nightmare of depression.

If you are a woman of God, don’t sell your spiritual birth right by marrying a guy who doesn’t deserve you. Your smartest decision in life is to wait for a man who is sold out to Jesus.

J. Lee Grady is the former editor of Charisma and the director of the Mordecai Project (themordecaiproject.org). You can follow him on Twitter at @leegrady. He is the author of 10 Lies Men Believe and other books.