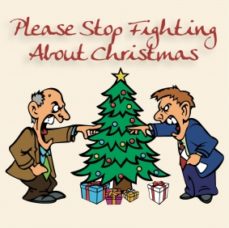 It’s bad enough that rabid secularists hate Christmas; it’s tragic that some Christian purists judge others for celebrating the holiday.

What the Christmas critics say:
When I wrote about how God worked in the lives of people in the Biblical Christmas story, several readers jumped in to remind me that the modern celebration of Christmas is a pagan holiday that is luring unsuspecting, gift-giving revellers to hell itself. One person ‘David’ wrote in an online forum that he “isn’t comfortable celebrating Christmas” because of its demonic origins.
You probably know there are many Christians who boycott Christmas for various reasons – some factual and some quite debatable. These people insist:
• The holiday has become too commercialised and promotes greed (I would agree)
• No one knows when Jesus was born (True – and the Bible is silent about the date. However, ‘David’ and other anti-Christmas purists insist Jesus was born on Sept 11 in 3 BC, during Rosh Hoshanna)
• The Dec 25 date was chosen to ‘Christianise’ the pagan celebration of Saturnalia, an ancient winter solstice festival (Maybe true – but is there anything wrong with Christianising something? I’m glad a pagan celebration was replaced!)
• Christmas trees are a pagan tradition, since Druids believed evergreen boughs were magical and had the power to scare away demons (‘Thursday’ is also named for the Norse god Thor, but that doesn’t mean I worship him when I use the word)
• Dec 25 is the birthday of Nimrod, who later became known as the pagan god Baal, who later became known as Nicolas, who later became known as Santa Clause. For this reason, we can be sure that demons lurk behind all wreaths, candles, ornaments, fruitcakes, sleighs or anyone dressed in red and green!

A time to celebrate Christ
In all fairness to these Christmas critics, I must admit I never led my children to believe in Father Christmas. This was not because I was afraid he was Baal, Nimrod or an ancient Turkish bishop in disguise, but because (1) I felt I would be lying to my kids if I told them Father Christmas brought them gifts; (2) I hate standing in lines at the shops; and (3) the prospect of inviting a strange man into my house so he can ‘check’ on my sleeping daughters is creepy. But I unashamedly love Christmas.
I love the trees, the ornaments, the lights, the smells, the foods, the music, the gifts and the family and friends who share the celebration with me. All the decorations point me to Jesus – from the bells on the front porch to the angel on top of the tree to the plastic manger scene. For me, Christmas is a wondrous time of year when I ponder the miracle of Christ’s birth and, hopefully, get lots of chances to share His generous love with people who are less fortunate than I am.

A battle continued over the ages
People have been fighting about Christmas for a long, long time. Christmas gift-giving was condemned by the Catholic Church during the Middle Ages because of the pagan origins of the holiday. Then, anti-Catholic Puritans declared war on Christmas in England and banned it from 1647 to 1660, calling it “a popish festival with no justification.” In America, Puritans outlawed Christmas in one state from 1659 to 1681, and it was an unpopular holiday after the Revolutionary War because Americans associated it with England.
Today, in spite of the fact that Christmas, for many people, has morphed into a meaningless mush of secularised cards, trees and year-end sales, the Scrooges of our day want to remove the remaining Christian spirituality out of it. I expect atheists to hate Christmas. I know they will try to ban nativity scenes from public spaces, or remove Christmas carols from stores. But it is downright tragic when Christians – who should welcome every opportunity to bring the miracle of Jesus’ incarnation into public life – start boycotting (or even demonising) the holiday. Keep Christmas in your own way, by all means. If it is offensive to you to hang decorations or to send a Christmas card to friends, then don’t.
I won’t judge you for that. But please don’t judge other believers simply because they want to celebrate all that is pure and decent and meaningful in this special time of year. P.S. – Merry Christmas! 