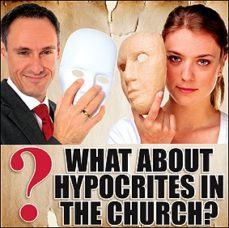 Skeptics Answered: What About Hypocrites in The Church?
“I would never become a Christian! Look at all the hypocrites in the Church! Look at all the scandals of tele-evangelists, the Health and Wealth preachers, the ‘Name it! Claim it! Frame it!’ Hyper-faith prosperity preachers, two-faced frauds and con men! I don’t want to be part of hypocrisy!”

Hypocrisy offends God
God is far more offended by hypocrisy than you are. The Bible contains the greatest condemnations of hypocrisy ever recorded. The Apostle Paul wrote about: “False apostles, deceitful workers, transforming themselves into apostles of Christ…For satan transforms himself into an angel of light, therefore it is no great thing if his ministers also transform themselves into ministers of righteousness…” 2 Cor 11:13-15.

Scripture condemns it
Paul also wrote of: “false brethren secretly brought in…” Gal 2:4. The Apostle Peter taught that we are to lay “aside all malice, all deceit, hypocrisy, envy and all evil speaking.” 1 Pet 2:1. The writer of Hebrews exhorts us to: “draw near with a true heart in full assurance of faith, having our hearts sprinkled from an evil conscience…” Heb 10:22.

God demands our honesty
Our Lord Jesus Christ exposed and condemned hypocrisy most famously in the Sermon on the Mount (Matt 6:1-6; 16-18; 7:1-5). Matthew 23 records our Lord’s devastating condemnation of hypocrisy: “All their works they do to be seen by men…woe to you…hypocrites! For you shut up the Kingdom of Heaven against men; for you neither go in yourselves, nor do you allow those who are entering to go in…hypocrites!

For you devour widow’s houses…hypocrites! You make him twice as much the son of hell as yourselves. Woe to you, blind guides… fools and blind!…Blind guides, who strain out a gnat and swallow a camel!…Full of extortion and self-indulgence…woe to you…hypocrites! For you are like white washed tombs which appear beautiful outwardly, but inside are full of dead men’s bones and all uncleanness.

Even so you also outwardly appear righteous to men, but inside you are full of hypocrisy and lawlessness…serpents, brood of vipers! How can you escape the condemnation of hell?” Matt 23:1-33.

God clearly demands honesty and sincerity. Our yes must be Yes, and our no, No! Hypocrisy is consistently condemned throughout Scripture.

Hypocrites are found everywhere
There are of course hypocrites and charlatans in the medical profession too, who violate their Hippocratic Oath to never give an abortifacient to a pregnant woman, nor to do anything to harm a patient. There are innumerable scandals of organ harvesting from prisoners in China to provide kidneys, livers and hearts for transplants to patients willing to pay enough. Doctors who kill babies through abortion and elderly people through euthanasia. However, none of us would allow the presence of tens-of-thousands of hypocrites in the medical profession to stop us from going to trusted doctors and dentists when we are ill.

There are many counterfeit banknotes, but that doesn’t stop any of us from using genuine notes. We have heard the reports of hamburgers contaminated with, amongst other things, the ecoli virus, but people still eat burgers.

Typically, hypocrisy in the Church is used as an excuse for not repenting of our sins or surrendering our lives to Christ. By pointing out the sins of others, we try to justify our own sins.

Sinners are in church too
It needs to be noted out that not everyone who attends church services is a true Christian. Many have no saving knowledge of Christ. The true Church of Christ consists of born-again believers regenerated by God’s Holy Spirit. By definition a Christian has to admit that he is a sinner and is not good enough for Heaven. By virtue of being a Christian one has to acknowledge one’s sinfulness and depravity. That one deserves the wrath of God in hell. The Christian Church requires a public acknowledgement of sin as a condition for membership. The very ordinances of the Church make this clear. Baptism is for the forgiveness of sins, symbolising burial and resurrection. The Lord’s Supper reinforces this, emphasising that we are sinners needing God’s mercy and salvation by blood Atonement. The Lord’s Prayer includes the petition to forgive us our sins. The Apostles Creed includes the forgiveness of sins. The regular reading of the Ten Commandments in our churches reminds us of God’s standards and how we have failed.

The grace of God
The Church has never claimed to be a fellowship of perfect people. That would be hypocritical. The Church is a fellowship of sinners who acknowledge their complete dependence upon the mercy of Almighty God to forgive and transform them.

That is what grace means – God’s undeserved favour. The Apostle Paul claimed: “I am the worst of sinners.” Authentic Christians claim to be so bad that they deserved to be sentenced to hell forever. John Newton’s popular hymn begins: “Amazing Grace, how sweet the sound that saved a wretch like me.” Christians acknowledge they are imperfect – hence why they need a perfect Saviour. The Gospel we preach is perfect, and mankind will stand before a perfect Judge.

Acknowledging we are sick
It may be a good thing that there are hypocrites in the Church – they may hear the Gospel, repent of their hypocrisy and be saved. We don’t criticise hospitals for being full of sick people. That is exactly what hospitals are built for!

If you allow a hypocrite to come between you and God, then the hypocrite is closer to God than you are! If you boycott church because you hate hypocrisy, then you could end up spending all eternity with all the hypocrites in hell.

Observing hypocrisy in the world
There is a lot of hypocrisy in this world. Islam claims to be a peaceful and tolerant religion, while many of its members declare Jihad, issue death threats, murder and mutilate vast amounts of people in the name of their religion. Newspapers claim to stand for freedom of speech while censoring pro-life obituaries. Communists condemn oppression and uphold themselves as ‘liberators’ and ‘champions of justice’ while communist regimes have been the most oppressive in all of history. No other regimes have imprisoned as many people, executed as many victims, deliberately starved so many millions, erected such huge institutions of oppression, employed more secret police, imprisoning whole nations behind an Iron Curtain of barbed wire, mine fields, electric fencing and machine gun towers. Just in the 20th Century over 160 million people were killed by communist governments, even while they claimed to be devoted to ‘World Peace’!

Bizarre hypocrisy
The African Union continually talks about democracy and human rights whilst the vast majority of government leaders represented at the AU are dictators. Many in our own country condemn racism while consistently supporting an extremely racist regime, Robert Mugabe’s ZANU-PF in Zimbabwe. Humanists claim to stand for ‘tolerance’, yet are thoroughly intolerant of Evangelical Christians.

Humanists champion ‘diversity’ and ‘pluralism’ and yet they work steadfastly to exclude Christian views from the public sphere. Teachers who believe in the sanctity of marriage are expected to go against their own conscience to teach their students ‘Situation Ethics’ and perverse ‘Alternative Lifestyles’. Evolutionists who claim to be for ‘freedom of speech’ regularly ban any dissension, or discussion, and fire those scientists who question Darwinian Evolutionism, or who seem to consider Intelligent Design. The fact is humanism is the most destructive religion of all time, and the most intolerant.

Return to God
Even amidst the original twelve Disciples of Christ, there was Judas – the ultimate hypocrite and traitor. Yet that has not stopped millions of Christians, throughout the ages, from finding grace and peace at the foot of the Cross.

If you have been let down or betrayed, by a professing Christian, do not let that come between you and God. Jesus Christ is the Way, the Truth and the Life. No one comes to the Father except through Him. (John 14:6).

Many people despise and reject what they think is Christianity when they are merely rejecting the hypocritical churchianity that our Lord Jesus Christ Himself rejected and condemned. Do not let the counterfeit and the false keep you away from the genuine and the real.