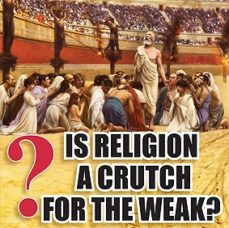 Skeptics Answered: Is Religion a Crutch for the Weak?
Humanist and atheist, Bertrand Russell, wrote in his book ‘Why I am Not a Christian’ that: “Man is the product of…accidental connections of atoms…no fire, no heroism, no intensity of thoughts and feeling can preserve an individual life beyond the grave…The whole temple of man’s achievement must inevitably be buried beneath the debris of a universe in ruin…Only within the scaffolding of these truths, only on the firm foundation of unyielding despair can the souls’ habitation henceforth be safely built.”

Christianity is borne from adversity
Russell believed that man is an accident of the cosmos, formed by chance and chaos, directionless in life, and in the end, nothing but food for worms. Russell maintained that religion is simply a crutch for weak people, who cannot bear to face up to reality.

Some religions may be a crutch. Certainly atheism is a crutch. However Christianity is no crutch and many Christians throughout history could hardly be classified as weaklings.

In some of the worst of circumstances, Christianity has produced the greatest courage, the greatest achievements, progress, prosperity and freedoms ever known.

The courage of Polycarp
When Polycarp, the Bishop of Smyrna, was arrested and brought before the Roman consul, he was told…“Do this, old man, just curse Christ, and I will set you free.”

Polycarp responded: “86 years I have served my Christ, and He has never done me any wrong. How then can I blaspheme my King who has saved me?” “I have wild beasts” threatened the pro-consul. “Bring them” Polycarp replied. “If you despise the wild beasts I will have you burned,” warned the consul.

“You threaten me with a fire that burns for but an hour, and then is extinguished. But you know nothing of the fire of eternal judgement which will never be extinguished. Bring what you will.”

As Polycarp was led into the arena he was heard to pray: “Lord God, Father of our Blessed Saviour, I thank Thee that I have been deemed worthy to…die for Thee and Thy cause.”

When the governor ordered Perpetua to worship the emperor, her response was decisive: “I will not!”

“Are you a Christian then?” “Yes I am!” Perpetua’s determined response brought immediate condemnation. She was condemned to be thrown to the wild beasts and to die in the arena. Perpetua and her fellow Christians entered the stadium singing psalms in such a joyful demeanour, that the crowd demanded that they be scourged first. This was done.

Testimonies of courage
As the mob screamed abuse, Perpetua was heard to say clearly: “You have condemned us, but God will condemn you.” Perpetua encouraged the other Christians: “You must all standfast in the faith and not be weakened by what we have gone through.”

Witnesses in the stands described Perpetua in the arena as “young and beautiful”, “a pure and modest Christian lady”, “with shining countenance and calm step, as the beloved of God,  putting down everyone’s stare by her own intense gaze.”

Her example of Christian resolve and courage, choosing to suffer and die with a clear conscience rather than deny her Saviour, inspired generations of Roman Christians to stand firm in the face of relentless persecution. In time even the emperor was converted to Christianity.

Similarly, Lady Jane Grey refused to forsake her faith and was beheaded by her cousin ‘Bloody Mary’. None of these Christians could have been classified as weaklings. Their faith was hardly any crutch to avoid reality!

One can hardly accuse people like Dr David Livingstone (who courageously pioneered missions, walking across the continent of Africa, confronting slave traders and setting captives free) of being “a weakling”, nor can one suggest that his faith was “a crutch”!

Who is really escaping reality?
However, it is in fact the atheists who are seeking to escape from reality. Atheism is actually a crutch for the immoral. Bertrand Russell lived an absolutely outrageously immoral life. His scandalous immorality and serial adulteries make it quite clear that he chose to create an alternate ‘reality’ in order to stifle his conscience.

The great philosopher Emmanuel Kant observed: life without an afterlife would be like a marathon race with no finish line. Without eternity, life would be an absurd and meaningless joke.

Atheism is a crutch
Swearing is the crutch of conversational cripples. Immorality is the crutch of spiritual cripples. Atheism is the crutch developed by those who seek an alternative reality to avoid the hard facts of Creation, the depravity of man, the Holiness of God, the immortality of the soul, the demands of God’s Law, the Day of Judgement and the fact that we are accountable to a just and Holy Creator. We have a sin problem and there are serious consequences to sin. “For the wages of sin is death.” Rom 6:23. When many people clamour for the freedom to do whatever they want, with whoever they want, whenever they want, and wherever they want, the result is moral chaos. Although they claim to be free, in reality those who indulge the sinful nature are slaves to sin. Sin is actually the root cause of much skepticism. It is the crutch of sinners.

The sinful nature is a crutch
Julian Huxley, known as Darwin’s bulldog, the one who made Darwinian evolutionism famous, was interviewed on television. He was asked why evolution was accepted so quickly. His answer: “The reason why we accepted Darwinism, even without proof, is because we didn’t want God to interfere with our sexual mores.”

Here is an uncharacteristically honest answer from a leading evolutionist. Huxley never mentioned anything resembling scientific evidence, but merely that the idea of God interfered with sinful choices! Either the Bible will keep you from sin, or sin will keep you from the Bible.

Throw away your crutch
Reject the rotten crutch of evolutionism and atheism. Face the facts of the real world. A strong Gospel makes a strong people. The Reformation produced generations of courageous and principled people who changed history. Strong doctrine puts backbone into us. The Reformation faith gives backbones of steel and Puritan devotion inspires fire in our souls.

Take up the Cross
Reject the rotten crutch of atheism and evolutionary make-believe. Face the facts of the real world. God is Holy, man is depraved. There is a Day of Judgement and we all have an appointment with Almighty God. Each one of us will have to give an account for everything we do in this life. What you sow is what you will reap.

Throw away the crooked crutch of the world and take up your Cross. Deny yourself, forsake worldliness. Don’t follow the crowd on the broad way. Turn away from what is popular and easy. Choose the steep high road of the Will of God. Take up the sword of the Spirit and fight the good fight of Faith.

“Do not fear those who kill the body but cannot kill the soul. But rather fear Him who is able to destroy both soul and body in hell.” Matt 10:28