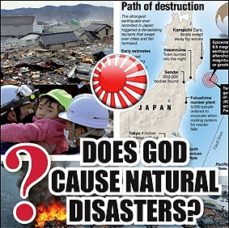 Skeptics Answered: Does God Cause Natural Disasters?
The earthquake and tsunami in Japan has sparked numerous articles and programmes alternately blaming God for the disasters, or claiming that these disasters prove that God does not exist. One newspaper article claimed that all the heads of the major religions and denominations which they interviewed agreed that the earthquake and tsunami could not have been a judgement from God.

Are people basically good?
It would seem that these theologians and religious authorities share a basic assumption: that man is basically good. Because we are all, at heart, such good people, we could never be judged by a loving and merciful God. In the book of Amos 4:7-8 the Lord declares: “I also withheld rain from you when My harvest was still three months away. I sent rain on one town, but withheld it from another…yet you have not returned to Me, declares the Lord.”

What the Word says
Far from people being basically good, the Scriptures teach the innate depravity of man: “There is none righteous, no, not one; there is none who understands; there is none who seeks after God. They have all turned aside; they have together become unprofitable; there is none who does good, no, not one. Their throat is an open tomb; with their tongues they have practiced deceit; the poison of vipers is under their lips; whose mouth is full of cursing and bitterness. Their feet are swift to shed blood; destruction and misery are in their ways; and the way of peace they have not known. There is no fear of God before their eyes.” Rom 3:10-18

“But know this, that in the last days perilous times will come: For men will be lovers of themselves, lovers of money, boasters, proud, blasphemers, disobedient to parents, unthankful, unholy, unloving, unforgiving, slanderers, without self-control, brutal, despisers of good, traitors, headstrong, haughty, lovers of pleasure rather than lovers of God, having a form of godliness but denying its power.” 2 Tim 3:1-5. (See also 1 Cor 6:9-11 and Rev 21:8).

Jesus on disasters
In the light of these passages and the blessings of obedience and the curses of disobedience outlined in Deuteronomy 28, it would appear that the message of these natural disasters is being rejected by most journalists and theologians. It is a double grief when lives are lost and lessons are not learned. Every deadly calamity is a merciful call from our Holy God for us to repent. That was how the Lord Jesus responded to those who brought news to Him of the Galileans who had been massacred by Pontius Pilate in the Temple. Jesus answered: “Do you suppose that these Galileans were worse sinners than all other Galileans, because they suffered such things? I tell you, no; but unless you repent you will all likewise perish.” Luke 13:2,3

Then the Lord referred to the disastrous fall of the tower in Siloam when 18 died. “But unless you repent you will all likewise perish.” Luke 13:5

There is a time to weep and repent
There is a time to weep (Eccl 3:4), and we should grieve with those who grieve. But we should also repent: “Now, therefore,” says the Lord, turn to Me with all your heart, with fasting, with weeping, and with mourning. So rend your heart…return to the Lord your God, for He is gracious and merciful, slow to anger, and of great kindness; and He relents from doing harm.” Joel 2:12-13. The lesson we should learn from every deadly disaster is to repent.

Recognising reality
We grieve with and pray for those affected by natural disasters. But let us also grieve that God is cursed for every catastrophe, but seldom praised for His wonderful Creation.

Lament that God makes the news headlines only when man mocks His power or questions His goodness, but tens-of-thousands of God’s acts of mercy, grace, protection, provision and patience receive no headlines.

Grieve that the Name of the only righteous Man who ever walked the earth is blasphemed in cinemas and across the world.

Grieve that God is cursed by the very same people who question why God does not restrain the consequences of their own rebellious actions.

What could God be saying?
Could God be speaking to Japan? Over 70% of Japanese claim no personal religion, but the majority follow the demands of idolatrous and ancestor venerating Buddhism and rituals of polytheistic Shintoism. Many also follow some of the hundreds of newer religious movements that are offshoots, or interpretations, of these.

The moral climate in Japan
Japan’s own leaders have called their nation a “superpower without a moral compass.” Japan is a culture with no apparent direction; the nation has been described as having ‘a suicide epidemic’ with over

30 000 suicides a year. Immorality is rife with rampant teenage prostitution. Japan has one of the world’s lowest birth rates and highest life expectancies. Only 10% believe in the existence of a personal God. Cults and sects have grown far faster in Japan than Evangelical churches. There is a great lack of men in the churches, with seven women to every man in church.

The Church in Japan tends to have an insular, bunker mentality and generally fails to engage with society. Church attendance is low with less than half of church members regularly attending services. There is a tremendous need for spiritual Revival and Biblical Reformation in the churches in Japan and for dynamic widespread evangelism to fulfil the Great Commission.

The judgements of God
In the wake of the catastrophic earthquake and tsunami in Japan, we need to study afresh the Holiness and Justice of God and God’s Word to a nation. “I sent plagues among you…I killed your young men with the sword…yet you have not returned to Me, declares the Lord.” Amos 4:10

“You are Just in these Judgements, You who are and who were the Holy One, because You have so judged; for they have shed the blood of Your saints and prophets…yes, Lord God Almighty, true and just are Your Judgements…they cursed the Name of God, but they refused to repent and glorify Him…and there were noises and thunderings and lightening, and there was a great earthquake, such a mighty and great earthquake…and they cursed God.” Rev 16:1-21

Does God speak through disasters?
Can God be speaking to a lost and careless world through these deadly disasters? Can these catastrophic calamities be a merciful call from a just God for us to repent? In 2 Chronicles 7:12-14 the Lord declares: “When I shut up the Heavens so that there is no rain, if My people were called by My Name, will humble themselves and pray and seek My face and turn from their wicked ways, then will I hear from Heaven and will forgive their sin and will heal their land.”  Throughout the Bible natural disasters are seen as a judgement of God and a warning to people to humble themselves, pray, seek God’s face and turn from their wicked ways.

Please pray for their salvation
It is time for us to take a fresh look at God’s Law and to structure our repentance according to the Ten Commandments. Biblical repentance is not merely ‘feeling sorry’ for our ‘failings and weaknesses’. What God calls wicked we should not try to redefine as some kind of ‘mistake’. Biblical repentance involves: conviction, contrition and conversion. A change of mind, a change of heart and a change of life. “Seek the Lord while He may be found; call on Him while He is near. Let the wicked man forsake his way and the evil man his thoughts. Let him return to the Lord, and He will have mercy on him, and to our God for He will freely pardon.” Is 55:6-7

Please pray for the people of Japan and those in other countries affected by disaster. Pray and support the work of missionaries in these lands, to spread the Gospel. Every deadly disaster is a merciful call from our Holy God for us to repent.