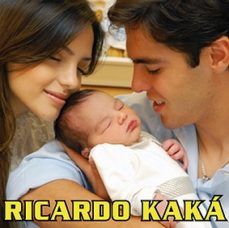 Ricardo Kaká: Belongs To Jesus
Despite his team bowing out of the 2010 FIFA Soccer World Cup, Ricardo Kaká will always remain a hero of JOY! Magazine. Not only is this talented player a shining example for Christ on and off the field, but he has literally put his money where his mouth is by sponsoring the production of thousands of evangelistic DVD’s documenting his testimony. And though the soccer will come and go, the bold stand that Kaká is making for Jesus continues to be a hallmark of this exciting striker’s career.

A little boy with a dream
Born in Brazil, Ricardo Izecson dos Santos Leite was known as Ricardinho (which means little Richard) for the earliest years of his life. But when his youngest brother could not pronounce this and ended up calling him Kaká, the nickname stuck. The son of a civil engineer and a teacher, Kaká grew up in a happy, faith-filled home. (Both his parents are Evangelical Christians).

With an aptitude for both academics and sport, Kaká started his schooling career at a Baptist primary and though a shy child, held the hopes of becoming a professional tennis player (though his teachers figured he would make a good doctor).

Soccer, school and self-discipline
Spotted at age eight by a P.E. teacher who suggested his father enrol him in a soccer academy, Kaká demonstrated excellent ball skills and a desire to play professional sport.  Almost every young boy in Brazil dreams of becoming a soccer player one day and many fathers give footballs to their sons whilst still in their baby cribs! Children are often seen playing soccer in the streets and on the beaches, and Kaká was no different.

It was at age 12 though, that Kaká had a profound experience that would pave the way for his future in Christ and his career in soccer. It was at this tender age that Kaká (who had been following the Christian faith from a young age) decided to be baptised and publicly commit his life to Jesus. Though most Brazilians are Catholic, Kaká and his family attended a Protestant church and still do to this day.

Fully committed to Christ
“When I was baptised in 1994, something supernatural happened to me. I cannot explain it, but after that experience I grew closer to God and began to know Him in a more in-depth way. My life changed and was never the same again.”

Kaká also became serious about his football…but his small size kept him from standing out. He lagged behind his contemporaries in growth, but was determined to try harder. Kaká had to work twice as hard and was often on the bench, but he doesn’t regret those early years: “It was hard, but I learnt to fight for what I wanted.”

A teenager with stars in his eyes
At the football academy Kaká balanced his school work and soccer and was very self-disciplined in managing the expectations. He was involved in a Bible Study and Athletes for Christ and a bold witness to his friends and family. He gained a love for the Word at a young age and earned the respect of his teammates for standing firm to his beliefs.

Still a ‘young’ boy, Kaká often played soccer on playstation and dreamed of representing A.C. Milan one day (which he later did). He signed his first professional contract at age 15 and was immediately put on an eating plan to bulk up – as Kaká was still smaller and skinnier than the other boys his age. He also reverted to wearing contact lenses as his myopia worsened, and later had lasik eye surgery to correct his near-sightedness.

A devestating accident
Things weren’t all smooth sailing though and at 18, Kaká’s career almost ended when he snapped his neck. It was while messing around on a waterslide that he slipped and fell headfirst into the pool, hitting his head and damaging his sixth vertebrae. He was rushed to hospital immediately and doctor’s were amazed that the soccer prodigy could still walk – as he should have been paralysed. The family were grateful to God for sparing their son’s life, but knew that healing still had to take place in order for him to ever play soccer again.

Friends and family were urged to pray for his complete healing and though Kaká had to wear a neck brace and lie in bed for two months, he walked away from the experience completely healed and closer to Jesus.

God’s purposes and plans
He says: “I knew His hand had saved me and that God was in control of my life”. The accident was a dramatic pause in Kaká’s life and once again he saw how “God works all things for the good of those who love Him and are called according to His purpose” Rom 8:28.

Spiritually it confirmed Kaká’s faith and caused him to pray more and trust God.  Kaká asserts that despite what some may call a negative circumstance, “I believe God had a purpose in that accident”. The recovery also gave him time to think and set goals for his soccer career.

Soon things changed for the better and Kaká became the superstar of his local professional football club. The media took note of the young star, and even in those early stages he gave all glory to God. It was in a hotly contested tournament in 2001 between Rio and São Paulo (in front of 71 000 fans) that Kaká gained  instant nationwide fame. In the last two minutes of the game Kaká scored two goals, clinching the trophy for his team (who had never won before). Just after his dramatic winning goal, Kaká (18 at the time) raised his hands Heavenward and praised God for the victory.

Instant fame for a young man
Overnight everyone knew who Kaká was and he couldn’t go anywhere unnoticed. The humble star was taken by surprise with the media frenzy – within a few months of rising to fame, Kaká appeared on magazine covers, received bags of fan mail and had hordes of screaming girls following his every move. Whereas previously he had asked the media to spell his name correctly (they spelt it Cacá), he now had no problems being respected and seeing his name rightfully lettered as it adorned newspaper headlines and fan’s merchandise.

A platform for the Gospel
Kaká believes the fame is a platform to share God and has never allowed himself to become arrogant (which is quite a feat considering that soccer is almost like a religion in Brazil and its players are hero-worshipped).

Following his superstardom, Kaká was soon compared to legendary Brazillian players such as Pelé and had women clamouring for his attention. Yet, he remained focussed on the game and refused to get involved in a relationship until it was God’s timing. In 2002 he was elected to play for the Brazil national team in the FIFA World Cup. Though he was not a huge feature on the team, the event was a defining moment for Kaká as Brazil went on to win the trophy that year.

Meeting his future wife
The team, made up of many Christians all stripped to their under- shirts after the final whistle blew, to reveal slogans like: ”I belong to Jesus” and “God is faithful”. Kaká was branded for Christ on an international stage and became known to fans around the world as an outspoken, even tempered, smiling and calm Christian. 2002 was not only his year of national glory, as Kaká met his future wife, Caroline Celico through family firends.  They exchanged numbers and though she was 15 and was 19, the two fell in love. Kaká took Caroline to church and shared his faith with her. It was only after she gave her life to Christ that Kaká seriously considered a marriage (which later took place in 2005 after Kakáproposed to her in Venice). The two have been happily married for five years and have a boy, Luca. Caroline is a Gospel singer and happily acknowledges that her husband belongs to Jesus first and foremost.  The young couple are celebrities in their native country – not only for their good deeds and gorgeous looks – but also because they married as virgins.

Faith, family, football – in that order!
Kaká has received high accolades from football experts and has even been credited as a FIFA Football Player of the Year in 2007. Yet his heart is not for fame and fortune (he famously turned down exhorbitant club offers in Europe to stay with A.C. Milan, his resident team, though he now plays for Real Madrid). Instead his heart is to see the masses saved and to alleviate poverty and hunger. (Kaká works with the U.N. and donates much of his earnings to his church). And after he retires from football? Well Kaká intends studying theology and becoming a pastor. Regardless of where his career takes him, Kaká’s character and personal life set him apart as a true champion. The 28 year old has consistently kept his priorities in check – faith, family, football – and he continues to shine for Jesus.