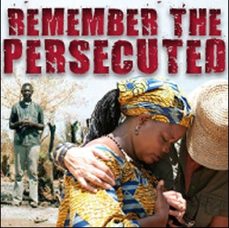 Remember the Persecuted
Over 400 million Christians live under 66 governments who restrict religious freedom and persecute believers. Every year an average of 200 000 Christians are killed for their Faith.

Faithful under fire
“In this you greatly rejoice, though now for a little while, if need be, you have been grieved by various trials, that the genuineness of your Faith, being much more precious than gold that perishes, though it is tested by fire, may be found to praise, honour and glory at the Revelation of Jesus Christ.” 1 Pet 1:6-7

“Yes, and all who desire to live Godly in Christ Jesus will suffer persecution.” 2 Tim 3:12. If we are seeking to be faithful to our Lord Jesus, we will suffer some persecution for it. By God’s grace, perhaps not the violent and vicious persecution which Christians in communist and Muslim lands have suffered. However, if we remain faithful to the Lord, there will be times when we will be misunderstood, slandered, discriminated against, threatened and abused.

Whether from family or friends, neighbours or co-workers, whether at school or at the work place, those who maintain a consistent testimony for the Lord are bound to suffer some abuse. When the Lord warned His disciples of coming persecution, they responded with disbelief. Because they did not believe Christ’s warning, they did not “watch and pray.” As a result, they denied the Lord and ran away.

The Apostle Paul strengthened the disciples and encouraged them to remain true to the Faith by teaching: “We must through many tribulations enter the Kingdom of God.” Acts 14:22

Rooted in the Word
Jesus taught that many believers would forsake Him (Matt 24:9-10) when trouble or persecution comes because of their superficial commitment. Those with no roots in God’s Word would fall away quickly (Matt 13:21). In response to the clear warnings of these Scriptures, and in the light of the increasing hostility towards Christianity in so many circles, it would be wise for every Christian to study what the Word of God has to say about persecution.

Our Lord Jesus Christ taught that we should not be afraid of those who can only kill the body and after that can do no more. The Lord told us whom we should fear. We must fear God, who after the killing of the body has power to throw both body and soul into hell, forever (Luke 12:4-5).

Refusing to worship Caesar
‘Foxes Book of Martyrs’ records many testimonies of courageous Christians who suffered for the Faith. It is interesting to note that Christians were not persecuted in the Roman Empire for worshipping Jesus. The Romans were polytheists. They had an entire pantheon of gods. If the early Christians had burnt incense before an image of Caesar, they would have been left alone. However, by refusing to participate in Emperor worship and declare “Caesar is lord”, Christians came under suspicion and violent persecution. They were not persecuted because they worshipped Christ, but because they refused to revere Caesar.

Condemning a nation
At one point in the 16th Century, the Spanish Inquisition condemned the entire nation of Holland (3 million men, women and children) to death as heretics! By God’s grace, and through the courage of Prince William the Silent and his followers, the Dutch succeeded in throwing back the Spanish invaders and winning freedom for Protestant Holland.

More Christians died for Christ in the 20th Century than in all previous 19 centuries combined. The Christian World Encyclopaedia calculated that at least 28 million Christians had been martyred in the 20th Century. During the last 30 years of missionary work I have had the privilege of serving the persecuted Church in Mozambique, Angola, Romania, Albania, Rwanda, Sudan, Northern Nigeria, the Congo and Zimbabwe. During this time we have endured aerial bombardments, ambushes, artillery and rocket barrages, and been arrested and imprisoned for missionary work.

Mocking the Gospel
On numerous occasions, Cuban soldiers in Angola have placed the heads of cattle, or an AK47, on altars, or pulpits, demanding that the Christians commit idolatry and bow before them. They have walked into services, and taken the Bible off the pulpit and thrown it by the door and demanded: “You may all leave – one by one – just spit on the Bible and you can go free. If you don’t – we will kill you!”

Communist troops have burst into church services declaring: “You Christians – you say that you worship the Lamb – well here is a lamb!”  The Cubans taunted the worshippers as they started pouring the blood of this lamb over the believers saying “the blood of the lamb is shed amongst you – worship the lamb!”

The head of the lamb was placed mockingly on the pulpit and people were dragged and forced to their knees to bow down before it. Christians who have escaped from communist concentration camps and prisons have told how they were often tortured by the Marxists.  One prisoner told me of a time in Angola when they were near breaking point and one of them shouted out: “Why don’t you just kill us, and get it over with?” The response of the communist concentration camp guards was enlightening: “Oh no, we don’t want to send you to Heaven to be with God! No, we want you to curse Christ and to come to hell with us, for all eternity!”

If the devil cannot stop us being converted, he at least wants to divert us and distract us so that we are not effective in winning others to Christ.

As long as you refuse to be intimidated into silence, neutrality and compromise, persecution fails. “Then Jesus said to His disciples, ‘if anyone desires to come after Me, let him deny himself, and take up his cross, and follow Me. For whoever desires to save his life will lose it, but whoever loses his life for My sake will find it. For what profit is it to a man if he gains the whole world, and loses his own soul? And what will a man give in exchange for his soul?’” Matt 16:24-26

How can you help?
In 1987, while leading a Frontline Mission team across the border, we were arrested, stripped and beaten. Thrown into cells covered with human filth; deprived of water and food, blindfolded and thrown into an overcrowded prison with no beds or electricity in the cells. The whole prison seemed to be one big stinking disease factory. With our shoes taken away, walking barefoot, with cut and bleeding feet, amongst this filth, we could only imagine how many infections and diseases God protected us from. In our prison cell there was Isaiah Moyo, a young South African, who had been wrongfully imprisoned.

Isaiah had been severely tortured and burnt with red hot pokers. His knees were calloused from the many hours he spent kneeling on the concrete floor praying to the Lord. When, by God’s grace, international prayer and pressure forced the Zambian government to open the prison doors and set us free, and I determined to campaign for the release of Isaiah Moyo.

Publicising their plight
Later I heard that prison wardens had rushed with their radios to Isaiah Moyo in Lusaka Central Prison shouting: “Isaiah, that white South African missionary who was locked in here, he is speaking on the radio – and he is talking about you!”

Isaiah heard the tail-end of my interview as I gave people his prison address, and requested them to send care packages, with salt, soap, sugar, vitamins, pens, paper, etc. Isaiah later told us that from that time on, he was never mistreated again. Mail sacks of letters and parcels were dragged into the cell. He became the most popular person in prison. He had so many trading items which everyone wanted, people couldn’t do enough favours for him.

Setting the captives free
The BBC World Service radio programme had raised him to celebrity status in the prison. Soon he was set free and allowed to travel back to South Africa to be reunited with his wife and two children. This was my first experience of seeing what an influence Christians can have through prayer and pressure. Publicity provides protection for the persecuted.

As our Lord Jesus taught in Luke 18:1-5 – even an unjust judge will do what is right in response to persistent prayer and pressure. As virtually every dictatorship in the world is a beneficiary of vast amounts of foreign aid from Western nations, this provides leverage. Most dictators prefer foreign aid to foreign prisoners. If given a choice, they will let the prisoners go free in order to continue to receive the Western dollars, pounds or euros.

Whatever we bind will be bound, whatever we loose will be loosed. By the power of prayer, and through persistent pressure, we can see the powers of darkness limited, prison doors opened and captives set free.