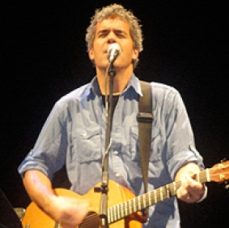 Rebuilding the Ancient Ruins – Mark Tedder
Mark Tedder is no stranger to big visions: his last project, ‘The Door’, was the first live worship recording in China’s history and a powerful statement of Christianity’s enduring strength under Communist oppression.  After leaving Beijing, Mark and his wife Carrie took a month off to travel in Europe, and found themselves inspired by the Christian heritage that surrounded them – a sleeping giant ready to be re-awakened.

“We weren’t looking to catch a new vision,” Mark remembers, “We just wanted to sit in cafes and regroup after our amazing experiences in Beijing.  But being a follower of Christ, you can’t really get away from what God wants to stick in your heart!”  Visiting the stunning cathedrals of Europe, Mark and Carrie were awestruck by the art and architecture, and saddened by a seeming lack of connection with the modern world.  “There didn’t seem to be a lot of activity going on in these huge structures that at one time had been created for the glory of God, and it broke our hearts.”  Moved by a sense of Europe’s spiritual desperation and the call of Isaiah 58:12 to ‘restore the ancient walls’, the Tedders caught a new vision after all, and the ‘Restore’ project was born.

A Strong Foundation
A prophetic call to Europe to return to God, ‘Restore’ was recorded in Lincoln, Lisieux (France), Prague and Florence at acoustic events in historic cathedrals.  For the musicians involved, the experience of worshipping in these historic buildings was humbling.  “It was a powerful reminder that we’re building on the faith of those that have gone before us,” Mark explains.  “Scripture talks about one generation passing along to the next, and we were overwhelmed to the point of tears at times, knowing that we were simply a link in a very long chain.”

Far from Hollywood’s fairytale image of Europe, ‘Restore’ is built on foundations laid during the Tedders’ twelve years living and ministering all over the continent.  In fact, it was their experiences of cross-cultural worship in Europe that led Mark and Carrie to form Worshiplanet, an international ministry dedicated to mobilising, equipping and networking local churches around the world.  “I think even back then, God was working on our hearts for the ‘Restore’ project,” Mark says.  “We had an appreciation of European cultures and we understood that God is a lover of diversity and He represents all nations, tribes and tongues.  I think it really helped us to go into ‘Restore’ with that perspective of God, to come alongside people and listen to their stories, and try to get a local expression of worship in each country we recorded.”

Hope for the Future
The resulting CD/DVD is a vibrant fusion of songs, poems, spoken worship and beautiful imagery proclaiming God’s faithful sovereignty over the European nations.  Opening with the energetic ‘I Believe’, based on the apostles’ creed, the record incorporates a Czech string quartet and shades of jazz from Italy, as well as spontaneous demonstrations of worship such as a French pastor’s passionate prophetic prayer over Europe.  The title track’s plea, “Show your power in this land, bring salvation,’ expresses a strong spirit of intercession for a continent that has wandered far from its creator.

“God is not restricted by frontiers,” Mark reminds us.  “A lot of people are saying that south of the equator there’s a powerful work of God, but north of the equator it’s almost like He’s given up.  But I really think God’s not restricted by that.  This project wasn’t about a local church having a ‘knees up’ worship gig: it’s a shout out to Europeans to come back to Jesus; it’s a restoration call.”  To those of us disillusioned with our culture’s abandonment of its faith, Mark issues a challenge: “There’s so much to do that sometimes churches don’t act because they don’t know where to shoot the arrow.  We can become so focused on other people that we lose sight of who we are and what we’re called to do, but God hasn’t pivoted from His position.  There’s still hope for Europe, for this continent that God so loves.”