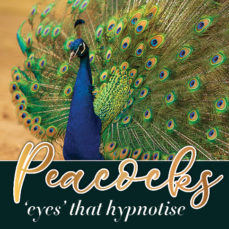 Did you know that the motion of a peacock’s tail, the feathers being shaken, is what actually attracts a peahen? It had once been thought that it was the size of the male’s feathery train, or the number of colourful ‘eyespots’—but this is not the case! When the peacock vibrates his tail, it seems those ‘eyes’ (eyespots) can hypnotise the one he is trying to woo by creating a “dynamic iridescent background” around each eyespot. The behaviour of the eyespots during tail-shaking is remarkable – not their movement as such, but their apparent non-movement.