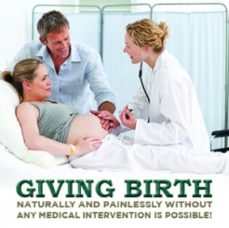 When a pregnant woman anticipates the delivery of her child, she is often filled with fear and dread. The horror stories told to her by her friends as well as many movies, paint the picture of childbirth as a painful, dreadful and traumatic experience.
The fear of pain
A Biblical principle (Job 3:25) is that what you fear will come upon you. This is true even in childbirth: the fear of pain can cause a painful delivery with many subsequent complications.
When you have fear, your brain stimulates a stress reaction in your body which was originally designed by God as a survival mechanism to help you in an emergency situation. During this reaction, stress hormones are released which bring about various changes in your body to enable you to react quickly so that you can either fight off that danger or run from it – hence it is called the ‘fight or flight response’.
In this fight or flight state, blood flow is shunted away from organs that are not important in an emergency i.e. blood is directed away from your skin, digestive system (no time to eat a hamburger when you have to run for your life!) and your uterus – and the blood is instead sent to your brain, heart and muscles in your arms and legs so that you can think quickly and are geared up to either fight or run from the danger (flight).
As a result the uterus does not get enough blood and oxygen…and this lack of blood supply is what causes the pain (another example of pain caused by a lack of blood supply is chest pain in a heart attack where the blood vessels supplying the heart are blocked). The more pain is experienced, the more anxiety it causes, which results in more pain and the whole process is exacerbated.

Labour becomes exhausting
The lack of blood supply to the uterus makes the labour become inefficient because the uterus does not have the energy to effectively contract and push the baby out like it is meant to. Therefore the labour is prolonged and the mother becomes exhausted as a result of this time lag and pain…with adverse effects and complications on her and the baby.

Is painful labour a curse?
As Christians we often incorrectly believe that a woman has to expect pain in child birth because that is part of the curse put on women when Eve sinned in Genesis 3:16: “I will greatly multiply your sorrow and your conception; In pain you shall bring forth children.”
Firstly, when Jesus died on the Cross, He became a curse for us so that our sins may be forgiven and that by His stripes we would be healed and made whole. There is power in the Blood of Jesus to break all curses over our lives including the curse on child bearing. We are relieved from that curse when we appropriate that blessing by faith and obedience.
“Surely He has borne our griefs (sicknesses, weaknesses, and distresses) and carried our sorrows and pains [of punishment], yet we [ignorantly] considered Him stricken and afflicted by God. But He was wounded for our transgressions, He was bruised for our guilt and iniquities; the chastisement [needful to obtain] peace and well-being was upon Him, and with the stripes [that wounded Him] we are healed and made whole.” Isa 53:4-5.

Hard work, but not traumatic
According to the Strong’s Concordance, the words in Genesis 3:16 which talk about the woman’s sorrow being multiplied during child birth are not referring to pain as we understand it. When we use the word pain, we equate it to the pain that we would, for example get when we sustain an injury. However that is not what this Scripture is referring to.
The word actually comes from “toil” which is also what Adam had to do when the curse was put on him for his sin. The word toil also means “pang” which is a pressure that comes – in other words a contraction during labour. Therefore a woman has to toil, or work, hard during labour (contractions) to deliver her baby, but it does not have to be painful. When you bend your elbow for example, the movement was brought about by the contraction of your bicep muscle – was that painful? Neither does contraction of the uterus muscle in labour need to be painful!

God intended to accomplish a deep work in a woman during childbirth In 1 Timothy 2:15 it says that a woman shall be saved in child bearing. The word “saved” in that Scripture is not referring to salvation – women do not gain their salvation through having children! That word “saved” means that a woman shall be “healed, preserved and made whole” through child-bearing. When a woman goes from the
beginning to the end of the child birth process without some extreme medical intervention or drugs, there is a deep work that is accomplished within her body and soul that is unparalleled to anything in the world that a woman could ever experience.

A beautiful experience
Here is part of one lady’s testimony who had a beautiful and painless birth which illustrates that deep work that God intended to accomplish in a woman during childbirth: “I don’t condemn anybody who had epidurals because I would have been the first candidate to raise my hand for pain relief, but it’s just that I didn’t need it. The way that Jesus Christ met me in those moments is difficult to talk about without getting emotional. It restored to me my womanhood in a way that I didn’t know I needed to be restored. It took me to a place in my identity and in my being where there was a strengthening in who I am.”
“When I have times in my life where I’m having a really rough day or am going through a difficult period – this sounds so bizarre – but what I think about to encourage myself in the Lord is my birthing experience! Most people don’t want to think about it ever again! But the way God met me and brought [revelation to] me through trusting Him through that experience – I’m a better woman because of it. I have more to give  to others because of what happened in that birthing time. The Word of God says that you’ll be healed, preserved and made whole – that’s what the Lord intended during child birth. I don’t know how He came up with the idea to use that in a birthing experience, but He did and I believe that that is what the enemy wants to rob from women.”

Restoring what God originally intended
This knowledge is for God to come and restore to women what the enemy tried to cheat them of in child birth, which is being healed, preserved and made whole! Visit our website for a free book with a more in depth teaching on how to apply Biblical principles so that giving birth can be a painless and beautiful experience.


Dr. Michelle Strydom founded Eagles’ Wings Ministries. Enquiries for her materials (Books and DVDs), or to book her for a conference, please contact Charmaine: 082 920 7826 / cj.eagleswings@gmail.com. For references to medical journals which support the information in this article, read the article online at www.joymag.co.za. See www.eagleswings.co.zw for free resources and articles.
References: