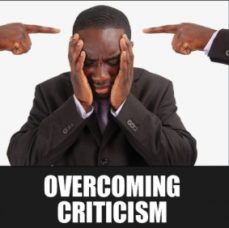 South Africa recently witnessed the largest prayer meeting in its history when more than a million believers gathered in Bloemfontein for the massive, “It’s Time” call to prayer. Thousands more gathered in duplicate prayer meetings in towns and cities around South Africa. It was a hugely impressive movement acknowledging our need for divine intervention in our nation.

Criticism over the event
Sadly, there were those who took to social media to criticise the event. Perhaps it didn’t fit their particular theological bent. Or perhaps they were never consulted. Or perhaps it didn’t address their particular political agenda. Instead of being overwhelmingly grateful that there was this massive expression of our need of God, they settled for nit-picking.

Criticism over JOY
We even get people who regularly criticise JOY! Magazine and discourage people from reading it, even though it is reaching tens of thousands of people each month with positive, inspirational, and challenging articles that are desperately needed in our country.

A critical spirit in the Bible
There was a man in the early church who seemed to have this same critical spirit. His name was Diotrephes. He was a person who was probably a church official, who abused his position, and who ruined his usefulness for the Kingdom of God because he got things out of perspective. You can read about him in John’s third epistle where we read about, “Diotrephes who likes to put himself first”.

…For the full article, pick up a copy of our August issue of JOY!