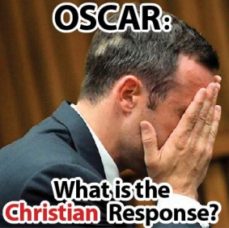 South Africans have been glued to the events taking place in a Pretoria courtroom at one of the most dramatic trials in our judicial history, and soon a verdict will be given in this “media-saturated” case.
I once conducted a telephone interview with Oscar and found him to be polite, articulate and friendly.  And I know of others who are personal friends of his and speak highly of him. I certainly hope and want to believe he’s innocent and this was all a mistake.

The sick humour is appalling
I am appalled by the jokes and sick humour surrounding this case. We are talking about a life that has been cut short, about two families that have been devastated. How can anyone find this tragic situation funny?
This is not some make-believe soap opera. These are human beings that have experienced the deepest shock and sorrow. I think it is the depth of callousness to joke and ridicule the accused about such a heartrending event. (I personally believe Oscar is telling the truth, however everybody is entitled their own opinion).

Evidence for the defence
I believe that the athlete really did hold serious concerns for his personal safety. This is not altogether surprising given South Africa’s disturbing record of crime and violence. He slept at night with a pistol by his bedside, a machine gun up against the wall, and a cricket bat too. There is no doubt that he was concerned about safety and security…
It is also not unreasonable to suspect that Oscar’s own background and disabilities as a young boy growing up without legs predisposed him to significant feelings of inferiority and inadequacy. Children can be utterly cruel in their comments and attitudes towards other children with disabilities and less than normal abilities.  Stripped of his prosthetic legs he must have felt totally vulnerable. When he  woke up in the middle of the night and heard noises, his first impulse was to defend himself. He grabbed his gun which helped him feel equal to others with normal faculties.
I travel a lot. I know what it is to wake up in the middle of the night and be completely disorientated, not sure where in the world I am.
I think that the prosecutor actually over-stepped the mark in his brutal questioning of Oscar. He may have been trying to break him down with a view to getting a confession from him, but in his brutal questioning he may have elicited some sympathy from the judge rather than enhancing his case for guilt.
What about the seeming inconsistencies in Oscar’s testimony? I am sure that given the tension and extreme emotion of the situation, it was difficult for Oscar to think straight and give a precise version of the events.

Beyond reasonable doubt?
Is there sufficient evidence to prove “beyond reasonable doubt” that Oscar is a murderer? I don’t think so. There is only one witness, Oscar, and he alone knows if there was in fact an argument and if he intentionally shot Reeva Steenkamp.
So is Oscar a murderer? If it was a pre-meditated murder then it would certainly have been more subtly planned and executed. If it was a case of a lover’s quarrel and a sudden burst of anger, surely no sane and sober person would have jettisoned his entire life and career and reputation with one senseless act of rage.
I believe that Oscar is telling the truth; however, even if the paralympian is found totally innocent, his life is ruined. His reputation is totally tainted. He can never again be a role-model of perseverance and personal determination and achievement. He has lost the opportunity for lucrative sponsorships. No major sponsor would want to be associated with such a tarnished icon.

Our attitude to the case
So what should a Christian’s attitude be towards Oscar? Whether he is found guilty or innocent, he will need an avalanche of prayer for inner peace and strength. He is likely to become an increasingly isolated figure.
Is there any future for Oscar? Can we find any word of hope from the Word of God or from Christian history? Are there any examples of people that have climbed out of the pit of degradation and hopelessness and moved to a place of blessing and fruitfulness?
The obvious example [of a life that appeared to be ruined, and then redeemed] is Joseph, sold into slavery by his heartless brothers and then cruelly thrown into prison as an innocent victim. God turned his life around and made him into the most powerful man in Egypt.

A Scriptural perspective
We are assured by Scripture that there is no one that has gone beyond the reach of God’s grace.  For “He is able to save to the uttermost.”  Heb 7:25.
If indeed Oscar is shown to be an intentional murderer we must remember that God’s servant, King David was also a murderer and yet the Bible describes him as a “man after God’s own heart.” Because David truly repented, he was still able to enjoy the fellowship and favour of God.
The Apostle Paul consented to the persecution and killing of Christians before he had his own Damascus Road experience.
Oscar professes to be a Christian; he grew up in a Christian home, and accepted Christ as His Saviour “more or less before I could remember.” Oscar is also surrounded by several mature believers, so I am certain he is hearing the truth of the Word of God. regularly.
If convicted, God can still use Oscar in prison. There have been some wonderful stories of how God has worked throughout the world in prisons and through prison ministries. There have been spectacular U-turns in the lives of long term prisoners and people who have committed the worst of crimes. Many are now serving Jesus and living lives that reflect the fruit of the Spirit. The Bible says, “If we confess our sin He is faithful and just to forgive us our sin and cleanse us from all unrighteousness.” 1 John 1:9.

Justice must be served
There is forgiveness and cleansing from the worst of sins.  If Oscar is guilty, God can forgive him and cleanse him. Justice must be served, and the law must run its course. But if he is innocent and made an honest, tragic mistake, God can turn this into something positive and Oscar can emerge stronger in his faith with a far deeper relationship with God.
So let us pray for all involved in this tragedy, rather than spread gossip and unhelpful rumours and theories. Prayer can bring life out of death and hope out of despair.
From a human standpoint the outcome is extremely bleak whatever the court decides.  From God’s standpoint there is hope, there is a future, but God’s people need to do their part and pray. 