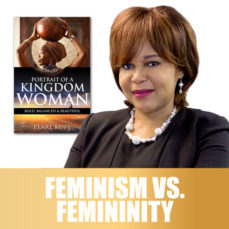 Femininity is a gift, given to the female gender by God. It is an intrinsic part of the DNA of a woman, which God gave as both a gift and a weapon with which to build His Kingdom. Feminism, on the other hand, is a secular, man-made, & humanistic resolution that claims to promote equality; but in reality promotes division, strife, and hatred.

It does not promote the reconciliation of genders, which is a Kingdom purpose and principle. It is a counterfeit, pseudo, and perverted option that has been offered to women as a resolution, when in truth it is a problem, not solution. Proponents of feminism do not understand its destructive and anti-Christ roots. Genesis 1:27 says that, “God created mankind in His own image, male and female, he created them”. God’s Word always promotes reconciliation of genders. Feminism promotes empowerment of women in a divisive manner.

. . . For the full article, pick up the July copy of JOY!, now on sale nationwide!