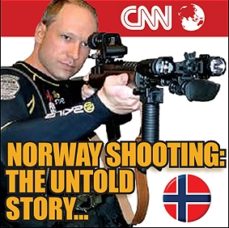 Norway Shooting: The Untold Story
When the story broke that a crazed Marxist, Islam-hating, gunman had unleashed a slew of bullets on unsuspecting youth in Norway, the world drew its breath in shock. Coupled with the bombing of the government’s headquarters in Oslo, the twin attacks reminded the world that the war on terror is not over, and that if we do not address people’s xenophobic hatred and inherent ‘sin’ problem, we will continue to endure the malevolent actions of intolerant lunatics. Disturbingly, the liberal media (as always) attempted to immediately  attribute the motivation of the attack to ‘religious fundamentalism’ and more specifically, to Christianity.

The problem with pseudo-believers
As soon as the slightest details emerged of the killer, the media juggernaut jumped into action, framing the massacre as a “Christian vs Muslim” anti-immigration plot. And…the ever gullible public just lapped up the opinion of the news media – with true, committed, born-again Christians taking the rap once again for the actions of irresponsible, illegitimate pseudo-Christians like Anders Behring Breivik.

The lawyer representing Anders Behring Breivik has claimed that his client is most likely insane. If so – the story becomes immediately less interesting. In the battle of faith, the link of a massacre, reminiscent of the Crusades to Christianity, is a vital lever for present day God scoffers and mockers.

Analyse and investigate the info
As a journalist and media critic, I am always amazed (and appalled) at the lack of journalistic integrity and thorough investigation conducted by news houses.

32 year old Breivik had posted on his Facebook page that he was a ‘Christian’ (though there is no indication on his Facebook how seriously he took his faith, or if he even subscribes to Biblical values). In his extensive 1 500 page manifesto, Breivik expressly states he is not a religious man. In the manifesto, written in English and reportedly posted on the Internet hours before the killing, Breivik reveals that he had been planning the attacks for years.

What the Word says
An incident such as the Norway attacks illustrates yet again, the need for Christians to be educated in articulating their faith and the principles by which we live and are judged (according to the Bible).

Do not let the world mislabel your faith. Find out the facts, analyse what you read, know what your Bible says and be prepared to give a reason for the hope you have (1 Pet 3:15). Don’t accept sub-standard, biased reporting!