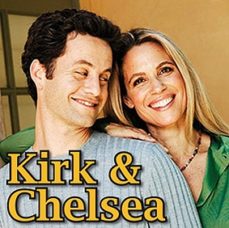 Fast-forward a couple years, and people may remember Kirk as Cameron ‘Buck’ Williams in the Left Behind apocalyptic film series (based on Tim LaHaye’s books). Mention the movie ‘Fireproof’ though, and immediately Christians the world over recall Caleb Holt, the fireman with a marriage heated by the flames of life’s fire.

To date, ‘Fireproof’ has  been the most successful Christian film of all time (Passion of the Christ was not produced by a Christian company) and effectively catapulted Kirk into the limelight once again. Yet, movies are not the chief focus of this evangelist and his supportive wife, Chelsea. For years Kirk has worked with Ray Comfort and ‘The Way of The Master’ evangelism ministries. Kirk is passionate about the Gospel and works tirelessly with Ray (a New Zealander), Todd Friel (an American radio host) and their team, in producing contemporary resources (like DVD’s, documentaries and teen-driven content) to reach a media saturated world.

Growing up in the limelight…
Born in 1970, Kirk is no stranger to media, having  starred in his first commercial for a breakfast cereal at age nine. Though his parents come from ordinary backgrounds (his dad was a school teacher and his mom a home-maker), Kirk’s younger sister Candace has also worked in showbiz (you may recall her as DJ Tanner in Fullhouse). Kirk met his actress wife Chelsea on the set of Growing Pains and they were married in July, 1991. This Father’s Day, we felt it appropriate to interview Kirk (himself a father of six; two biological and four adopted children) about media, ministry and marriage. It was not easy to track this international traveller down, but we got the scoop for you!

It must be challenging to remain steadfast within the entertainment industry. What are the difficulties you face?
I would think that it must be hard being a Christian in South Africa too. Persecution and temptation takes on many different forms…regardless of the industry you are in. The truth is, no matter where you are, if you are living godly in Christ Jesus, then you will suffer persecution. I thank God that America is still a free country and I hope it stays that way. If your heart is to follow Jesus because He alone is the Saviour, then you understand that you have found the “pearl of great price” and are willing to “sell all you have” for it.

What are some of the stresses a married couples in Hollywood encounter?
Well, Chelsea and I have been wonderfully married for 19 years…which I think is something like 90 in ‘Hollywood years’! One word has saved our marriage – forgiveness. My wife has had much more practice forgiving me than I have of forgiving her, so she’s much more skilled at it and does a great job.
Here in Hollywood, the name of the game is comfort, pleasure, and convenience. If your spouse doesn’t float your boat, find a new one. If you don’t ‘feel in love’ then you can fall out of the relationship with a quickie divorce. Movies and television, with all of it’s glamourising of pornography, promotion of adultery, feminisation of men, and disrespect for women, kills marriages daily. In marriage, the heart of the problem is always the problem of the heart. It doesn’t matter whether you live in Hollywood or the Holy Land, selfishness is the real killer, and only God can redeem the human heart.

As a father and husband how is your family life affected by your film career?
I travel too much. Last month, I think I won the “Bad Dad” award because I was away so often. In fact, I am writing this article on an aeroplane on my way to Atlanta (the Camerons live in California). Filming a movie, speaking at churches, and even teaching marriage seminars can be just as much of a threat to your family life as alcohol or drugs.
Many men and women find themselves addicted to the thrill of career accomplishments, the praises of people, and the power of influence. Millions of parents unknowingly sacrifice their children on the altar of career goals, selfish pursuits, and personal accomplishments, leaving their kids out in the wilderness, not knowing what a real mother, father, or family is designed to be.
That’s why I’m personally committed to making more movies about fatherhood, family and marriage.

How did you come to be soundly saved?
Great question. Theologically, I’d say that God in His great mercy, reached down, turned my heart, and brought me to my knees in repentance and faith in the Lord Jesus. Personally, I was 17 years old, working on Growing Pains, and didn’t have a care in the world. I was rich, famous, and happy.
But as I began asking the key questions of life (“Where did the world come from?”, “Why am I here?” and “Where will I go when I die?”) I began to loosen my grip on atheism and doubt my doubts. I attended a good church one Sunday and heard the Word of God preached. I began to seek after the Truth about God and asked God to reveal Himself to me in a clear, understandable way – if in fact He was real. He did, through the Gospel and some faithful friends who led me to the Cross and helped me to grow in my faith.

When did you start working with evangelist Ray Comfort?
While I was at a large convention promoting the ‘Left Behind’ movie, I was given a CD sermon called ‘Hell’s Best Kept Secret.’ I was so blown away by the message that I called the preacher and asked to meet for lunch. We did and Ray Comfort and I became fast friends.
Together we began to preach and teach together on TV and at live conferences. Our common desire was to teach Christians how to share the Gospel simply, effectively, and Biblically – the way Jesus did.

Has your evangelistic ministry created problems for you within the acting industry?
That depends on how you look at it. Sure, I bet there are parts I didn’t get because I’m the ‘Christian actor’ who likes to preach the Gospel. But I’ve also been spared the embarrassment, shame, and pain of being cast in roles that are dishonouring to the Lord. My faith and ministry have provided me with a filter that strains out much of the poison that I would otherwise have to deal with, and for that, I am grateful. On the flip side, the movie ‘Fireproof’ and the TV programme ‘The Way of the Master’ have strong messages of faith in Christ, and have actually revitalised a career in acting for me. To be honest, I don’t worry about it. God has always been faithful and my job is simply to be faithful in return.

Fireproof has rocketed to the top of the DVD sales lists and Christian movie hall of fame. How did you get involved?
After seeing Sherwood Pictures’ second film ‘Facing the Giants’, I was so impressed with the all-volunteer cast and crew, that I offered my acting services for the next movie. The producers asked me to audition for the role of Captain Caleb Holt, and I did. They gave me the part and the rest is history…

What film projects are you considering for the future?
I’m working on a documentary about America’s Christian heritage and the secret to returning our country back to it’s former glory, faithfulness, and prosperity. My wife and I are also developing a Gospel centred marriage and family ministry and a family action/adventure movie. I am also busy with Campfirefly. (Chelsea and Kirk currently run a foundation that hosts retreats for seriously ill children and their families. Children and their loved ones are treated to a week long, all expenses paid vacation, that offers them a break from the stresses of hospitals and medical treatments).

Any advice for aspiring Christian actors?
I’d say, “Put on your armour, because you’re going to need it.” Get plugged into a good church, Bible study, or Christian fellowship group as soon as possible, or prepare to die a painful death. Hollywood is notorious for shredding young thespians’ morals, convictions, and faith, reducing them to sad statistics and tools in the hands of the devil. “Buckle up!” is what I have to say, and “Choose for yourself this day whom you will serve.”

In closing, what charge can you leave with the husbands and fathers reading
JOY! Magazine?
Men, we must take back our marriages and families for Christ. Jesus came to win His Bride and beautify her by laying down His own life for her, setting her apart in the world as His precious possession to treasure for all of eternity. We must do the same for our dear wives. Also, don’t miss a movie coming out late 2010 or early 2011 called ‘Courageous.’
It is Sherwood Pictures’ next film after ‘Fireproof’ and is all about fatherhood. It should be a tremendous picture and promises to ignite a fire in the hearts of men everywhere to be the fathers God has called us to be. Read a great book by Brian Molitor called, ‘Boys Passage, Man’s Journey’. It will stir you to rise up and show yourself a man.