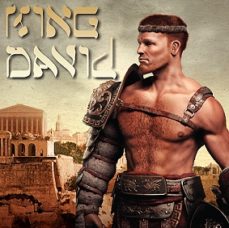 King David: The Atonement Story
David was troubled. Jerusalem lay before him, grey under the shadows of approaching rains. As the king gazed from the window of his palace, his mind was haunted by the dark things from his past. It was getting warmer, and soon he would again go out to war against the sons of Ammon.

The fall of David
Many things kept him from peace as he watched his city. His life was coloured red from the blood of battle. Yet he had achieved so much. All the tribes of Israel were again united, and he had conquered his neighbours to every border.

From the window he could see the courtyard where he had first seen Bathsheba. As he thought of her David mused, “I will soon be a father again. What will I give to this child when I feel so spent from life?” An old guilt pressed upon him as he remembered how Bathsheba’s nakedness had possessed him.

“No, it was not lust”, David told himself, hanging his head, “I first loved her the moment we met in the desert Ziph.” Images of the young Bathsheba came to him. It had been at a perilous time, escaping from Saul. Her clothes were dust-stained and tattered, yet she glowed with an inner-beauty. He adored her. But at what cost did they share their love? David closed his eyes, pressing his fingers through his beard.
Uriah, David thought of the soldier he had ordered to the front lines.

“Men die in battle,” David groaned. “I did nothing wrong.” A cold breeze touched David’s exposed skin, carrying the smell of rain. He’d lost the favour of many good men.

Being confronted by truth
Eliam was a strong fighter, David thought of Bathsheba’s father with a sigh. He had been loyal – one of his Mighty Men. Now he despised David for bringing such shame to his family.

Ahithophel. David longed for the sage counsel of Bathsheba’s grandfather. “Oh Lord, I was not wrong in loving her,” David prayed, looking out at the dark clouds when he heard someone walk into his private chambers. He was suddenly irritated at the intrusion. “I said I wanted to be alone with my thoughts. Do you not…” Turning, David saw Nathan. “My friend, it is you.”

David stiffened as he met the prophet’s eyes. Something was wrong. “I come not for pleasantries, my king,” Nathan said, and David heard the heaviness of his voice. “I come to seek judgement.”

The prophet speaks…
David moved to the centre of the room, indicating Nathan to sit. He declined. “There were two men in one city, one rich and one poor,” Nathan began to speak as David sat on an ivory chair, a shaft of light illuminating the redness in his hair. “The rich man had a very large number of sheep and cattle, but the poor man had nothing except one little ewe lamb. He raised it, and it grew up with him and his children. It shared his food, drank from his cup and even slept in his arms. It was like a daughter to him.”

Confronting King David
The king listened, taking in the prophet’s words. “Now a traveller came to the rich man, but he refrained from taking one of his own sheep or cattle to prepare a meal for his guest. Instead, he took the ewe lamb that belonged to the poor man.”

David’s fists tightened at the words, and he glared at Nathan. “As surely as the Lord lives, the man who did this deserves to die,” David roared. “He must pay for that lamb four times over. He had no pity.” Nathan’s eyes flared in rage. “You are the man!” he said with trembling fingers. The words sounded harsh from tight lips. David’s eyes widened as he jumped up, knocking over the chair.

The punishment for sin
“This is what the Lord, the God of Israel, says: ‘I anointed you king over Israel, and I delivered you from the hand of Saul. I gave your master’s house to you, and your master’s wives into your arms. I gave you the house of Israel and Judah. And if all this had been too little, I would have given you even more.’”

David could not speak. His heart pounded in his chest. For months he had reasoned away his guilt, even at the cost of feeling God’s presence diminish. And in an instant, Nathan had made him judge himself. The weight of the truth crushed him, the walls closing in on him. He could not breathe.

“This is what the Lord says: ‘Out of your own household I am going to bring calamity upon you. Before your very eyes I will take your wives and give them to one who is close to you, and he will lie with your wives openly. You did it in secret, but I will do this thing in broad daylight…’”

A broken heart
David stepped back with wild eyes, the words assaulting him. “I’ve sinned against Jehovah,” was all he could get from his lips, his face bleak with sorrow.

“David, the Lord has taken away your sin. You are not going to die.”

David knew there would be no rest for him as the prophet’s words thrashed though his mind. His lips quivered. Then Nathan ruined him. “Only, because by this deed you have given great occasion to the enemies of Jehovah to blaspheme, this child born to you shall die.”

“Oh Lord, No. Please, have mercy on me, O God, according to Your loving-kindness; according to the multitude of Your tender mercies, blot out my transgressions,” David cried out, lifting his hands up to the stone roof, draped with silk. With a breaking voice, he doubled over, gasping for air. The King tore his robe in agony. “Not my child, Lord.” David wept…