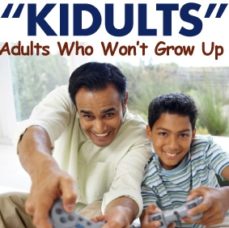 Today it seems that ageing is accompanied with a growing paranoia and relentless pursuit to stay young. We frequently hear that “50 is the new 30” and everywhere one looks you see men and women desperately clinging on to their youth.
Worryingly, this is all part of the growing phenomenon ‘kid-ults’ (a.k.a. ‘adultescents’), the social epidemic of adults who have difficulty properly maturing as adults in society and taking the reins and responsibility for their families and lives.

Some of the following may sound familiar:
•    30-something adults spending much of their weekend glued to computer games, looking and acting a bit too much like the adolescents they used to be
•    Or else the example of the husband and father who needs time out to ‘find himself’, and so takes off on his Harley, leaving his family to fend for themselves
•    And what about the true story of Giuseppe Andreoli, ordered by an Italian court of law to fork out the equivalent of 500 British pounds (about R 6 000) a month to his 30 year old son indefinitely, as the lad was currently living with his mother and not yet gainfully employed
•    Not to mention the explosion of adolescent-type gimmicks in society: burping (and other) ring tones, endless trivial ‘status posts’ on Facebook, as well as infantile rock stars as role models for teen and adult alike.

We are amusing ourselves to death?
So what lies behind the new trend? For writer and social observer Jenny Bristow, one problem is the culture itself. Too many choices, too much fun, not enough stability and responsibility. “This generation is collapsing under the burden of too many choices,” she notes. “Bereft of a structure to their lives, young people are frantically searching for signposts and goals.”

We live in a world where you can get (almost) anything with a single phone call or click of a mouse, from the latest yummy pizza-topping to a state-of-the-art cell phone complete with giggling ring-tone. For a culture where leisure and pleasure is a billion-dollar industry, we’ve become experts in the art of self-gratification. From advertisers to TV shows, we’ve got it easy. Maybe too easy…

We must grow up
There’s an old Biblical principle, that suffering produces character (Romans 5:3-4). Not that anyone’s advocating suffering per se, but it’s a simple fact of life that work, effort and maybe a little stress are essential parts of growing up – and, in fact, of maturing us up as people and better human beings. The sobering fact is that we live in a ‘pied piper’ culture, with the pan-piper of the fairy-tale enchanting so many into unchartered waters, or maybe into the Peter Pan world of Never-Never-Land, where children just don’t grow up.

The observation of comedian Sean Hughes on his own generation is eerily familiar: “People are refusing to grow up; this generation is very weird. There’s been this kind of cop-out. Even friends who are married are still kids in many ways.”

How did we get here?
Perhaps the real root of the problem hearkens back to the 1960s, when that generation rebelled against the morals and norms of the day – including Biblical principles of sexuality and family. Radical feminists took to the streets with mantras like, “We want to destroy the three pillars of class and caste society: the family, private property and the state.”

As a result, divorce, unwanted pregnancies, and marital strife soared. With the break-up of countless families, it is little wonder that in our age we are seeing so many struggling to come to maturity – after all, if parents are not around to bring their kids to maturity, then who else is going to?

Modern culture dictates
So too, the ‘anti-establishment’ and ‘youth rebel’ attitudes of that 60s generation have carried down to this day, becoming an accepted part of a modern culture that celebrates immaturity. Little coincidence that the ‘me’ generation and wave of consumer selfishness quickly followed. Political commentator P.J. O’Rourke (once a Sixties radical and now deeply grieved by his former actions), laments: “That’s the worst thing of all about the Sixties – the one really unforgivable thing – that it’s been straight downhill ever since.”

Who says art doesn’t imitate life?
For the media the new ‘kid-ult’ is often portrayed as ‘cool’ or the smart thing to be. It’s ok for Pauly Shore and Owen Wilson (not to mention perennial bachelor George Clooney), so why not for the rest of us? Take some recent Hollywood films, for instance. Adam Sandler cuts a bittersweet character in ‘Grown-Ups’, a story about former schoolhood pals, now adults, who go off for a reunion weekend.

The problem is, it seems that in the space between childhood and adulthood, neither he nor his friends seem to have done much real maturing. Rob (Rob Schneider) is a confirmed womaniser who can’t keep a relationship – let alone a marriage – down.

We learn from the movies
Sandler’s ‘Lenny’ is little more than an overgrown adolescent himself, telling infantile jokes and tripping over his metaphorical shoelaces for much of the film. The humour is mostly of the bathroom-and-bedroom variety – precisely the sort of thing you’d expect from adolescents. About mid-way through the film it hits you: how are they supposed to cope in an adult world when they’ve never become adults themselves, and still seem to be stuck in some kind of mental teenage-hood?

And how come so many of Pauly Shore’s films (Son-In-Law; Jury Duty; In the Army Now) always seem to surround an infantile adult character who can get nothing right in life, earning the derision of the adults around him?

Suffer the children
This also means, of course, that the real children suffer as well. For if those responsible for child-rearing are themselves behaving like children, then what hope have the actual kids of properly maturing? For psychoanalyst Adam Phillips, “The modern preoccupation with childhood means that people have lost a sense of there being a difference between adults and children.”

Mutton dressed as lamb
For UK journalist E. Jane Dickson, one needs look no further than to many of the fashions of the day:  “It is possible today for a 60 year old, a 20 year old and a two year old to step out in exactly the same T-shirt, chinos and trainers. Girls of three are tripping around, just like mummy – or, for that matter, granny – in miniskirts and crop-tops. If we can’t look like children (and few over-30s can get away with smocked frocks) then we are determined the children will damned well look like us.”

One mom says with pride that the relationship between her and her pre-teen daughter is ‘more like sisters’. In some cases it is hard to distinguish the difference between father and son – both give the impression of being adolescents, whether in dress sense or behaviour.

A serious problem
Yet is this simply a case of parents ‘relating’ to children, or is it something more serious? It’s great that fathers can relate to their kids. It’s great to go out playing and sporting with your son, or for mom to go off  shopping with her daughter at the mall. Father-son bonding is great – and maybe there’s not enough of it in our society.

Perpetual adolescence
But, what we’re seeing more and more nowadays, is not so much fathers relating downward to their sons, but more like something that resembles two kids playing. Yet, maybe children want adults, not fellow-siblings.

Children don’t want a role model who’s going to be a fellow-child indefinitely; they want one they can look up to. They don’t want a fellow adolescent to lead them to the greater things of life: they want an adult, they want a mother and father. Again, there’s nothing wrong with coming down to the level of children at appropriate times, in the sense of relating to them, playing with them, etc. The problem is the perpetual adolescence we are seeing so much of today.

The new ‘adultescence’  is hardly surprising, given the high rates of divorce, AIDS-related parent deaths, and the like. Younger generations simply lack parent role models on whom to base their development.

A growing trend
For UK sociologist Frank Furedi, even many varsity-leavers are just plain scared to go out and find independence for themselves, for fear of repeating their parents’ mistakes, and so continue to live in the parental home indefinitely. According to a recent UK study, the number of adult men still living at home rose by 20 percent between the years 1998 and 2003. What’s more, many of these are well-off white collar workers, and can well afford to be independent.

Healing a broken society
This means that for many 20-somethings, maturity and responsibility come later than usual. Noting once again the parallel with Peter Pan, Furedi notes grimly that, “Our society is full of lost boys and girls hanging out at the edge of adulthood.”

On the one hand, we need to be aware of a media far too fixated on material things – and which will do anything, try any advertising gimmick, to get a gullible public to sustain the billion dollar pleasure-and-leisure industry. We must be on our guard against a culture that encourages trivia and vacuous pleasures.

We need to look inward
On the other hand, perhaps we need to look inward. The Bible is clear that a healthy society can be built only on a traditional family system, with parents acting as role models to bring their children to proper maturity. Satan knows that to destroy the family is to destroy society, to condemn it to perpetual immaturity and ineffectiveness – hence the relentless present-day attack on the family system.

Society needs mature leaders
Genesis 2:24 tells us, “Therefore a man shall leave his father and his mother and hold fast to his wife, and they shall become one flesh.” The verse is trying to say something about maturity and what happens next. When a man has matured, he leaves the parental nest and, now a man, forms a new family, bringing those children to maturity, and so on.

There is something here about men taking up their roles as men and leaders of society, establishing themselves and taking up the responsibility befitting those leaders. Without leaders society cannot go forward. It cannot survive – and perhaps this explains in part the dire state of Western (Christian) society today.

We need to ask God for help
Maybe for many, the problem is never having had an effective parent role model to lead one to maturity as a man or a woman. The thing to realise is that God is ultimately our Father. Fathers are supposed to show, by example and deed, what God is like as Father.

The good news is that even when parents aren’t there for us, God can and will step into the gap – if we let Him. Three thousand years ago David could say, “For my father and my mother have forsaken me, but the Lord will take me in.” Psalm 27:10.

Allow God to come into your life now and show you what the concept of ‘Father’ really means, and reveal His Fatherhood to you. Let God fill your life with His perfect healing today. Pray and ask the Lord to help you take up responsibility in your life and for your family. It’s time to let go of unfulfilled dreams from your youth; embrace the season you are in.