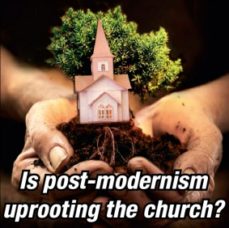 Post-modernism is not a faraway threat. It has already deeply infiltrated the Evangelical Church, influenced the way we ‘do church’ amongst the youth and especially in the American Church. Since the American Church is often a centre of influence for the rest of the world (through publishing and high profile speakers) many in South Africa are following the trend. The ‘Emergent Church’ is the formal expression of these beliefs. Informally, millions of Christians who don’t identify themselves as ‘Emergent Church’ already believe the same things.

Post-modernism is changing the Church
Firstly, it has changed the way most Christian youth view the meaning and purpose of the Gospel – our core message. The traditional evangelistic message is that we have all sinned against God and are thus under His wrath and hence deserve eternal punishment. But the Good News is that Jesus is Lord of all and He has died and suffered in our place. If we believe this, repent of our sins and confess Him as Lord, then He will save us from the wrath of God, reconcile us to God as part of His family, make us whole again and resurrect us as a new creation with eternal life in His Kingdom. There have always been a variety of alternative gospels. But now, with Postmodernism, those gospels which present Christianity as a user-friendly ‘alternative lifestyle’ which helps us live more happily, form community and address social concerns, become more popular. What is marginalised? The Cross, sin, hell, repentance and eternal life. Sin, if mentioned at all, is seen in terms of the harm it does to people, rather than the offence against God. Needless to say, if Christians are missing out the ‘politically incorrect’ parts in their presentation of the Gospel, they are not presenting the true Gospel; and this is unlikely to result in many true conversions.

Post-modernism is affecting evangelism
Secondly, Post-modernism has shifted the approach to evangelism and missions. The traditional approach to evangelism used to be a confrontation with absolute Truth and a demand to repent of sin against God (Acts 2). Before Post-modernism arrived, the seekersensitive church movement began looking for ways of attracting people to come to church without offending them. This is legitimate approach to evangelism and has resulted in some salvations. Nevertheless, there are problems. If this is used as the only approach to evangelism, then a lot of people who are not interested in church are never going to hear the Gospel. Secondly, if the Gospel message itself is softened to avoid offending non-Christians, then the problems mentioned previously arise. But now Post-modernism and the Emergent Church have taken another step away from traditional evangelism. They advocate instead ‘conversation and dialogue’. In other words, they talk to people to try to find common points of agreement and understanding and hopefully some might convert. Christianity is presented as an alternative lifestyle – another ‘choice’. Thus the presentation of the Gospel is progressively weakened by the approach used. Traditional Christianity presents Jesus as ‘The Way’, ‘The Truth’ and ‘The Life’. Post-modernism presents Jesus as ‘A Way’, ‘A Truth, and ‘A Life’. The difference is major! No more demand for repentance from the sin of rebellion against God; just a conversation about personal religious beliefs.

People are scared to ‘offend’
Thirdly, Post-modernists don’t see an automatic right and duty to preach the Gospel to all creation (Matt 28). Rather, they believe one has to ‘earn’ the right to present the Gospel to someone without offending them by first doing good works and building relationships to present a good image of Christianity and avoid offending them. There is nothing wrong with doing good and building relationships to help win people, but if we have to first ‘earn’ our credibility in these ways, then will we ever have done enough to earn the right to speak? The result is that Christians are timid and afraid to present the Gospel because, like trying to earn God’s approval, we are always insecure. No! We tell people the Gospel for their good because the Lord commanded us to. He has given us authority to do so – we do not need to earn it or get anyone else’s permission.

The Emerging Church is misguided
Fourthly, Post-modernism is affecting Christians’ attitudes towards other Christians being persecuted for preaching the Gospel. Since they are themselves unwilling to suffer for their faith or even present the Gospel to their close friends, they find it hard to understand why Christians are willing to endure jail and torture in closed countries for breaking the law to preach the Gospel. Fifthly, Post-modernism has changed the way that unconverted people interpret the Gospel in Post-modern countries such as North America, Europe and South Africa. When Modernism was popular, people generally derided the Gospel as ‘unscientific’ or ‘backward’ and did not want to hear it. With Post-modernism, they are quite happy to listen, but re-interpret the Gospel through a post-modern lens. They view the presentation of the Gospel as just an account of someone’s personal preference and experiences – not a challenge to repent of sin against a Holy God. Therefore, we have to emphasise and repeat those aspects of the Gospel which are politically incorrect – that it is the absolute and the only Truth. Sadly, I believe that much media presentation of the Gospel is wrongly interpreted by readers.

A dangerous ideology to be refuted
As with any culture, there are ways we can adapt to reach post-modern youth, without compromising the Gospel. We can use people’s testimonies, emphasise relationships, feelings, community and social concern, and cautiously experiment with new service formats. But the core Gospel must not be modified or marginalised. Modernist liberalism, which emphasised rational thought and anti-supernaturalism, gutted the missions efforts of the mainline Protestant churches in the 1920’s and 30’s. Postmodernism and the Emergent Church threaten to do the same to modern missions. Therefore, as part of the task of world evangelism and missions, the ideology of Postmodernism and the Emergent Church must be fought and defeated at home.

Philip Rosenthal is the director of ChristianView Network, an organisation promoting Christian values in society. For more information see: www.christianview.org or email: mail@christianview.org