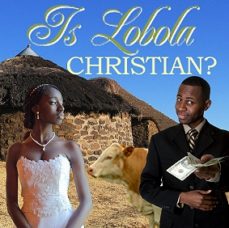 In South Africa, and Africa in general, in the black African community – negotiated monetary payment for a bride, is still the norm even in so called Christian society. As Christians we have to turn to the Word of God to determine whether this practice is Biblical.

What is Lobola?
Nowhere in the Bible, and in particular the first five books, do we ever find mention of the Israelites being commanded by God to pay a bride price. There are only two instances in Scripture and they occur before the Law was given, and even within these instances they are never specifically stated to be a customary bride price.  In Genesis 24 a nose ring and bracelets of gold and silver were given to Rebekah by Abraham’s servant so that Rebekah could become Isaac’s wife. Contextually, the giving of these gold and silver ornaments for Isaac’s wife was more along the lines of a diplomatic gift, rather than a bride price.

Biblical examples
In Genesis 29, Jacob had to work for Laban the father of Rachel for 14 years before he could marry her. Laban though, in the Biblical context seems a selfish and greedy man, whose conduct is not one to be followed, especially in his deceitful dealings with Jacob concerning his two daughters.

These payments from Jacob at best, were to impress or appease man. In contrast, in Genesis 2, the first wife that man ever received was from God when the Lord formed Eve for Adam and brought her to him.   The Lord did not demand payment for Eve but gave her to Adam freely.  The conclusion we can draw from this is that the Lord gives freely and lovingly of His blessings but man is corrupt in his  dealings with others.  Compare Psalm 145 with Psalm 94. In South Africa, particularly in the black African Christian communities, negotiated bride prices are lengthy and tedious. In some cases these negotiations place great strain on the marriage couple.

The essence of Lobola
In most cases the interests of parties that have little bearing on the marriage couple are taken into account (such as those of remote uncles and aunts). Not to mention the interference of ancestral spirits where these practices are mixed with Christian doctrine in the traditional African churches.  In some cases during the traditional lobola ceremonies for marriage, passwords and codes are given to the bridegroom’s negotiating party to gain access to the bride’s homestead. Often ancestral spirits are called on to bless the marriage and then a few days or weeks later the couple undergoes a ‘white Christian wedding’ with New Testament marriage vows in a church before God and the pastor.

The primary reason for dowry or bride price as presented by the elders in African society is to ‘harmoniously’ join the two families but what if no-one in either the bride or groom’s family beside the marriage couple are Christian? What communion has the light of Christ with the darkness of the traditional African ancestral religions? Especially if they are bound together artificially by money and not by the love of Christ (2 Corinthians 6:14-16). Nowhere in the New Testament is a bride price mentioned in connection with marriage.

God is consistent in His Word and that under the New Testament Covenant there is even less support for a bride price than in the Old Testament.

Do away with Lobola
This bride price issue can often cause contention and division within a church, and therefore in an effort to maintain unity should be done away with among our brothers and sisters in the Christian community. The context and the covenant of the Christian marriage are vastly different from a worldly marriage. We need to determine if the whole system of Lobola undermines the Biblical principles of marriage. From the evidence above, it seems this is the case.

Marriage blessed by God
From personal experience, I give the following advice to our beloved Christian brothers and sisters who will be participating in a lobola ceremony prior to their marriage in church before God and their pastor:
The lobola negotiations, ceremony and bride price is best avoided altogether but if this is not possible then I would advise to get married before God in a church first before any traditional ceremonies. This will ensure that your marriage is blessed by God before participating in any ceremony that may contain elements or procedures that are offensive to the Lord. If a traditional ceremony can’t be avoided then examine the procedure beforehand to determine whether there are any aspects of the ceremony that are unScriptural and remove these procedures from the ceremony.

Some traditional African ceremonies can be really beautiful with bright traditional clothes, beautiful singing and dancing but all of this can be done at the church service in honour of God; only one church service and ceremony is required to please the Lord. This article is not intended to condemn our Christian brothers and sisters who have already been married through traditional ceremonies with lobola being paid.

Instead, we encourage these couples to remember the difficulties they may have experienced and help other Christians to avoid marriage practices that are not commanded by the Lord.