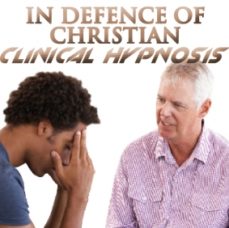 Many a Christian writer has condemned all forms of hypnosis as demonic and/or doorways to the demonic spiritual realm (see JOY! article on ‘Yoga and Hypnosis Open Hidden Spiritual Doors, Nov Issue). This article seeks to offer a counter argument based on Scripture, science and rationality.
I agree with most Christian theologians that things such as New Age healing methodologies and Eastern Spirituality, including transcendental meditation are demonic. However, many Christian writers have made some negative declarations without much thought or Biblical backing; for example declaring that hypnosis is: “mystical and spiritual.” This simply is not true – hypnosis is a natural phenomena…
Everyone on this planet is actually under hypnosis at least twice a day. Being under hypnosis is simply an alpha brainwave state, which can be measured with an electroencephalography (EEG) machine.
There are four natural levels of cognitive arousal, which all people experience throughout the day and night. The alpha brain-state is one of them, found on the continuum of arousal whereby a person is not quite awake and not fully asleep. You are mostly in this state just before waking up in the morning and just before falling asleep at night. You can also go into the alpha brainwave state, while day dreaming, at the movies, while driving long distances on the road and even at church!

Hypnosis in nature
Hypnosis is also found in nature, sometimes for survival, reproduction, or to just get a meal. Consider the common Cuttlefish: it hypnotises its prey (with stunning light displays) to subdue it. If all hypnotists are new age mystics headed for judgement and hell, then there must be many Cuttlefish going in that direction as well!
God, being the author of the mind, gave man the capacity for hypnosis even before The Fall. “So the Lord God caused the man to fall into a deep sleep and while he was sleeping, He took one of the man’s ribs and closed up the place with flesh.” Gen 2:21.

Hypnosis is natural…
Even Peter was in a trance. “He (Peter) became hungry and wanted something to eat, and while the meal was being prepared, he fell into a trance:” Paul too was put into a trance, “When I returned to Jerusalem and was praying at the temple, I fell into a trance and saw the Lord speaking.” Acts 22:17.
Some writers have erroneously equated a, ‘charmer’ in the Bible, to a ‘hypno­therapist.’ Charming refers to making spells and blessing or cursing objects or people (binding them) and sometimes the word is associated with speaking to the dead. The spirit behind charming and witchcraft is the Jezebel spirit. Hypnosis is natural and neutral (it can be used for good or evil) and it is not forbidden in the Word.

Beware of satan’s versions
I have seen people being ‘slain in the spirit’ in both mainline and Pentecostal churches. What is going on here? Who is putting the people to sleep? Who is doing the therapeutic work? And most importantly, why do you have to be ‘open’ to it like you have to be ‘open’ in order to be hypnotised? When true long-term emotional healing happens as a result of supernatural sleep, I believe the greatest hypnotherapist in the universe has been at work: the Holy Spirit, the Counsellor of counsellors.
Hypnosis, like sex, has been made by God, however satan has perverted this with his demonic alternatives. Shall the Church ban music and candles, because they are also used by satanists? Shall I stop cooking chicken chow-mien (Chinese food) and curry because they originate from Buddhists and Hindu countries?

Myths about  hypnosis:
• “Under hypnosis someone can put (and make you act upon) suggestions into your mind that you do not want”.  False: Nothing in this world can turn off your conscience (your knowledge of right and wrong). Only you cauterise your own conscience
• “Hypnosis, like Eastern meditation, requires you to completely clear your mind, opening a door to the demonic.” False: hypnosis turns down the voice of your conscious mind and helps you to access your sub-conscious mind, which is found in the more powerful right hemisphere of your brain. Your conscious mind is always present during a hypnotherapy session and more importantly your conscience is always there too
• “Hypnosis is the same as Eastern meditation, magic, charming, martial arts, yoga, channelling, etc”. False: It is reductionist to generalise completely different things and give them negative labels unless you really know your topic
• “Hypnosis comes from the Eastern religions.” False: it has always been in man’s capacity to be hypnotised. Even if in some form it is present in these religions, you can separate some Eastern practices from Eastern spirituality.

Hypnosis can be used for evil
Can hypnosis be misused or even used for evil as some suggest? The answer is: “Of course.” All our gifts from God can be tainted, misused and even exploited for pure evil. Sex is neutral and is a sacred gift from God, to be enjoyed by a husband and his wife. However, it can obviously be abused and perverted. Unfortunately alternative New Age healers have hijacked clinical hypnosis from the professionals (psychologists and psychiatrists) who should be the only ones to use it.
The pattern with demonic healing is that the devil may heal you, but in time you, the practitioner, or even your children will pay the price. With professional clinical hypnosis, there are never any negative consequences for the practitioner or the patient.  You know treatments in the same way you know people: by their fruits.
That being said the following applications of hypnosis are not acceptable:
• Amateur, stage and street hypnosis. (Besides, it’s fake)
• New Age Past-Life Regression Hypnosis (very evil).

Who is the best type of hypnotherapist?
• Someone who is a Christian Psychologist or Psychiatrist, with training in hypno­therapy, who pleads the Blood of Jesus over the sessions and asks the Father to bring the mind of the hypnotist and patient (both conscious and sub-conscious) into total obedience to the Holy Spirit
• One who practices Christian Medical Hypnoanalysis
• One who truly believes and confesses that Jesus Christ is Lord and the only way to God.
Sometimes Christians persecute their own brothers and sisters! Just because you do not understand something, do not label it as ‘demonic’ or a ‘spiritual door’. 

By: James B Munnik Jr (MA Psych) is a second generation Christian mental health professional.  For a free copy of his full article, email him at: jamesmunnik@gmail.com

NOTE FROM JOY! MAGAZINE
JOY! Magazine seeks to educate and equip Christians with a Biblical worldview. We also serve as a platform for debate and discussion on contentious (and sometimes confusing) issues. We encourage Christians to engage in helpful dialogue and Bible study that will lead to a Scriptural understanding of the matter at hand.
Having published an article on the spiritual doors that Yoga and Hypnosis open, we also acknowledge that some Christians hold a different view. Let us know your thoughts on this controversial subject. Email jackie@joymag.co.za