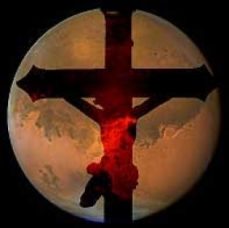 How Great is Our God

“In the beginning God created the Heavens and the Earth.” Gen 1:1

The heavens are proclaiming the glory of God, and the expanse declares the work of His hands.  Night after night the stars remind us of just how small we are and how huge God is.  Looking out into the far reaches of the universe, we find a seemingly infinite expanse of mystery and wonder, intricately fashioned by God of unfathomable size and power.
Just a glimpse at one of the billions of visible galaxies He has formed, resizes us.  It shrinks us, and this world we call home, to seeming insignificance in an instant.  But, as tiny as we may seem, the God who knows every star by name also knows you.  And, in the most stunning rescue imaginable, God sent His Son to this spinning planet we call home.  The Creator is reconnecting us to Himself with the life that never ends through Christ and His Sacrifice on the cross.  We need only look at God’s universe to discover something of the amazing magnitude of His greatness and His grace.

God breathed the stars into being.  We need to take a glance up into the universe to recognise what a great and majestic, unrivalled and incomparable God we worship.
Sin seeks to shrink God and puff ourselves up.  The universe God made shows us what tiny and frail creatures we are.  Yet, we are fearfully and wonderfully made, fashioned and formed by the Creator of the universe Himself.
Just consider how each of us is a product of a single cell from our father, and a single cell from our mother, which united to form a completely new and unique individual.
Twenty-three chromosones from the mother and twenty-three chromosones from the father, united to form a unique cell, with a three-billion character description in your DNA.  Each cell in your body has its DNA code – encoded in the language of God.  If the DNA of one cell was stretched out it would be six feet long.  In that DNA there’s so much information that, if it was read out, one character a second, every moment of every day.

It would take 96 years just to read your DNA code in a single cell!

Consider also that, at conception, the single cell of 46 chromosomes then sets out to build the model which now makes up the 75 trillion cells in your body.
There is enough DNA code in your body to go to the moon and back – 178,000 times!  And your cells are constantly renewing and replacing themselves.  At five months after conception, while still in the womb, a million optic nerve cells are stretched out to match up with their exact partner, out of a million other optic nerve endings, to make possible the  miracle of sight.  The most technically advanced thing in the world is the eye.  At six months, a precision cutting device opened up the skin over your eyes, creating the eyelids, so that you could see.
The Scriptures tell us that the God of the Heavens fashioned you together.  He spoke and it came into being.  Augustine wrote that men go abroad to wonder at the mountains, the waves, the rivers and the stars, but they pass themselves by and they don’t even notice.
Our God is a universe maker and He can hold you together.
You may ask: Does God see?  Does He care?  Can He do something to help me?
Consider the little protein molecule in your bodies.  Laminin is a cell adhesion molecule.  It is the glue of the human body, the structural steel that holds the buildings together.  Laminin holds our bodies together.
If you consult a molecular biology textbook you will see that Laminin is a cross-shaped molecular structure.  It is this cross-shaped protein molecule that holds everything in our body together.
“He is the image of the invisible God, the firstborn over all creation.  For by Him all things were created: things in Heaven and on earth, visible and invisible, whether thrones or powers or rulers or authorities; all things were created by Him and for Him.  He is before all things, and in Him all things hold together.” Col 1:15-17
The supremacy and sufficiency of Christ is attested to by the millions of microscopic crosses holding you together. The Star Breather became the Sin Bearer.  The Universe Maker is the Saviour.
“To whom, then, will you compare God?…Do you not know?  Have you not heard?  Has it not been told you from the beginning?  Have you not understood since the earth was founded?…He stretches out the heavens like a canopy, and spreads them out like a tent to live in…Lift your eyes and look to the heavens.  Who created all these?  He who brings out the starry host one by one, and calls them each by name.  Because of His great power and mighty strength, not one of them is missing…Do you not know?  Have you not heard?  The Lord is the everlasting God, the Creator of the ends of the earth.  He will not grow tired or weary, and His understanding no one can fathom.  He gives strength to the weary and increases the power of the weak…Those who hope in the Lord will renew their strength.  They will soar on wings like eagles; they will run and not grow weary, they will walk and not faint.”  Isa 40:18-31
Your life is a miracle and the Creator of the universe knows you by name.  He is big enough to breathe out stars so huge that we cannot even begin to comprehend them.  Yet, God is intricate enough to fashion together the trillions of cells that make up every facet of who you are.
The God who spoke the universe into existence made you, too.  He knows everything about you –  from the smallest molecule to the situation you find yourself in right now.  He is aware of your circumstances and intimately acquainted with everything that you do.  He cares about you and He promises to carry you through.
From the cosmos to the cross we can find hope in the midst of the darkest situations in life.  Though our journey may have been complicated and painful, filled with confusion and chaos, but at the cross of Christ, God promises to preserve and restore you.  He is the One who is holding on to you and holding you together. He gives strength to those who trust in His unfailing love.  He is the everlasting God!  How great is our God! This message is based upon Louie Giglio’s presentation: How Great Is Our God.  Louie Giglio is the Director of Passion Conferences.  His stated goal is to know God intimately and to glorify Him in all things.