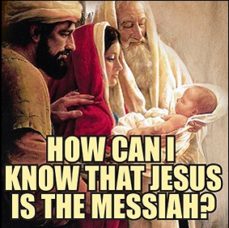 How Can I Know that Jesus is the Messiah?
There is nothing wrong with being cautious and careful when it comes to eternal matters. Indeed there is much in the world that we should be skeptical about. We should not be gullible. There is far too much superstition and ignorance in the world. We should carefully investigate and establish what the facts are; we need to have the courage to face the facts. Christianity does not require one to make a blind leap into the dark – false religions require blind faith. Christianity is an intelligent step into the light.

The absence and fulfilment of prophecies
Of the 26 books of the world that claim to be some kind of holy book, specific prophecies concerning the future are glaringly absent. You will not find specific, predictive prophecy in the writings of Buddha, Lao-Tzu, Confucius or Muhammad. The reason for the lack of prophecies is that they require supernatural ability.

The Bible is a unique book in every way. From the Old Testament alone, more than 2000 specific prophecies have already been fulfilled. Most of the 333 prophecies concerning the Messiah were fulfilled in the First Coming of Jesus Christ. The others will be fulfilled at His Second Coming.

Identifying the Messiah
Some years ago, when I was conducting outreaches in Hillbrow, I had a conversation with two Jewish people who claimed that they were waiting for the promised Messiah. I read to them from Isaiah 53 and Psalm 22. Then I asked them who they understood these passages to be referring to. Both agreed that obviously these Scriptures were talking about Jesus of Nazareth. However, one added, “But, that’s from your New Testament!”

“No”, I pointed out to them. “The two passages that I read to you are from your Bible, The Old Testament. Psalm 22 was written by King David a thousand years before the birth of Christ. Isaiah 53 was written by the prophet Isaiah some six hundred years before the time of Christ.” They were shocked. I handed them the Bible so that they could read for themselves and urged them to go back home and look in their own Scriptures to see that this was so.

There are 333 passages of the Old Testament that make predictions about the Messiah. 451 details are given in these passages. They were all fulfilled in Jesus of Nazareth.

How to identify a false prophet
The Law of God revealed through the prophet Moses declared: “When a prophet speaks in the Name of the Lord if the thing does not happen or come to pass, that is the thing that the Lord has not spoken; the prophet has spoken it presumptuously, you shall not be afraid of him.” Deut 18:22

The incomplete Old Testament
The Old Testament Scriptures are the Word of God. However, they were incomplete. The Old Covenant speaks of a King from the line of David, whose Kingdom would never end. It spoke of all the families of the nations of the earth being blessed by the Seed of Abraham. It spoke of a Prophet like Moses, arising from among the people, whose teaching would be unparalleled. It spoke of a Servant of the Lord, whose death would atone for the sins of His people. Of One who would make a New Covenant between God and men.

One who would put the Spirit of the Lord into the hearts of men, so that they could know God personally and have their sins wiped out. It spoke of a Stone, despised by the builders, which would become the chief Cornerstone. It spoke of One like the Son of Man who would receive authority, honour and royal power so that the people of all nations, races and languages would serve Him.

It spoke of a Priest of the order of Melchizedek whom the Almighty would call Lord and welcome to His throne. It spoke of a coming Messiah who would be born of the tribe of Judah, from David’s line, in Bethlehem. He would be despised and rejected by the very people He came to deliver. He would die among wicked men and His tomb would be supplied by a rich man. Yet He would live again, forever, and the Lord’s purpose would succeed through Him. All of this was fulfilled by Jesus! Not some of it. Not much of it. All of it! Prophecies made by many prophets over a thousand years and more were all fulfilled in One historical Person.

After He had risen from the dead, Jesus appeared to some of His followers on the road to Emmaus “and beginning at Moses and all the prophets He expounded to them…the things concerning Himself.” Luke 24:27

To His disciples Jesus explained: “These are the Words which I spoke to you while I was still with you, that all things must be fulfilled which were written in the Law of Moses and the prophets and the Psalms concerning Me.” Luke 24:44. Again and again in the Scriptures we read of how Jesus fulfilled the Old Testament prophecies. “But all this was done that the Scriptures of the prophets might be fulfilled.” Matt 26:56

“You search the Scriptures, for in them you think you have eternal life; and these are they which testify of Me…if you believed Moses, you would believe Me; for he wrote about Me…” John 5:39-47

Jesus began His public ministry by reading a Messianic prophecy from the book of Isaiah and declaring: “Today this Scripture is fulfilled in your hearing.” Luke 4:21

In the book of Acts we read that the Apostles taught that Jesus Christ fulfilled the Messianic prophecies of the Old Testament. “But those things that God foretold by the mouth of all His prophets, that the Christ would suffer, He has thus fulfilled.” Acts 3:18 “To Him all the prophets witness…” Acts 10:43

Old Testament prophecies fulfilled in Jesus
So, what are some of the Messianic prophecies fulfilled in the earthly ministry of Jesus of Nazareth? After the fall of Adam and Eve into sin, God promised a Redeemer, born of the seed of woman, who would suffer but He would defeat satan (Gen 3:15; Gal 4:4; Matt 1:21). The Messiah was to be born of a virgin (Is 7:14; Matt 1:23). The Messiah shall be a descendant of Abraham (Gen 12:2-3; 22:18; Matt 1:1). It is most significant that Jesus is called the Son of Abraham, as He was called to the altar of the Cross.

He is also called the Son of David, because He is destined to the Crown and the throne. The first time He came as the Lamb of God, a sacrifice. God Himself has provided the Lamb: “Behold the Lamb of God who takes away the sins of the world.” The second time He comes, He will come not as the suffering Servant, the sacrificial Lamb, but as the Lion of the tribe of Judah, King of kings and Lord of lords.

So, these prophecies tell us that the Messiah would be born of a virgin, from the line of Abraham, descended from Isaac (not Ishmael), from Jacob (not Esau), from the tribe of Judah (eliminating 11/12th of the tribes of Israel as possibilities), from the family of Jesse, and from the house of King David. Then the prophecies became even more specific as to where the Messiah will be born.

The finest details completed
The Messiah would be born at Bethlehem (Micah 5:2; Matt 2:1). In Matthew 2:6 the scribes informed King Herod with great assurance that the Messiah would be born in Bethlehem. It was only fitting that Bethlehem, meaning the house of bread, should be the birthplace of the One who is the Bread of Life.
Other Messianic prophecies included that: He shall be called Lord (Psalm 110:1; Luke 2:11; Matt 22:43-45); and He would be a Prophet (Deut 18:18; Matt 21:11).

It can be noted that Christ and Moses were both delivered from a violent death in their infancy, both exercised control over the sea, both fed multitudes of people miraculously, both mediated between Jehovah and Israel and made intercession on behalf of sinful people. “For the Law was given through Moses, but Grace and Truth came through Jesus Christ.” John 1:17

The facts confirm what we know

Jesus is Emmanuel, the Son of God, the Lion of the tribe of Judah, Prophet, Priest and King, eternal Judge. He made the blind see, the deaf to hear, the lame to walk. He healed the sick and raised the dead. He was mocked and crucified. Yet He ascended into Heaven. He will come again to judge the living and the dead.