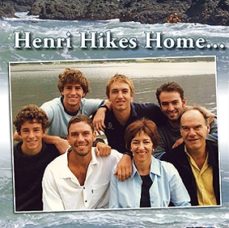 The fourth of June was a Saturday like any other. Rugby at Andrew’s school. A potjie simmering on the stove. Children on the go. It was one of those brilliant, clear winter days. Table Mountain darkly etched against the true-blue sky. Snow-white clouds watching over the city, motionless. Windless trees. A perfect day for diving in the calm waters of Miller’s Point.
At six o’ clock we received a phone call from Piet van Niekerk, Henri’s diving partner. It was a phone call that changed our lives irrevocably: Henri had been attacked by a shark. The NSRI had been searching for him since four ‘o clock. I knew – our middle child had died …

Nowhere to be found
Henri’s zest for life was still everywhere around us after his departure: his wet shirt in the Uno, the papers in his waste-paper basket, the food scraps in his hostel fridge. Behind his bedroom door his white hospital coat with stethoscope and notes that he had made on his ward rounds that morning. Henri was still tangibly present in everything surrounding us.
It was he who had put the empty plate in the sink before he went diving. It was he who had left the wet towel on the bathroom floor. How then could Henri be dead if there were still signs that he had been  busy with something shortly before?
Was Henri’s death a mistake? Was it a blunder that he was specifically at that place, on that day, where so many other scuba divers safely complete their training? Was it a slip-up that during his dive, there was a shark at that place, with the whole wide ocean around?
Did God momentarily look the other way? No, our God is not a God of mistakes. No matter how heavily we are burdened by Henri being torn away, there are too many things that affirm that his days on earth were measured and complete…

A heavenly homecoming
Amongst Henri’s belongings I found a photo of him walking across a wooden bridge, his back to the camera. Barefoot. Carefree. His backpack casually hooked over his shoulders. Looking at the picture I realised that Henri had in fact walked across another such bridge and into Eternity. Henri hiked home. He would never again cross our threshold – what this would mean for those of us who stayed behind, I could not know.
The only thing I did know and still believe is that God does not allow anything to slip out of His hand. He allowed Henri to come home early in life. Thinking of logical reasons, or questioning God’s will, only leaves one confused and exhausted.  I needn’t ask anything. God understands when (even today) I sit with Him and lament in wordless distress. He understands when I call out, ‘Oh, Lord!’

Grieving at God’s feet
In our Western society we are not equipped to cope with the things that would slow us down in the global race to be better, faster and superior – death being the top speed breaker, especially when it concerns a child. Although it is a personal process, I believe that there are many common factors for those who grieve.
Those who mourn are often not sure how to, while those who comfort may lack the understanding and ability to offer consolation. Through my book, ‘Henri Hikes Home’, I sincerely wish to share with others what I have learnt while grieving at the Lord’s feet.

What I have learnt
I learnt to be honest with myself about my feelings, and not to clutch my sorrow in my hand, but to open up and allow my pain to breathe in order for me to pass it – and the hope that accompanies it – on.
God can use anything in our lives to His glory, even tremendous heartache. I have learnt to embrace my brokenness. Of course I do not wish for Henri to be dead, but through his death I am able to fling open my door and invite others in so that they can feel sheltered and welcome.

Finding comfort in His presence
Many things happen in your heart and soul when you’re grieving. This is why it is an active process of spiritual moulding. In the morning when the house quietens down, I withdraw. In our bedroom the winter sun casts a warm, yellow patch on the carpet, I see myself like that before God – a small heap of potshards – in the soft patch of sunlight.
I have nothing to offer Him. I merely sit in His presence as He fills me with His grace. He doesn’t give answers or an instant course in mourning. I simply experience the soothing solace of just sitting like this. Gradually I begin to understand Jesus’ words: “Blessed are those who mourn, for they will be comforted.”
Henri hikes home is not only the story of  Henri’s life and death.  It is the story of our family which remained whole in the presence of abundant love, despite our brokenness. It is a story of hope for everyone with immense sorrow; for everyone who carries a heavy burden of loss. And, it is a song of praise to the God of life who never forsakes His children. 
To order call Lizette: 073 728 2075
Or see: www.lizettemurray.co.za