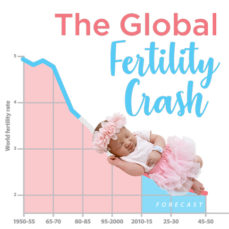 A recent BBC headline claimed the world is facing a “jaw-dropping” global crash. Not an economic crash, mind you, but a crash in the birthrate. Citing a new study by University of Washington, the BBC article claims that “Falling fertility rates mean nearly every country could have shrinking populations by the end of the century.” In fact, 23 countries, including Spain, Portugal, Japan, and South Korea, could see their populations cut in half by 2100.

Christians should always encourage those government policies that make it easier for couples to “choose life,” but we also need to help people think more clearly about the whole issue. We have to debunk the over-population myth that should have died decades ago.