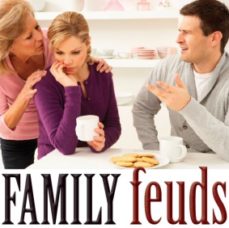 Fighting within families is nearly as old as time itself. Soon after the creation of the world we find the first-born earthling killing the second-born earthling over some perceived slight. Incidentally, Abel was wholly unaware that he had offended his brother Cain to warrant a cold-blooded murder. It nearly seems as if this incident set a precedent for the future of mankind.

God and man
Perhaps it would do us well to consider the nature and purpose of a family, and then from there see what we can do to preserve this precious unit. Essentially God, who is love, created humans because He longed for relationship. The very nature of love requires that we have to love, and also be loved in return. This reciprocal exchange forms the basis of all relationships, and in the mind of God, sealed the purpose and function for His creation.
We read in Genesis that this perfect relationship lasted for a while, where the Lord is found to walk in the cool of the day with Adam and Eve. However, we are soon introduced to satan, who is pathologically jealous of the relationship between God and man, and we also see how cunningly he puts a wedge between the Lord and the crown of His creation.

A history of hatred
The plan of God was that man was to multiply, increase, be fruitful, and to be the ranking authority over all the creatures on earth; the earth still belongs to God! In essence man was to rule, subdue and reign on earth as a steward of His property, and to help him in this task he could rely on his family. But that prideful fallen angel is still at work to bring about disunity and to dismantle as best he can the family unit of God’s intention. The history of mankind is filled with stories of family feuds, and leaves in its wake hate, bitterness, unforgiveness and death – this is far removed from the original blueprint for mankind. Writers and film-makers have immortalised many tales that at its core have family fighting as the theme.

Satan brings destruction
God’s idea of family gets a renewed focus in the New Testament, where believers are again encouraged to call Him Abba Father, and where they are referred to as children of God. The family unit again became the focus and purpose behind mankind’s existence. Yet, still the enemy of mankind schemes to break up the unity upon which God commands a blessing. In most cases the basis for disunity in many families is small and insignificant issues, which through pride and the refusal to forgive, soon blossom into a full-scale storm of anger, strife and hate.

Disunity in the Church
The New Testament Church is also likened to a family, all being brothers and sisters in Christ. It is rather sad that within this family there seem to be constant and persistent fights that bring dishonour to the Father. One hears about congregations that are openly hostile to one another, denominations that will not tolerate those with a different view, and ministers publically attacking their brothers for insignificant issues.
Often ministers are ruled by them striving after numbers (members of their church family), boasting about the financial income they are able to generate, or even about the impact they have in the local community. The World Christian Encyclopaedia cites 33 000+ total ‘Christian’ denominations. I do not decry denominations per se, however, when one considers that a denomination is basically defined by its doctrine (set of beliefs and interpretation of Scripture), and that many denominations were birthed through a church split (family feud), it does put a damper on the celebration. Now, what is true for congregations (of all denominations), is also true of other Christian organisation and companies, and one is constantly exposed to stories of feuding in the media. Ultimately I am decrying the dishonour within our Christian family, not only towards one another, but also towards our Father.
I often wonder how it was possible for 33 000 separate belief systems to have been birthed out of one Cross, one Death and one Commission, and all this over a mere 2015 years! Imagine the impact of a ‘single family’, with a singular vision and purpose, on a society! Imagine the significant contribution this family would be able to make in the lives of people! Imagine a family united in love, with no in-fighting, grudges or offenses, but with a single focus of sharing that love! If we are able to imagine this, then nothing we can imagine will be able to predict the response from God!

Tell the world about His love
It is time that the family of God place focus on what really matters: tell the world about His love. In love there is no disunity, hate or striving, but everything opposite to this and more!
So, are you ready to look at your own life and opinions, and restore those relationships that have suffered either consciously or unconsciously? Are you ready to forego your perceptions for the sake of focussing on simply loving God and others? Are you ready to decree that the greatest thing in life is to love and be loved in return? 