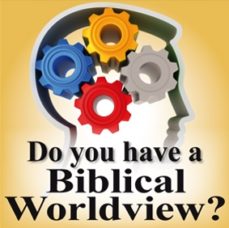 Do You Have a Biblical Worldview?
A recent survey by the Barna Research Group discovered that only 9% of Christians in America have a Biblical worldview. Further to that Barna found:
– 38% of these adults believe the whole Bible, including the Old Testament, was written decades after Jesus’ death. (Much was in fact written centuries earlier)
– 38% didn’t know that Isaiah was in the Old Testament
– 49% believe the Bible teaches that money is the root of all evil. (It says the love of money is root of all evil, in 1 Timothy 6:10)
– 12% believe that Joan of Arc is Noah’s wife (must be the ark/Arc connection!)
– Only 9% of born-again Christians have a Biblical worldview.

Now whilst we may laugh at these statistics, sadly similar figures can be reflected in South Africa – even amongst the most ardent church goers. Why is it that Christians (who supposedly live by their faith) seem to know so little about their very belief system? Upon closer inspection, there are three predominant reasons for this inconsistency. Firstly, because too many Christians are saved in their hearts, but not in their heads,  (ie: they haven’t renewed their minds – Rom 12 – and thus are not interested in learning about the fundamentals of their faith).

The second reason is because for many years there has been a startling lack of comprehensive, easy to understand teaching on key issues like: worldviews, apologetics and foundational doctrine.

Different influencers
A third significant reason for consideration is the widespread discrepancy within the Body of Christ over key issues such as: should a Christian vote for a Christian party; should you speak out against blasphemy in the media, etc. Hence depending what authors you read/church you attend, your worldview may differ from that of a fellow believer who has received slightly different teaching.

Why is a worldview important?
When one talks about worldviews, the temptation is to ‘switch off’ and dismiss it as irrelevant philosophical jargon. The reality however, is that your worldview (which is the framework, attitudes, beliefs and set of ideas through which you order your world) is the cornerstone of who you are and how you relate to God and to others.

Our worldview tells us what is real, what is important, what is right, and what is wrong. Thus it comes as no surprise that Barna found those with a Biblical worldview live according to a much higher moral standard than those without such a worldview. In the past decade many Christians have rallied around the slogan, “What would Jesus do?” This is a fine question to ask. Unfortunately, it can’t really be answered effectively by people who don’t share Jesus’ worldview.George Barna explains: “If Jesus Christ came to this planet as a model of how we ought to live, then our goal should be to act like Jesus. Sadly, few people consistently demonstrate the love, obedience and priorities of Jesus. The primary reason that people do not act like Jesus, is because they do not think like Jesus.”

What’s a Biblical worldview?
A Biblical worldview is based on the infallible Word of God. When you believe the Bible is entirely true, then you allow it to be the foundation of everything you say and do. That means, for instance, you take seriously the mandate in Romans 13 to honour the governing authorities by researching the candidates and issues, making voting a priority. Christians who do not use Biblical guidelines and principles when casting their vote thus do not have a Biblical perspective or worldview in this area. Worryingly, nonbiblical ideas can easily be integrated into our thinking without us being aware of their influence. We are constantly bombarded with secular humanist ideas through TV, film, radio, advertising, newspapers, books and academia. Because we live in a selfish, fallen world, these ideas seductively appeal to the desires of our flesh. It is a constant battle and one that Christians must actively engage in.

If we capture and embrace more of God’s worldview and trust it with unwavering faith, then we begin to make the right decisions and form the appropriate responses to questions on abortion, same-sex marriage, cloning and even media choices. Ultimately, it is our decisions and actions that reveal what we really believe.

How does having a Biblical worldview affect me practically?
We know that every human will give account for their acceptance of Christ as Saviour (and inherit eternal life) or their rejection of Him as Saviour (and face eternal damnation).

Similarly, every Christian will account for their good deeds either done in faith and obedience to Christ, or done out of selfish ambition (which are like filthy rags). God has given each of us a ministry mandate to spread the Gospel and to further His Kingdom on earth. You cannot effectively outwork God’s purposes for your life, or His Will on earth without a Biblical worldview.