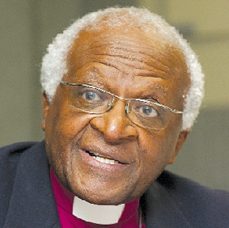 Christians in South Africa are reeling at comments made recently by Archbishop Desmond Tutu*. Tutu was the guest speaker at the Alliance of Civilisations awards ceremony, in conjunction with the University of the Western Cape and University of Cape Town in October. In front of an international audience, Tutu claimed that God will not turn away good people from entering the Kingdom of Heaven. “Most of us think God is a Christian, but if you think that God is going to tell the Dalai Lama, ‘You’re a good person, but sorry you’re not a Christian’ then (I say) rubbish!”

Though we at JOY! commend the Archbishop for his social work and all his good deeds over the years, we are highly concerned at his comments. The Bible is clear that Jesus Christ is God’s provision for mankind’s sin, and that it is only through His Blood that we enter the Kingdom of God. John 14: 6 “Jesus answered, ‘I am the Way and the Truth and the Life. No one comes to the Father except through Me.’” No matter what we may think, God’s Word is sovereign and we cannot call ourselves children of God (Christians) if we do not accept the authority of that Word. Tutu further went on to say, “We’ve conveniently forgotten that Christians burnt witches at the stake. It wasn’t pagans responsible for the Nazi genocide – it was

Christians.” (This is completely untrue – the Nazi’s were staunch atheists). He said it had also been claimed that apartheid was supported by the Scriptures and the symbol of the Ku Klux Klan was a cross. Tutu sounded a warning against a simplistic classification of good and bad. We sound a warning – “There is a way that seems right to man, but in the end it leads to destruction.” Prov 14:12 Not everyone who says they are a Christian, is one. By the same token, Tutu who is a leader of the Church and a representative of God, needs to be careful what he says – He will be held accountable for misrepresenting the Truth. Good people don’t go to heaven. Believers do!