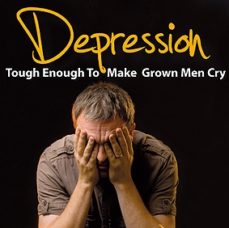 I know a man whom we’ll call Mike, a 48 year-old owner of a small, custom cabinet-making shop. Mike has struggled most of his life with interpersonal relationships, has two failed marriages and no close male friends.
He came to faith as a child when he ‘walked the aisle’ in his grandfather’s church and has secretly dreamed of being a pastor.
However, his angry demeanour makes Mike’s church wary of entrusting him with ministry, much less leadership positions. Over the years he has changed churches several times and even stopped attending for extended periods of time. He complains about being raised in a loveless home with a sometimes brutal father. He distrusts women and, though lonely most of the time, manages to alienate the women who would be attracted to him. His angry, accusatory side emerges as soon as they become semi-serious about him.
He complains about how disappointed he is with his life and often expresses his desire that the Lord would “take me home now.”

admitting  depression
His business is often in financial trouble and he has difficulty focusing on his work. Because of his lonely life, he is often angry at God, accusing Him of not keeping His promises. When I suggested that he might be struggling with a life-long clinical depression and that he might find our counselling times together to be more effective if he took an antidepressant, he angrily protested, “I’m not depressed. I just want to die. Besides, Christians don’t take antidepressants.”
For many years Mike drank heavily, finding companionship in bars. Then, at the age of 40, he decided he was in danger of alcoholism and quit drinking cold turkey. He is now going to an AA group but says, “I’m not an alcoholic. I just like the way those people think.”
the Trail of depression
Mike’s story is not unusual for Christian men with long-standing depression.  Although there are various types of depression with differing details, the general pattern frequently presents: anger, alcohol use, reckless life activities, sleep disorders, difficulty maintaining a marriage or friendships and a deep underlying feeling of failure and uselessness both to God and to mankind.
According to the most carefully conducted survey of American mental disorders, in any given one-year period, 9,7% of the adult population suffers from depressive illness, with women having a rate of 11,6% and men 7,7%. The youngest adult group, ages 16-29, have the highest rate of any age group (12,9%). Over a lifetime, 24,9% of women and 17,5% of men will experience a significant episode of depression. Women are far more likely than men to acknowledge depression, to seek treatment and to attempt suicide, though men are four times more likely to succeed in killing themselves. Christians are no different from unbelievers in either the frequency of depression or their response to it, except that suicide is less likely because of a fear of jeopardising their eternal life in Heaven.

FIGHTING DEPRESSION  WITH YOUR BODY, MIND & SPIRIT
To effectively treat depression we must tackle it on every level, physiologically as well as spiritually. You can overcome depression in Christ – He promises you mental health in 2 Timothy 6:7 – but we must address depression comprehensively.

Body
A healthy lifestyle and exercise is critical to defeating depression. Nutritious foods, vitamins and supplements go a long way in improving your state of well-being.  St John’s Wort, has long been regarded as a natural herbal treatment for depression. In some countries, such as Germany, it is commonly prescribed for mild depression, especially in children and adolescents, and where cost is a concern. Standardised extracts are generally available over the counter. However, in some countries (such as Ireland) a prescription is required. Extracts are usually in tablet or capsule form, and also in teabags and tinctures.

mind
This article deals signficantly with the mind and why we must renew our minds and take control of our thought life – the Bible says “As a man thinks in his heart so is he…” so we must confess God’s Word over our circumstances.

spirit
To be fully delivered from a spirit of depression, you need to commit your life to Christ and trust in Him to heal you.


Confronting depression
How is a Christian man to think about his depression, down in his heart of hearts, as he outwardly denies having it? Can he overcome it by will power? By prayer? By counselling? By medication?
As I struggled with my own depression for about four years, from ages 18-21, I didn’t even know that I was depressed. When I came to faith in Christ at age 21, most of the depression left me within weeks. I realised I had been depressed and that there is healing power in the Kingdom of God. But I couldn’t grasp how to minister this discovery to other depressed people, either believers or unbelievers.
I went on through a masters and a doctors degree in psychology and counselling, but still, like all mental health professionals, was profoundly affected and hurt when a patient took his or her life. When teaching at a university, I began to seek a Scriptural understanding of the human personality and its defects. I saw then that everywhere the Bible considers us to have three constantly interacting aspects – body, soul (mind, will, emotions) and spirit. It occurred to me that when something is wrong with us in any one of these areas of life, the other two aspects are also affected. We must consider the consequences of our genetics and body chemistry, our life experiences and our spiritual condition in order to understand ourselves and to work out a response to our defectiveness. In other words, we need a broader understanding of sanctification than we, as Christians, usually have.

Using spiritual warfare to fight your depression
By allowing room in my thinking for medications to confront the biochemical aspect of depression, for counselling with regard to our life experiences, and for a primary focus on our spiritual lives, I began applying this broader approach with both individuals and groups of men and women with depression. I found that about 70% of seriously depressed people achieve some relief from the extremely painful despair by taking antidepressants – deriving just enough relief to make it easier to examine the extremely pessimistic mind-set of depression. For those non-responsive to antidepressants, there are certain life-style changes that can be made to also influence the ‘body’ aspect of depression. But I discovered that the key to significant and lasting victory over depression is spiritual warfare.

stand on the word and seek support FROM OTHERS
My experience taught me that people with depression typically find their minds ruminating on an almost identical theme in the middle of the night when they are plagued by the sleeplessness of depression. It goes something like this: “Everything you try to do ends up in failure. You can’t do anything right. No one likes you, no one wants to be with you, and you are inadequate at nearly everything you set your hand to do. When you pray it seems your prayers bounce off the ceiling, and when you try to read the Bible, your mind quickly wanders. Remember the  Apostle Paul’s words, “For our struggle is not against flesh and blood, but against the rulers, against the authorities, against the powers of this dark world and against the spiritual forces of evil in the Heavenly realms” Eph 6:12. This mindset is the key to winning the battle. Fellowship with the Holy Spirit is also vital to living in victory over your struggles every day.
Satan is devoted to killing, either spiritually or physically, the people for whom Christ died. He is a liar and a thief, but he can be resisted. Go to God’s Word for your encouragement, raise up your shield of faith, confess the Scriptures over your life, renew your mind in Christ and walk with a Christian brother who will pray for you regularly and provide a good laugh.
Remember that you are not alone. There’s a bias that says women get depressed more often than men, but it may just be that men don’t ask for help or realise what’s wrong.
Often with men, there’s more agitation than lethargy. You may have frenetic, restless energy that doesn’t fit with the typical picture of someone in bed with shades down and the sheets up over their head. But the good news is, you can get help, and you have the best Doctor around – after all He made you!
For more information on depression or for help, contact the  South African Depression and Anxiety Group on (011) 262-6396 or emergency 0800 567 567

what to do if your spouse is depressed
When one spouse is depressed, a marriage is depressed. This illness erodes emotional and sexual intimacy and suffuses a relationship with pessimism, resentment, anger and isolation. You may be overwhelmed by extra household chores that your partner is too lethargic to finish, resentful because your spouse won’t just snap out of it, or feel that you’re somehow to blame for the illness itself. You may feel alone yet unwilling to tell anyone there’s depression in your household, or you may simply wonder when the sparkle and joy seeped out of your relationship. The worst thing you can do if your husband is depressed  is nag him about it, or indulge his depression.
The best thing you can do is pray for him constantly, speak God’s promises over his life (obviously in your prayer closest) and deal with him in a loving, encouraging way. If your husband is saved, pray together and play praise and worship music in your house. Praising God always lifts our spirit. If he is unsaved, pray for him and love him unconditionally, trusting God to reach his heart. Rely on friends for support and try where possible to do fun things together.