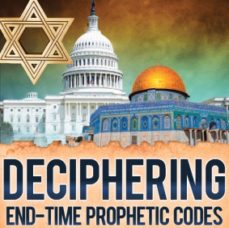 As events unfold rapidly around the world, more Christians are becoming interested in what the Word has to say about the end-times – and how the events in the news fit into a Scriptural context. However, it can be very confusing trying to understand clearly what the Bible is telling us about the times we are rapidly entering. There is a need for teachers who have been given “understanding of the times” in the Body of Christ.

Events flow in patterns
Those  who  follow Perry Stone’s teachings   believe that  he  has  received  advance  warning  of events which unfolded years after he predicted they would occur. He understands that, at times, the future is concealed in past events and these events flow in patterns. In  his  most  prophetic  book  to date, Stone  shares  his  understanding of cyclical  prophetic  codes  in the Bible  and what  this  means  for  believers, regarding  the  future. This dynamic exposé also goes into detail about those repetitive cycles which could be affecting America and its leaders.
As he explains: “The Bible itself has various layers of wisdom and understanding; this had not been taught in my denomination. We were told, ‘There is the plain simple meaning of Scripture, and when the plain sense of the Scripture makes sense, seek no other sense!’ This is the level of casual reading, applying a particular passage to your situation or building faith through the promises of God. This is the main application taught from most pulpits, and Christians learn at this limited level. Most believers are uninterested in digging deeper into the other spiritual and prophetic applications as this requires time, effort, and understanding Hebraic levels of hermeneutics (methods of interpreting the Scriptures).”

Tapping into hidden truth
Initially, Stone encountered criticism when he began to share what the Lord had revealed to him concerning types and shadows hidden in the Scripture, but he was undeterred and continued to dig deeper: “I discovered the Bible is a divinely layered book; too often it is read and not studied. It is viewed as a storybook – a nice story here, an interesting narrative there. However, the words of the Bible are more than ancient stories; they are divinely inspired writings that can have many practical applications. You will discover that some conceal prophetic codes – events from the past whose details will repeat at some point in the future.
To tap into these hidden truths requires knowledge of the Bible in its entirety, historical context and details of parallel events, and an understanding of Biblical prophecies. It demands insight to prophecy predicting the signs and circumstances prior to the return of Christ. One of my most amazing discoveries is how God moves world events in a circular motion. These events are repeated, sometimes hundreds or thousands of years apart, yet using parallel dates, the same names often mirror the same type of event or place.”
It is God Himself who said: “Declaring the end from the beginning, and from ancient times things that are not yet done, saying, My counsel shall stand, and I will do all My pleasure.” Isaiah 46:10.

Wisdom for the future
“That is what this book is about, how the past can repeat in the future – and how what has been is what will be. Through divine wisdom, we can see what is coming, based on what has occurred. It is not a theological thesis on doctrine, but an explanation on how prophetic revelation is continually in motion – not so much in a vertical line as Westerners think, but in a circular pattern. This repetitive cycle, when properly understood, can allow us to imagine the future and at times, predict outcomes before they occur.”

Three  ways  of  counting  time  in  God’s  cosmic  calendar
Visions  and  dreams  concerning  America’s  future  events
Amazing  prophetic  patterns  of  American  presidents  and  world  leaders
America’s  fall and  what  people  need  to  do  to  prepare
Six prophetic warnings of General Booth
How to know when the time of the end has come
The vision of blackbirds and padlocks in Washington
Plans to control your healthcare and your Life
America’s final visitation at the time of the end
Which cycles include personal warning patterns for America’s leaders.

This book certainly makes for interesting reading and is for  anyone  who  seeks understand  end-time  events  and  how  they  are  unfolding. 
Perry Stone director of Voice of Evangelism Ministries. He also hosts Manna-Fest with Perry Stone, a weekly television program. See www.voe.org for more information.