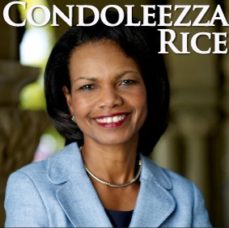 Stanford Professor, National Security Advisor, and 66th US Secretary of State, Condoleezza Rice is no ordinary woman, but then again, she serves no ordinary God. The term ‘Warrior Princess’ was coined during George W. Bush’s term in office where Condoleezza served as National Security Advisor managing foreign policy during not just one, but two, wars raging in Afghanistan and Iraq. No one thought she could do it. A woman? A black woman? She proved the world wrong and jaws dropped as she handled the growing tensions with a cool, calm demeanour.
But what the rest of the world doesn’t know about is the simple, sincere prayers Condoleezza was raising to the throne of our Heavenly Father, for guidance and a solution.
Humble beginnings
Condoleezza was born in 1954 in the South during the heart of American racial turmoil and riots. The movement was fuelled by ‘Jim Crow’ laws which were intended to keep blacks and whites separate in all spheres of society. In the Southern States, hate crimes and violence only added to the growing flame of oppression as the struggle for racial equality surged. In 1963, just a few blocks from her home, the Sixteenth Street Baptist Church was bombed and two of Condoleezza’s school mates were murdered. This anguished battle ground was her daily life. But with a Presbyterian Minister for a father, Condoleezza’s foundations from childhood were rooted deeper than her circumstances. She became active in her father’s church at a young age, playing the piano alongside her mother on the organ, attending youth groups, and shadowing her parents as they gave her a tangible example of faith, trust in God, and good morals.

Her parents always encouraged her to strive for greater, because the power behind her was most certainly stronger than the forces opposing her. It was this instilling of God’s truth that made living in the war zone of Alabama bearable. It was her parent’s constant encouragement that challenged Condoleezza to aim for the moon, and land amongst the stars.

A woman of achievement
Education was the God-given key granted to Condoleezza to unlock the doors of destiny set before her. With Bachelor, Master, and Doctorate degrees under her belt, Condoleezza has taken the world by storm. An intended Music major at the University of Denver, God had different plans that eventful day when Condoleezza attended a Political Science class by famed diplomat, teacher and mentor to several politicans, Josef Korbel. Unknowingly, the Lord was carving a path for her, headed straight towards the white house.
The White House
Nominated for Secretary of State by George W. Bush in 2004, Condoleezza initiated ‘Transformational Diplomacy’ a programme focused on building stronger infrastructure, and decreasing foreign nations’ dependence on American aid. The September 2001 acts of terrorism left Condoleezza with a strong burden of the world’s suffering and oppression. By relocating American diplomats to countries such as China, India, and even South Africa, Condoleezza was intent on exploring internal domestic solutions to problems.

Breaking ground in initiating peace agreements in the Middle East, reopening nuclear negotiations with North Korea, and pressing the United Nations to investigate war crimes in Sudan, it is no surprise that Condoleezza has been declared four times by Time Magazine as one of the most influential people in the world.

Seeking God’s guidance
“American slaves used to sing, ‘Nobody knows the trouble I’ve seen – Glory, Hallelujah!’ Growing up, I would often wonder at the seeming contradiction contained in this line. But as I grew older, I came to learn that there is no contradiction at all.

I believe this same message is found in the Bible in Romans 5, where we are told to “rejoice in sufferings, knowing that suffering produces endurance, and endurance produces character, and character produces hope, and hope does not disappoint us, because God’s love has been poured into our hearts through the Holy Spirit which has been given to us.”

In an interview with Christianity Today, Condoleezza states: “I just ask for guidance. I can remember in difficult times, like when things were really bad in Iraq, I would not say, ‘Lord, can you help me figure out this problem?’ but, ‘Can you somehow show us a way out of this?’ That’s how I think about it, not specific answers to specific questions.”

A woman of faith in Christ
Who would have thought that in this global ‘progressive’ society where religion and faith are considered archaic by the world’s standards, that one of the most influential women of our time believes and places her faith in Jesus Christ?

Yes, our Lord is still at work raising people and anointing them to positions of authority! 