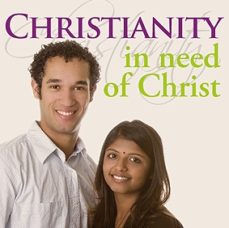 Christianity In Need Of Christ

I was raised in a predominantly Christian society. My parents were longstanding members of the Netherdutch Reformed Church in our town and we were your typical church family. My father was a deacon and later an elder in the church.  My mother was involved in general church service work – collecting offerings for the church, managing the cutlery rentals and contributing to almost any event where food was involved! The children all attended Sunday school (referred to as Catechism), where we were taught everything that the Netherdutch Reformed Church believes in. Every Sunday the entire congregation recited our church’s Declaration of Faith as stated in the Catechism.

a traditional upbringing
Also, we were all baptised as babies, which to our church was a doctrinal substitute to the Jewish circumcision. Around the age of 16, all children were expected to have successfully completed the Sunday school courses and presumed to have a proper understanding of the Christian faith. This stage was marked by something of a graduation ceremony or a confirmation event.
This was the environment in which my understanding of being a Christian was formed. As I became older in this process and my thinking became progressively independent, I started counting myself extremely lucky to have been born and raised in this Christian culture. There were times when I actually felt sorry for people who were not as ‘lucky’ as I was to be born into Christianity. In fact, it all started seeming a bit unfair to me. Later I came to the conclusion that God must have substituted the chosen nation of Israel with the Reformed Church of today, or even with the white ‘boere’ nation of the day.
Back then, being of white skin colour almost guaranteed your classification as a Christian. By whatever means of reasoning, I believed I was a chosen child in a chosen church.

dead religion
Meanwhile on the other side of town there was the so-called Christian ‘sect’ of the Apostolic Faith Mission. They believed some strange doctrine that we considered to be evil, having the audacity to base it on Scripture.  My friends and I used to make fun of their practices, like the baptism of adults when they came to faith in Christ. There was no difference between their religion and that of Hindus or Muslims to me. They were all outside the teaching of our church, and therefore wrong. In my mind we were the ones going to Heaven and I still felt very sorry for the rest.
I fervently believed in my religion and counted myself righteous above anything that said otherwise. During my last school years and up to the age of 27, my life became one big disaster. Not only was I becoming a bad Christian, but by no standard of any religion was I being a good person. I crossed every boundary I thought ever existed and I wanted to commit suicide because of what I had become.
On that day on 14 April 2004, I made what was probably my first honest and broken- hearted approach to God in my entire life. I confessed my sin while demanding from the then unknown God that He intervene if He existed. He did and I was born-again.

true faith in a holy god
For the first time in my life I began a relationship with the living God, the Creator, the God of the Bible and the God of Israel. All the doctrine I had ever been taught fell off me like filthy rags. I knew and believed that God is real. I discovered the meaning of eternal peace.
Before 14 April 2004 I wanted to die, yet was filled with the fear of death. After that day, I had peace that stretched from the present and far beyond death into eternity. Death lost its power over me.
we all seek the truth
Opposite my townhouse lives a married Indian Hindu couple. This man seems like someone who has his life together, evident in the small things such as the way in which he cares for his vehicles. They are always spotlessly clean and taken care of in a manner that causes me shame.  Sometimes we meet outside and make small talk. I can honestly say that this man and his wife are the nicest people I have ever met. Seeing them causes an instant smile, which is always returned in the same manner.
My Indian Hindu neighbour got me thinking about the difference in our religious upbringing and I realised that it is not that much different at all. They were also born into a religious culture; they were also subjected to religious doctrine and up to this day probably believe that their religion must be true.  Their religion must also, in some sense, seem incomplete. They too must have a Voice telling them that all is not right, although they probably do not know who the Voice belongs to.

every human needs god
I am now convinced that religions of all types are only that – religion. No man has more favour before God than another, simply because he was born into a specific religious culture. Every person on earth needs Christ. Those born into Christianity may know that a person needs to declare Christ as the Son of God, the Saviour of the sinner, but they might not yet have personally done this.
Everyone has a desire to worship God, of which our diverse religions are the evidence. Every person knows that he/she is sinning against God, of which an inherent sense of good and evil is evidence.
Our conscience ensures that we can never say we did not know. Every man desires freedom from sin and knows he needs a Saviour.  Christ must ring true to all people, otherwise God is not righteous. In the Church today we have lost our faith in Christ’s Gospel as a supernatural power to reconcile people with God. The Gospel has became our in-house property –  something to be discovered by those who somehow ended up with us by luck.

the christian way or christ’s way?
The truth, however, is completely upside down or perhaps the right side up. The Gospel is for the unsaved in all religions including the religious culture of Christianity. All people need Christ – not religion. All people should be brought to faith in Christ, not faith in Christianity. We should stop boasting in ourselves, but in Christ alone. In many ways Christianity has taken the place of Christ and, therefore, disappointed many people. The world ridicules the Church, because the Church is walking in the religious way, not in the Christ-like Way.
We believe that all will be fine if people would just become like us and be one of us. We have lost the powerful simplicity of the preaching of the life transforming Gospel.

god’s salvation plan is found in jesus
All men have sinned against God. God hates sin and has to destroy it, but loves the world so much that He decided to offer His only Son for man’s sin. God’s Son became a man who walked on the earth – His name was Jesus and He was crucified, slain like a lamb for all man’s sin. God determined that every person who believes that Jesus has paid the price for the sin of man, that person’s sin will be forgiven and he will inherit  eternal life.
I now know that what I needed my entire life is the same thing that is needed by my Hindu friend and my childhood Apostolic Faith Mission peers. We all need Christ and we all, even the ones raised in Christian culture, need to be born- again of the Spirit. Getting ‘saved’ is not obedience to an instruction, but every man’s own personal encounter and process with the living God, and this only through faith in Christ Jesus, His Son.

removing the labels, unveiling the love
It’s time that we start removing labels from people, automatically approving or condemning according to culture or upbringing or current religious denomination. It is time that we start seeing with God’s eyes, and hearing His voice above all others.
Let us not think more of ourselves than we ought to, but approach God in humility and trust Him to continually renew us and free us from the bondage of religion, so that we may clearly see and follow the boundless plan of salvation for the world that He has called us to be a part of.