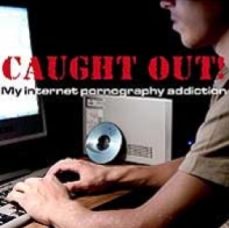 Caught Out! My Internet Pornography Addiction

…His heart was beating in his chest, his hands clammy with perspiration. A slight tremble passed through his body. He knocked on the bathroom door. He could hear her cries from behind the locked door as he waited for her reply.
His stomach knotted as beads of sweat ran from his forehead. Tears filled his eyes. Ashamed and embarrassed, he wondered how he could have been caught. He had intended to stop. This was the last time. She would never have known. He was going to change. He loves her.  It all started the day he bought that computer and downloaded the swimsuit model calendar. How could this have happened? A cold tingle passed through his body. He struggled to breathe. He would lose his wife and three month old baby. What would everyone think of him? He fell to his knees and dropped on his side on the passage floor. Curling into a ball, he sobbed silently to himself…”

Deadly secrets
Pornography is only one of the many sins that block our spiritual development, our relationships with loved ones, colleagues and, most importantly, our relationship with the Heavenly Father. We cannot accomplish any goals or life dreams if we live our lives in secret. The devil is waiting for a hold on us so that he can turn our lives upside down, hurting us and our loved ones. The devil is a manipulator with evil intentions. John 10:10 NKJ “The thief does not come except to steal, and to kill, and to destroy…”
We have to make a decision to commit our lives 100% to God. Heb 11:6 NKJ “But without faith it is impossible to please Him, for he who comes to God must believe that He is, and that He is a rewarder of those who diligently seek Him.”  Many of us fear commitment to God because it brings rejection and loss from the world. However, God loves us and wants to be part of every area of our lives.
Mercy is God not giving us what we deserve. God is a merciful God; therefore, we must confess our sins before him.  1 John 1: 9 NKJ, “If we confess our sins, He is faithful and just to forgive us our sins and to cleanse us from all unrighteousness.”  Secrets are chains that keep us from living the life God wants us to live. We must expose the work of the devil, in order to release the hold he has on our lives.  John 3:19-22 NKJ, “And this is the condemnation, that the light has come into the world, and men loved darkness rather than light, because their deeds were evil, for everyone practising evil hates the light and does not come to the light lest his deeds should be exposed. But he who does the truth comes to the light, that his deeds may be clearly seen, that they have been done in God.”
We must confess our sins before man. James 5:16 NKJ, “Confess your trespasses to one another, and pray for one another, that you may be healed. The effective, fervent prayer of a righteous man avails much.”
Be accountable to a minister or trusted friend.

Serving God completely
The more people pray for our burdens, the lighter they are for us. We must understand that there are consequences for our actions even though we have been forgiven. Once forgiveness comes, healing can begin and an inner transformation will occur.
We must serve God wholeheartedly. 2 Chron 16:9 NKJ, “For the eyes of the Lord run to and fro throughout the whole earth, to show Himself strong on behalf of those whose heart is loyal to Him. In this you have done foolishly; therefore from now on you shall have wars.”  We cannot do it alone; we need the help of others.  Heb 10:23-25 NKJ, “Let us hold fast the confession of our hope without wavering, for He who promised is faithful. And let us consider one another in order to stir up love and good works, not forsaking the assembling of ourselves together, as is the manner of some, but exhorting one another, and so much more as you see the Day approaching.”
God is in control, He has the power to give and to take away. Isa 45:9-10, “Woe to him who strives with his Maker! Let the potsherd strive with the potsherds of the earth! Shall the clay say to him who forms it, ‘What are you making?’ Or shall your handiwork say, ‘He has no hands’?” vs. 12, “I have made the earth, and created man on it. I – My Hands – stretched out the heavens, and all their hosts I have commanded.”
Don’t let it get to the point where the devil has control. Don’t end up lying on the passage floor. Hand it all to God, give Him control of your life, and never give up. Prov 24:16 NKJ, “For a righteous man may fall seven times and rise again…”

Practical steps for change
“It seemed as though hours had passed since his wife had locked herself in the bathroom. His sobbing had stopped and a fog of silence had filled the house. The key in the lock turned and the bathroom door opened slowly. He quickly lifted himself off the floor and looked his wife in the eyes and saw they were red and swollen from crying. Their baby lay sleeping in her arms. He gently wiped the tears from under her eyes and put his arms around her and their baby. He had decided to make a commitment to fight the addiction to pornography and regain the trust he had lost from his wife.
He returned to his local church to seek council. It was not going to be easy. His pastor suggested that he sit down with his wife and inform her of the changes he needed to make and the support he needed from her in order to fight the addiction; that he purchase a programme that filters any pornographic sites and blocks access to them immediately; that he ask that all magazines in the house be kept hidden from him – for as the saying goes – ‘Out of sight,out of mind’.
In the months ahead inner transformation had begun and the relationship with his wife was growing from strength to strength. He had broken the hold that the devil had on his marriage and had made a commitment to become a true man of God.”