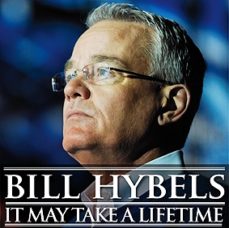 Bill Hybels: It May Take A Lifetime. Exclusive JOY! Interview
At first glance, you could mistake him for an easy-going sort of guy – dressed in a casual button-down shirt, blue jeans, sandals and a robust tan borne of spending time on the water. Most days off, he can be found savouring the solitude, sun and wind from the deck of a sailboat, or walking the shores of Lake Michigan with wife Lynne, kids Todd or Shauna, or three-year-old grandson Henry.

But although he loves to play (he sails competitively), make no mistake: Bill Hybels is all business when it comes to reaching people who are far from God. He sits at the helm of a striking church phenomenon – a phenomenon best known simply as Willow Creek. In 1975, Hybels and a band of friends founded Willow Creek Community Church, an interdenominational church in suburban Chicago. “We were just a bunch of kids who didn’t know what we were doing,” Hybels says. “But we were dead serious about one thing: we wanted our friends to know Christ. Lots of people our age thought church was irrelevant – or worse – boring. We wanted to create a church service they would come to! We had no money, so we went door-to-door selling tomatoes to raise enough money for sound equipment. We rented a run-down movie theatre. And that’s the illustrious beginning of Willow Creek.”

Humble beginnings
Utilising music, drama, multi-media presentations and teachings from Scripture, Bill and team brought the message of Jesus Christ to their friends in a way they could understand. “Sounds like a no-brainer today, but back then, it was a foreign concept,” Hybels says. The strategy – now known as the ‘seeker service’ – worked. The Holy Spirit moved, people responded to God in swelling numbers, and the church thrived.  Today, more than 20 000 people per weekend worship at one of Willow Creek’s five campuses or burgeoning Spanish-language service, Casa de Luz (‘House of Light’). The church appears annually on lists touting “largest” or “most influential” churches in America.

A global ministry
In 1992, Willow Creek launched the Willow Creek Association (WCA), a not-for-profit arm of the church that exists to maximise the life-transformational effectiveness of local churches worldwide. Since the birth of the Willow Creek Association, tens of thousands of churches from more than 90 denominations have received WCA resources, and more than one million church leaders around the world have received training and inspiration. Their 2010 Global Leadership Summit will reach more than 400 cities globally, including nine cities in South Africa. As Willow Creek gets ready to celebrate its 35th anniversary, JOY! Magazine caught up with Bill to hear his reflections on the past 35 years.

When you look at what God has done over the past 35 years, what are your thoughts?
I think, “Only God.” Only the God of the universe could take a rag-tag bunch of kids and build something that, through His strength and direction, would have a positive influence on His Kingdom. I am thrilled and humbled to be along for the ride.

What was your dream back in 1975?
When we started Willow Creek, I had the sense that I wanted to spend my life in the same church. I remember thinking, “It may take a lifetime for me to grow up to become a good leader, and it may take a lifetime for a church to become an Acts 2 community.”  The arbitrary number that was always in my mind – and I’ve rarely spoken about it – was 40 years. I knew I would like to give the major portion of my life to the same church, if God would have me do that, and if the congregation would be responsive to it.

How has Willow Creek’s mission to ‘turn irreligious people into fully devoted followers of Jesus Christ’ adjusted its strategy in recent years?
We used to feel that to reach seekers and build up believers, we had to have separate services and strategies for each. But because seekers have changed, society has changed, peoples’ availability for church participation has changed, we now believe that we can utilise a one-service format, and that service can be spiritually catalytic for explorers, beginning Christians, growing Christians, and those who are Christ-centred. We have a better understanding these days of what it takes to move people effectively toward Christ-centredness. We custom design ministries and opportunities toward that end.

What were some forks in Willow Creek’s road where you feel God led you in the right direction?
Three forks in the road come to mind:

Women in leadership. Early on, this was huge. We came to an intersection there, and our Elders studied God’s Word for almost two years. Then we went public that we really do believe that women can use their spiritual gifts just like men can
Going global – deciding that we wanted to serve the Church of Jesus Christ beyond Willow’s walls. We have, as Paul says in 2 Corinthians 11:28, “concern for all the churches.”
Issues of social justice: Global poverty, AIDS, racial reconciliation. These are forks in the road we didn’t seek. They came to us. And God provided the guidance we needed.

Your travels have exposed you to a broad spectrum of cultures. Do you see a commonality among people that transcends nationality, circumstances and era?
I think the core needs of human beings are the same across all borders, generations and cultures. The way in which those core needs are manifested differs dramatically, and how churches address peoples’ core needs changes constantly. We’ve had to get comfortable with the never-ending search for effective tactics and strategies. People at their core are love-starved, they’re purpose-starved. God has “set eternity in the hearts of men” so people wonder about their eternity.

At the end of a really bad day, when you lay your head on the pillow and it’s just you and God, what goes through your mind?
The worst day of doing God’s bidding is better than the best day of not doing it. So no matter how the circumstances have stacked up against my efforts or whatever bad news I’ve received, if my efforts have aligned with the call of God on my life and I’ve been faithful to Him, I sleep very well. If, on the other hand, I’ve made secret compromises in my spirit, or haven’t been on mission or responsive to God’s promptings,  that will be a longer night. At the end of the day I only have to please one person – God.

Given the pace of life that senior leadership requires, how do you keep your ear tuned to God?
It’s a never-ending battle for me, and it’s increasingly complicated by the ubiquitous nature of information, the 24/7 connect with the Internet, and the accessibility people expect of senior leaders. I get 100-200 emails every day – to my private email – from people who need information or decisions from me in a timely fashion. Higher levels of discipline are required to carve out the time necessary to be responsive only to God.

I tell my colleagues, my board, my congregation, “You’re gonna have to wait. Not available during this time,” in order to quiet my heart, read the Scriptures, let the voice of God speak to me deeply. You have to push back very hard and disappoint people in order to protect the space necessary for solitude, reflection, confession of sin.

What does your connection with God look like?
A ruthless commitment to early mornings. I sometimes remind people who want access to me in the mornings that nothing will get me to budge from that which keeps me rooted, grounded and sane. I work uninterrupted, without communication, from 6 until 9 in the morning. Then I ask God to speak to me throughout the day, and I seek to be available for His promptings.

What excites you about the Willow Creek Association?
Everything. I get to work with senior church leaders from around the world. I get to learn from leaders who are better than I am. I get to make deposits in younger leaders. I love the purity of the WCA’s mission: to help other churches prevail. I receive more from interactions with leaders around the world than I ever contribute.  If someone emails me to say, “Thank you for investing in me,” I respond, “The witness of your life made a larger investment in me than whatever I made in you, so thank you.”

Any hints as to what Summit guests can expect this year?
I’ve tried to distil my most poignant learning’s of leadership over 35 years into a 55-minute talk. What things must leaders get right, fundamentally, to move their organisation or church ahead? The list isn’t that long, if you get four or five of these essential down, over time you’ll get better.

If you could share a meal with any living leaders in the world, who would it be?
By God’s Grace, I’ve had dinner with many people on my leadership radar, but Nelson Mandela is the only person I’d put on that list, because of his influence on my life and on the world, because of his courage. I’ve been to Robben Island, I’ve read his speeches, I’ve read everything he’s written, I’ve read pretty much everything written about him. I am under no illusion that he is a perfect leader or perfect human being, but he accomplished one of the great societal movements of history.

You’ve spent time in almost every country in the world. How does South Africa rate?
I love South Africa. In fact, Cape Town is my favourite city in the entire world. I love the waters off the shoreline, I love the Cape Town harbour, I love Table Mountain and  the Twelve Apostles, I love the intensity of the climate – the power of the wind, the brilliance of the sun, the storms that come. I love the mixing of the rich and the poor, the British influence mingled with African history, all on the same street. I love the potential. South Africa is the most influential country on the continent. Since my first trip there in the 90’s, my prayer has been that the Church in South Africa would reach such a level of strength that its influence would spread across the rest of Africa. It thrills me with each passing year to see those prayers being answered through the heart, talent and courageous leadership of South African Christians.