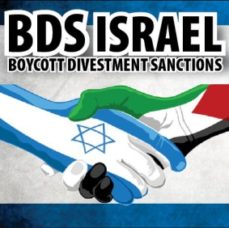 A furore erupted in the media recently when Hollywood actress, Scarlett Johansson (who represents Israeli soda-maker SodaStream) featured in a national television advert for the company.
Suddenly, average Americans who had previously not cared for, nor been informed of, the BDS Campaign (which stands for Boycott, Divestment and Sanctions against Israel) jumped into the ring for a war of words and so-called principles.
A global campaign
But the BDS movement is not just limited to America, in fact it is a global movement gaining ground and influence worldwide, in seeking to alienate and ostracise Israel and Israeli run companies/manufactured products both financially and politically.
The movement, was started several years ago by the Palestinian BDS National Committee in 2007 and their mission (according to their website: www.bdsmovement.net is to put pressure on Israel and [raise public opinion against the Holy Land] until it complies with international law and Palestinian rights.
A militant propaganda machine (with excellent branding and marketing capabilities), BDS is a strategy that [according to themselves] allows people of conscience to play an effective role in the Palestinian struggle.
Harmful and misguided…
So why should we care? Well, firstly, the BDS campaign has far-reaching effects, as many Israeli products are globally sold and used; a halt in their production would have serious financial implications not only for the consumer and Israel, but also for thousands of Palestinian families and workers who are employed by these companies (which the BDS propagandists fail to publicise or recognise).
Secondly, an economic crisis in Israel would lead to widespread instability in the region, which would ultimately further harm the Palestinian that BDS seeks to “protect”.
Every year thousands of students and people are brainwashed with campaigns either for or against Israel, so it is important that as Christians we have a Biblical worldview on the subject, and an informed outlook.
Why care?
For years, many Palestinians have continually asserted that they would far rather live under Israeli rule, and work for Israeli companies, than not. Yet the media ignores this fact and politicises the issue. We must be informed.
When it comes to the Middle East, thare are no “innocent” sides, however, we should have a desire in seeing Israel prosper and operate according to God’s Law.