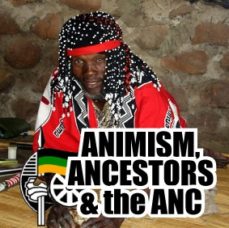 The centenary celebrations of the ANC and their dedication of the country to the ancestral spirits sparked nation wide controversy earlier this year. How are we as Christians to respond? What does the Bible say concerning the spirits of our ancestors? To whom should South Africa be dedicated? Are there examples in history of other nations that have invoked the spirits of their ancestors?
Ritual slaughter
The African National Congress started off the year by throwing itself a lavish birthday party in Bloemfontein. With drums pounding and chants filling the air, the ANC president, Jacob Zuma, initiated the traditional cleansing ceremony by ritually sacrificing a bull, killing it with a spear while it was tied to a tree. ANC secretary general, Gwede Mantashe, explained: “traditionally the act of slaughtering has different meanings. All nations have a way of celebration through slaughter…”
Despite his assertion that “all nations have a way of celebration through slaughter…” journalists could not think of how the Queen of England, for example, marks national events by ritual slaughter of a helpless animal. The inter-faith service included messages and blessings from representatives of all major religions, including Muslims, Hindus, Christians, Rastafarians, and traditional Animist witchdoctors.
Opposition from Christians
Dr. Kenneth Meshoe, opposition leader of the African Christian Democratic Party, turned down his invitation to attend the festivities, declaring that invoking the spirits of dead leaders will have devastating consequences for the country. Instead Rev. Meshoe joined other Christians outside the Union Buildings in Pretoria for a prayer and worship ceremony to dedicate South Africa to the Living God.
Illogical reasoning
In response, the ANC chaplain general, Vukile Mehana, criticised Dr. Meshoe for his “fundamentalist Christian beliefs” declaring that he was “practising religious intolerance”. Vukile Mehana condemned Kenneth Meshoe’s position as “totally unacceptable and a direct contravention of our constitution as well as the fundamental values and principles of Christianity.” Venerating the ancestors
Mehana declared that it was “mischievous and misleading” to suggest that the ANC favoured any one particular faith over others. He insisted that the centenary celebrations did not involve the worshipping of ancestors, but the venerating of the spirits of those who were part of its history. The distinction between ancestor worship and “venerating the spirits” would seem to be a fine line.
Confusion and distortion
The position of the ANC chaplain general seemed confused and self-contradictory. On the one hand, he condemned Dr. Meshoe’s “fundamentalist Christian beliefs”, and on the other hand maintained that Meshoe’s position was in direct contravention of “the fundamental values and principles of Christianity”!
It was not clear how Dr. Meshoe’s position was a violation of the Constitution. One would have thought that freedom of religion, freedom of opinion, freedom of speech and freedom of association were guaranteed by the Constitution.
A cursed nation
An example of a country which has been dedicated to ancestral spirits is Haiti. As the Wall Street Journal noted in its article: ‘Haiti and the Voodoo Curse: The Cultural Roots of the Country’s Endless Misery’, that despite Haiti having received billions of dollars in foreign aid over the last 50 years, it remains the least developed country in the Western hemisphere.
Operation World reports that Haiti is the poorest state in the Western hemisphere. Effective unemployment is around 70%. 98% of the island is deforested. Haiti has some of the worst pollution, drought, famine, drug abuse and spread of AIDS in the Western hemisphere. An estimated 75% of the population are actively involved in voodoo. Haiti is at the top of the corruption index; 25% of the police are in the pay of drug lords and gangs.
At its inception in 1803, Haiti was dedicated to satan. In 2003, voodoo was declared a national religion of Haiti; the massive earthquake in 2010 was the worst natural disaster to ever hit the Western hemisphere, with over 300 000 dead.
Obstacle to progress
The Wall Street Journal quotes Cameroonian development expert, Daniel Etounga-Manguelle as observing that voodooism is “one of the principal obstacles to progress in Africa.” Daniel Etounga-Manguelle observes that “Haiti’s culture is powerfully influenced by its religion, voodoo. Voodoo is one of numerous spirit-based religions.
It is without ethical content. Its followers believe that their destinies are controlled by hundreds of capricious spirits who must be propitiated through voodoo ceremonies.”

What is animism?
Animism is a “progress-resistant force”. Animism is spirit worship. It involves necrolatry – the worship of the souls of the dead. The witchdoctors or shamans are regarded as expert mediators who know the proper incantations and sacrifices to placate the spirits. Animism seems obsessed with invoking good luck and avoiding bad luck. Each community is seen as having its own sets of territorial gods and spirits.

A religion ruled by fear
Fear plays a major role in the life of Animists. They see the world as full of spirits, omens, spells and forces. Through magic, divination and sacred rituals, they seek protection to appease the gods, the spirits and the ancestors. They observe numerous taboos and prohibitions and observe sacred places. For example, in Haiti there is a sacred tree where a pact with the devil was signed over two centuries ago by witchdoctors.
Ritual murder
The High Court in Pietermaritzburg found 28 year old Smangaliso Ngubane guilty of murder for having slaughtered his 17 month old baby daughter in a ritual killing. Amini Xaba was stabbed by her father six times in what state witnesses described as “an offering to his ancestors”. Ngubane testified that he had heard voices that had told him to do this.
Child sacrifice
In Uganda the government is setting up posters in playgrounds and on roadsides warning of the danger of abduction by witchdoctors for child sacrifice. Police have investigated hundreds of cases of child sacrifice in Uganda. The Anti-Human Sacrifice Task Force reports that there is a growing belief that when you sacrifice a child, you get wealthy. There are people willing to buy these children to be sacrificed for the prosperity of their business!
Powerful spells
Jubilee Campaign, reports that they know of over 900 cases of human sacrifice in the country. Churches are singing: “Heal our land, end child sacrifice.”
An undercover reporter for the BBC filmed a local witchdoctor who explained how the sacrifice of a child is “the most powerful spell”.
The witchdoctor was recorded saying: “there are two ways of doing this, we can bury the child alive on your construction site, or we can cut him in different pieces and put the blood in the bottle of spiritual medicine.”

Animism is serious
These and many other examples remind us that Animism and the consequences of dedicating a nation to ancestral spirits are very serious. The Scriptures are clear: “You shall not…practise divination or soothsaying…give no regard to mediums and familiar spirits; do not seek after them, to be defiled…I am the Lord your God.” Lev 19:26, 31
What the Bible says
“When you come into the land which the Lord your God has given you, you shall not learn to follow the abominations of those nations. There shall not be found among you anyone who makes his son or his daughter pass through the fire, or one who practices witchcraft, or a soothsayer, or one who interprets omens, or a sorcerer, or one who conjures spells, or a medium, or a spiritist, or one who calls up the dead.
For all who do these things are an abomination to the Lord and because of these abominations the Lord your God drives them out from before you. You shall be blameless before the Lord your God. For these nations which you will dispossess listened to soothsayers and diviners; but as for you, the Lord your God has not appointed such for you.” Deut 18:9-14
Communicating with the dead
The Scriptures are clear that we are not able to communicate with the spirits of departed ancestors. It is appointed unto man once to die and after that the Judgement (Hebrews 9:27). There is a great gulf set between the living and the dead and communication between them is impossible (Luke 16:26). However, many people who think that they are communicating with ancestral spirits are actually communicating with deceptive demons (Matt 10:1; Acts 19:12; Jude 6).
Demonic activity
Occultism makes the enemies of God the guiding forces and the source of knowledge. Those who are “giving heed to deceiving spirits and doctrines of demons” actually “depart from the faith…” 1 Tim 4:1. We are commanded “Do not learn the ways of the heathen…” Jer 10:2
Dedicating South Africa to God
The only One to whom South Africa should be dedicated is our Creator God, the only Redeemer and Saviour, (as was done when the Voortrekkers established the Day of the Covenant). “Therefore submit to God, resist the devil and he will flee from you.” James 4:7
Jesus Christ is the King of the nations. He is the Creator, the Eternal Judge, the only Mediator between God and man (1 Tim 2:5-6). Jesus Christ is the Way, the Truth and the Life, no one comes to the Father except through Him (John 14:6). There is no other Name given under Heaven by which we must be saved (Acts 4:12).