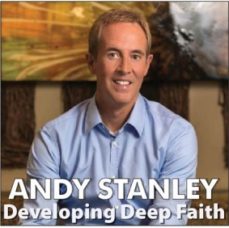 Having spent over 25 years in ministry, Charles Andrew Stanley knows a few things about faith. Recognised as the 20th most influential Christian in America and claiming the title as leader of one the largest churches in the States (up to 33 000 people attending each Sunday at seven campuses), Andy is no stranger to the Christian limelight.

Son of a preacher man
Growing up as a preacher’s kid (his father is renowned preacher and televangelist, Charles Stanley) Andy immersed himself in the things of God, but life was not necessarily plain sailing just because he came from a Christian family. “I grew up in a home where the Bible was central; our family always prayed together. Some of my earliest memories are of my parents, sister and I going into the lounge and praying together.
Every time there was any kind of marginal issue or decision to be made, my dad would call us to our knees to pray. Growing up, there weren’t any decisions that were made without prayer – that really left a mark on me. Especially during the tough times of ministry when I saw church politics run rife and man’s agenda take over the work of the ministry.”
‘Called’ to lead
Despite the legacy his father was building for Andy to one day take over as senior pastor of the First Baptist Church in Atlanta, the younger Stanley had no specific intentions to enter the ministry full-time. “I never really felt called to ministry like most of my friends [including teenage friend, Louie Giglio]. I can remember being almost jealous of the guys who had such a certainty about what God wanted them to do. I never had that – probably because I was afraid of what it meant.”

Discovering his passion for church
Starting out quite by accident as the youth pastor at his father’s church, Andy pioneered a new way of “doing church” that was to unleash an explosion of excitement and growth – specifically amongst unsaved  and unchurched people. “I had no desire to start a church, or to pastor a church as then I would have to do ‘adult’ ministry, and I dreaded the thought of ever doing that.
There was so much freedom and creativity in student ministry. By being creative and working in an informal environment, we were forced out of our traditional box. We felt that we could capture the imagin­ation of people who had given up on church,  if we could do it in a different way. I remember saying to my wife at the time, “This is what I want to do for the rest of my life.”
Despite experiencing incredible growth and community impact at the time, Andy came under immense criticism from some of his elders and leaders. As tensions rose at church, so too at home between his parents: after 25 years of marriage, his mother eventually filed for divorce. Charles Stanley’s divorce, tantamount to a sin in his conservative congregation, led to a rift between father and son that ultimately took years to mend. Charles felt betrayed by his son, Andy felt unheard by his father. With goodwill depleted between the pair, Andy decided it was time to move on.

Walking his own way…
A few members suggested that he start a church off-shoot, but Andy declined. Despite a pregnant wife and two little toddlers in tow, Andy resigned with no specific plan ahead. “It was a tough time,” says Sandra Stanley, “but neither of us felt any fear.” One day after deciding to begin a church on the opposite side of the state so as not to compete with his father, news spread quickly.
Despite the anger and disappointment he may have felt, Charles still gave his blessing for Andy to plant a church – one that would rival – and today even out-dwarf – his father’s. At the time this must have cut deep, as Charles watched his heir apparent forge his own destiny. But today the two men have reconciled and Andy recounts their journey with candid honesty and vulnerability in his latest book, ‘Deep and Wide’.

Landing on our shores this month!
The book is semi-autobiographical, offering an in-depth view into the life and times of the Stanleys, but it is also a church handbook, sharing the strategies that God has given Andy over the years as to how to develop a deep faith not only in his life, but those of his congregants too. This month Andy will be training church leaders across South Africa as he visits here with Willowcreek. 