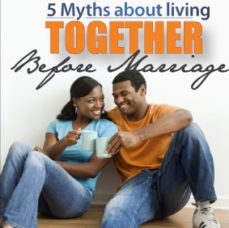 So you think there are advantages to living together rather than getting married? Before you close your mind any tighter on the issue, check out these five myths:

Living together first will tell us if we are right for one another.
No it won’t. You are comparing apples to oranges. Just because one tastes good or bad to you doesn’t mean the other will taste the same. Marriage is a totally different proposition than simply living together. Marriage is built upon a promise before God to remain faithful to one another. Living together involves no such promise. You could fail at living together with someone that you may have succeeded with in marriage. It all depends upon how much both people are relying on God for assistance and love. By the way, the divorce rate of couples who live together first is significantly higher than for those who do not.

If your partner will not commit to you for life, don’t deceive yourself into thinking that he or she will be willing to make that commitment at some later point. Marriage is a promise to stay together. Living together for many couples lasts approximately 18 months, on average.

At the end of that year and a half, you still have no idea how your partner might have done if you both had taken the plunge and made a lifetime commitment to one another. Now you will never know. You settled for the easy way in and the easy way out. Your shot at true love with that person gets blown away with the wind if you decide to shack up first. Living together prepares people to find reasons not to get married. Marriage, on the other hand, is based on unconditional love and a lifetime commitment. It is not an ‘audition’ for marriage like you have with cohabitation.

All of us are imperfect and bound to slip up at various times during the audition. Living together is conditional ‘love’. It’s “I love you” now…and “I will really love you” once you prove you are worthy. You better walk on eggshells in that situation. It gets pretty dicey in a hurry…and awkward.

Living together will show us if we are sexually compatible.
No it won’t. That would be true if you were animals – say dogs for example. You are human beings. You both have a soul. Sex between dogs is only physical. Sex between human beings was designed to be physical, emotional and spiritual. God designed it in such a way that sex outside of marriage will never produce true intimacy. That is why it leaves you still feeling empty after the physical high has gone away. Without a spiritual union through Christ, sexual compatibility is only measured in a superficial way. If you have not yet had sex in marriage while both of you are born-again and living for Christ, then you have no idea what you are missing. It is the total package…body, soul, and spirit. No wonder people without that union are often drawn to continue experimenting sexually to try to satisfy their hunger for a spiritual union in sex. That hunger can be satisfied, but only in marriage and only when both the husband and the wife are believers in Christ.

We are just as committed to each other as a married couple.
No you’re not! Neither of you are ‘all in’. You are both ‘hedging your bets’. You are both still ‘kicking the tyres’. Your commitment is conditional. It’s not ‘for better or worse’. Instead, it’s “for better or…see ya, wouldn’t wanna be ya.” Anyone in that situation must surely feel the pressure to perform. You have been given a trial run by your partner. Aren’t you lucky!

Deep down, you know in your heart that marriage is far more than a piece of paper. It is a promise before God to love and cherish your spouse for life. People who only shack up also make a promise, sort of. “I promise to do my best…and to watch you very closely to determine if you are worth it. If it doesn’t work out…oh well. It’s not like we were married or anything.”

Our friendship won’t suffer by moving in together.
That’s what you think! Your friendship will soon become tense and uncomfortable. You went from courtship to ‘no man’s land’. You’re not married, but you’re not really dating either. How boring…and unnatural. No wonder the comfortable feelings of friendship soon turn into the awkward feelings that come with shacking up. It’s ‘friends with benefits…minus the unconditional friendship’.

There is always the fear of being kicked to the curb if you don’t measure up. No security. No deep peace. Hence, you end up with a strained relationship that is fraught with angst. Not exactly the ingredients of a healthy friendship.

We can love one another just as much without marriage.
No you can’t! God says so. It would be true if you had evolved from a monkey. In that case, the Bible would only be a storybook filled with fantasies. As it is, you did not evolve from a monkey. You were created by God in His image. He consists of three Persons in One God: Father, Son and Holy Spirit.

You too are a being that is three in one…body, soul and spirit. Monkeys are not three in one. God did not institute marriage between monkeys. God did not promise to bless a union of monkeys. You have no idea how much love can fill your heart for your partner until you receive God’s love in Christ and get on the ‘marriage train’ for life. Comparing living together to marriage is comparing apples to oranges…and maybe even to bananas…you know – the kind monkeys eat. 