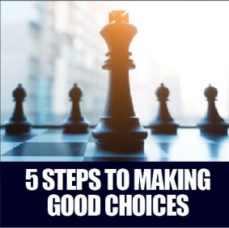 Making choices is never easy, whatever stage of life we might find ourselves at. Whether we’ve just left college and are seeking that first step on the career ladder, or whether we’re well established in our job and contemplating moving to a new ladder altogether, it can be difficult to know the right way forward. But there are steps that we can take if we want to make good choices.

For many years, people have prayed that God would raise up men and women of God to positions of leadership and influence in America. However, during the Obama administration, it seemed the country was moving further and further away from Biblical values as its president pushed forwards with his liberal agenda, bouyed by the leftist media. Now following the controversial election of Donald Trump, it appears that a fresh wave of Christian values are influencing the rhetoric.
Not all Christians have been enthusiastic about the billionaire’s rise to the White House, and whilst there is certainly room for healthy critique and a prudent approach to his campaign claims (and his personal shortcomings), there is a pressing need for us to pray for him and to educate ourselves with the truth. INcontext Ministries have highlighted a few pertinent points that the liberal media twist; please read this to educate and inform your prayer life.

“Israel” – a word that garners many emotions and a wide range of responses. It not only describes a land; it describes a people, a faith, a history and a future. It is Biblical, political, personal, and international all at the same time. It represents a complex maze of natural and spiritual issues that need to be carefully and thoroughly unpacked and understood. Since the dawn of the millennium, a new form of war against Israel has added itself to the many forms of attack that have been targeted against this nation and her people. A war of words that has its aim at anyone who will listen, but is specifically targeted against students at institutions of higher learning.

What is Israeli Apartheid Week
In March of each year, “Israeli Apartheid Week” (IAW) is held on university campuses across the world. Drawing a direct comparison to Apartheid South Africa, organisers of this wicked event amplify the lie that Israel is an apartheid state and encourage those who wish to see peace in the Middle East to Boycott, Divest, and Sanction Israel. There are many evils to IAW, a few of which are highlighted below.
The hearts, minds, and emotions of students are manipulated and deceived into believing that Palestinians suffer the same racism, discrimination, prejudices, exclusions, and hardships that black people suffered under Apartheid South Africa. Israel is NOT an apartheid state. By calling Israel an apartheid state, the evil that signified South Africa’s apartheid regime is trivialised and the inspirational story that is our continued journey of transformation is nullified.