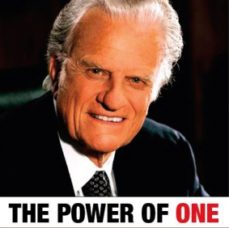 THE POWER OF ONE
There are times when we feel totally inadequate of achieving anything of significance for God by ourselves. At such times we need to remember the many great things that have been accomplished by individuals, and to be reminded of the words of American author and activist, Edward Everett Hale:
“I am only one, but I am one. I cannot do everything, but I can do something. And because I cannot do everything, I will not refuse to do the something that I can do.”

One woman who brought hope to the handicapped

This quote was later adopted by Helen Keller as her life motto.  Keller lost her sight and hearing at the age of nineteen months. She learned to read and write in Braille, and to use the hand signals of the deaf-mute, which she could understand only by touch. Her example served as a huge inspiration to thousands of handicapped people.

One man who turned the tide against slavery
Another individual who radically changed his society was William Wilberforce.  He was a member of the British House of Commons, and for 20 years waged a lone campaign to restrict and abolish slavery in England.  It was no easy task.  His speeches and motions in Parliament were met with a great deal of opposition.  He had to endure criticism and repeated attempts to blacken his reputation. He was mocked as the leader of a hopeless cause, but, after 20 years of campaigning, the English Parliament finally outlawed slavery, setting an entirely new public moral tone in England.  He was one man who refused to give up.
One man who woke up a city and a nation
Jeremiah Lanphier worked for a downtown New York church. Burdened by the need of the city, he decided to invite others to join him in a noonday prayer meeting. Six people joined him for the first prayer meeting and they continued to pray faithfully over the next few months.  Then the stock market collapsed and people became anxious and even desperate.  Within six months, ten thousand people were gathering daily for prayer in New York, and in the next two years, a million converts were added to American churches.

It was the greatest revival in New York’s colourful history, and it was impacting the whole nation. There was no fanaticism, no hysteria, simply an incredible movement of the Spirit of God that moved people to pray. It all started when one man had a vision and a burden to pray.  He wasn’t a great evangelist or a famous preacher. He was just an ordinary man. And God used him.

Edward Kimball was a Sunday school teacher who took it upon himself to share the Gospel and win a young shoe salesman named D.L. Moody to Christ. D.L. Moody went on to become one of the greatest evangelists in his day. But there is more – D.L. Moody went to England and worked a profound change in the ministry of F.B. Meyer. F.B. Meyer, with his new evangelistic fervour, influenced J. Wilbur Chapman. Chapman helped in the ministry of converted baseball player Billy Sunday, who had a great impact upon Mordecai Ham. And Mordecai Ham, holding an evangelistic rally in North Carolina, led a teenaged Billy Graham to Christ.  And the rest, as they say is history.

You many only be one, but you are one. You may not be able to do everything but you can do something.  So go out and make a difference.

Did Judas Start Out A Traitor?
–By John Bevere

Most of us know about Jesus’ twelve disciples, the men who followed Him closely during His years of ministry on earth. Of all these men, there was one who took a very different path from the others. His name was Judas, and his is the tale I want to examine today.

Judas was the man who betrayed Jesus to the religious leaders, ultimately resulting in His crucifixion. But did Judas start out a traitor?

Consider these facts: Like the other disciples, Judas left everything to follow Jesus. He preached the kingdom, healed the sick, and saw people set free. He made a lot of sacrifices to be one of the twelve. So what went wrong?


To answer this question, let’s look at a time when Christ and His disciples were enjoying dinner with some friends. After the meal, a wealthy woman poured out an entire bottle of expensive perfume to anoint Jesus’ feet.

FOR THE FULL ARTICLE – PLEASE SEE THE AUGUST ISSUE OF JOY!

It is an old adage that “hurt people hurt people.”

Those who have been emotionally damaged tend to inflict their hurt and pain on other people. For example, a large percentage of those who have been sexually abused become the abusers of others; those who suffered under an alcoholic parent often themselves cause their future family to suffer because of their drunken stupors.

Until we, as a Church, deal with the whole person as shown in 1 Thessalonians 5:23, our congregations will be filled with people who are spiritually gifted but act like emotional infants. As in other words, the Church must deal with emotional health and not just spiritual health and power.

The following are common traits that hurt people display in their interactions with others.

1. Hurt people often transfer their inner anger onto their family and close friends.
Often those around them become the recipients of harsh tones and fits of rage because they have unknowingly become the vicarious recipients of transferred rage.

2. Hurt people interpret every word spoken to them through the prism of their pain.
Because of their pain, ordinary words are often misinterpreted to mean something negative towards them. Therefore, they are extremely sensitive and act out of pain instead of reality.

For the full article, see the August issue of JOY!