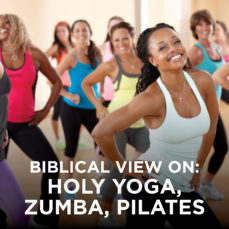 As with many things in life, there are extremes in the area of exercise. Some people focus entirely on spirituality, to the neglect of their physical bodies. Others focus so much attention on the form and shape of their physical bodies that they neglect spiritual growth and maturity. Neither of these indicates a Biblical balance.
Zumba is a popular fitness and dance programme that is held in gyms, community centres, and even some churches. How should a Christian react to Zumba? Should we participate? What about Yoga, Holy Yoga, and Pilates?
…pick up the April issue of JOY! to read the full story, on sale now!

As responsible citizens, Christians must strive to honour God in all areas of life. We are to oppose evil and work for righteousness. Christians therefore have a Biblical duty to vote. Amidst all the electioneering, unrealistic promises, media performances, slogan shouting, and empty rhetoric, it is very difficult to maintain an objective perspective on reality. Many even find it difficult to discern between what is right and what is wrong during election campaigns.
Be careful to not merely listen to what is said, but to observe what is done. Cut through the vast volume of verbiage and evaluate each party and candidate in your area on the crucial Biblical issues.
…pick up the April issue of JOY! to read the full story, on sale now!

There is significant evidence proving that the remains of Noah’s Ark have been found in Urartu, the Biblical Ararat, a region in eastern Turkey. In late 1986, the governor of the area decided to officially recognise the formation as Noah’s Ark. This is a site where one can go and see the remains, so why has most of the Christian world not heard of it?
Whatever your conclusion about the location of the ark; the flood and the ark is a sign to mankind that God punishes sin and that mankind needed to be redeemed. In Jesus Christ, God has provided the sacrifice so that we may be reconciled to Him. Every person has a choice to make: Do I accept God’s salvation plan – like Noah – or do I live as if there will never be a Judgement Day?
…pick up the April issue of JOY! to read the full story, on sale now!

…pick up the April issue of JOY! to read the full story, on sale now!