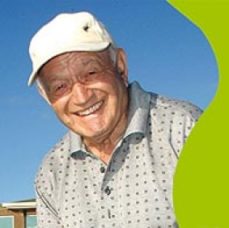 In 1927, Charles Lindbergh completed the first solo trans-Atlantic flight; the Oscars were first awarded, Pavlov discovered his Conditioning Theory with dogs; and Solly Ozrovech was born to Polish parents.

After WW1 the family immigrated to South Africa, where soon after, both parents were killed in a car accident leaving Solly (7 months old) and his older brother, Mark (4 years old), in the care of the state. The boys were supposed to be sent to a Jewish orphanage, but due to a mix-up, they were placed in a Dutch Reformed orphanage in Ugie in the Eastern Cape. The boys grew up sharing dormitories, playing sports and being taught by the church. By the time authorities discovered the mistake, the boys had already been fostered and were well adjusted. Mentored by his Grade 8 teacher, Mr Ken Carlson, Solly blossomed academically, on the sports field, as a leader and a boy after God’s heart. Over a period of eighteen months, through Mr Carlson’s prayers and guidance, Solly gave his life to the Lord. Kneeling in front of the iron bed in the orphanage, Solly decided to follow Jesus, and was baptised the same day. Solly was so touched by God’s grace, that he wanted to enter into the ministry as soon as he finished school.

Not one to ever take half measures, Solly was determined to attend the Outeniqua High School – even though the orphanage could not afford to send him. “I was due to attend the local industrial high school in George, but I knew if I ever wanted to further my studies, I would need to attend an academic school to study English. The orphanage elders laughed at me saying there was no money, but I didn’t accept this and went on a hunger fast in protest. After several days, I was so ill that I had to be hospitalised. Somehow the story was spread amongst local townsfolk, and one man offered to pay for my schooling. To this day I do not know who he was, but I am grateful that he allowed God to use him as a blessing.”

After completing university, meeting his lady love, Louise, and obtaining his Master’s degrees in English and Afrikaans, Solly returned to Ugie to run the orphanage where he grew up. There Solly and Louise strived to give children a home (rather than just board and lodging) with love and discipline. When his tenure was completed, the vivacious Mr Ozrovech led 21 tours to Israel and became a pastor of a Dutch Reformed Church in Strand, in the Western Cape. With his gentle spirit, striking humility and shepherd’s heart, Solly’s congregation increased in numbers and he became a local figure in the community. “I have always been a bit of a maverick in my life…whilst leading the church in Strand, I decided to start a telephone message service, where people could call in and listen to a two-minute Bible reading and half-a-minute prayer. These became quite popular and at one stage we had 700 calls a day – the messages reached all parts and peoples of the country, across denominations and cultures.”

It was out of these inspired telephone messages, that Elise Muller approached Oom Solly (as he affectionately became known) and asked him to create a daily devotional book. The book was an instant success and unleashed the creative writer inside Solly. Inspired by the Lord, His creation and His Word, Solly took to writing from midnight to six o’ clock in the morning, while he dedicated his days to pasturing the church. According to Oom Solly, it is perhaps his lack of sleep that has led to a lack of height! Though he may be small in height, he is certainly not lacking in spiritual stature!

The first thing that strikes you about this man of God is his humility and love for people. Throughout his life he has served others and looked for new ways to bring people to the knowledge of Christ. In the turbulent times of the 1950’s, this DRC Minister was breaking boundaries by hosting a ‘drive-in church’ during the holidays.

“So often God is left out of the church, and the human element invades what we do. I believe the church today is heading for the same fate as the Reformation Church – God is going to use His agents to sweep through and clean out the house of God. When I was a minister in Strand, I noticed that every Christmas, thousands of visitors would come to the coast and because they were dressed casually and belonged to various denominations, had no church to attend. My little church was too crowded, so one day God showed me an idea for a drive in church. One of the members in the congregation owned a drive in and we discussed using this for Sunday services. He generously donated the grounds each week and converted a stage and speakers to accommodate all the cars. Families would come from all over, bringing their children in pajamas and food for the evening. They would sit in their cars listening to the service and many were touched by God there. On average we had 4 000 people every Sunday from all ages, races and denominations. There was a strong evangelistic message in those services. It is so important that the Church gives people the opportunity to accept Christ and that pastors are prepared to preach the uncompromised Gospel.”

Having done so much in his life, one wonders if Oom Solly has time to rest and enjoy his retirement! As a leader and example to so many, Solly is strikingly humble about his status within Christian circles. His first words to me when sitting down for the interview were, “Please make sure the article points to Jesus. He is Jehovah Jireh, the Provider and He deserves the glory.”

Oom Solly is fit, healthy and full of life. He was a Western Province Referee for many years, an avid squash player, a keen fisherman and today, an impressive 16 handicap golfer. “Golf is a great sport…it breeds honesty, patience and forces people to be social. From the tee-box to the putting green, people open up their hearts to you, and there is always an opportunity to display Christ.” When not on the golf course, Solly is in his study, surrounded by books and overlooking the lapping ocean.

It is easy to see where his passion comes from, but I want to know where he finds inspiration when God feels far away? “We all experience times of testing and drought. Instead of running from God, I encourage you to run to Him. Draw even nearer, and bow your knee before Him. God knows what you go through, and He has your best interests at heart. We lost a daughter and it was a tough time, we could not understand why it happened. You dedicate your life to God, and you lose a loved one. It is not easy to stay strong…but you must not let your mind and heart trick you. God will never forsake you. Now is a time of testing for believers and for their faith, but just keep pressing on. Your rewards come from heaven.”